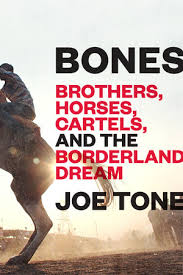 There are plenty of reasons for the Texas literary community to celebrate recently. Bones: Brothers, Horses, Cartels, and the Borderland Dream (One World) by Joe Tone, formerly an editor at the Dallas Observer, is a finalist for PEN America's 2018 PEN/ESPN Award for Literary Sports Writing. The winner will be announced February 20 in NYC.

How to Get Rid of Mice – 5 Methods
Landmark beach Lagos: All you need to…
“The Friend Who May Not Seem a Friend…
Short Happiness Quotes From Famous an…
6 Benefits of Farm Recruitment Agency
The Mystery Writers of America have named three books by Texas authors as 2018 Edgar Allan Poe Award finalists. The Dime (Mulholland Books) by Dallas's Kathleen Kent is nominated in the category of Best Novel. Also nominated for Best Novel is Bluebird, Bluebird (Mulholland Books) by Texas native Attica Locke. The Road to Jonestown: Jim Jones and Peoples Temple (Simon & Schuster) by Fort Worth's Jeff Guinn is nominated in the Best Fact Crime category. The winners will be announced April 26, also in New York.

The Texas Institute of Letters (TIL) announced a class of nineteen inductees for 2018. The new members will be inducted at the group's annual meeting, April 6-7, in San Antonio. Congratulations are in order for Daniel Chacón, Alfredo Corchado, Marcia Hatfield Daudistel, Katherine Hoerth, Michael Hurd, Bret Anthony Johnston, Richard Linklater, Sheryl Luna, Kirk Lynn, Guadalupe Garcia McCall, Willie Nelson, Severo Perez, Sasha Pimentel, José Antonio Rodríguez, Mary Beth Rogers, Steven Schneider, Ted Shine, José Skinner, and Christian Wiman.
Willie Nelson is the first songwriter to be inducted into the TIL. The Dallas Morning News has the scoop on the rule change that allowed Mr. Nelson's inclusion. Blame, or thank, Bob Dylan and the Nobel Institute. Meanwhile, Sandra Cisneros has been named the winner of the prestigious Lon Tinkle Award for Lifetime Achievement, the highest honor given by the TIL.