Dark Between Oceans launches in just 3 days! (Plus, a sneak peek)

Woohoo!!! I’m excited. Are you excited?

Early reviews have been fabulous, and I’m really stoked that I’ve managed to (pleasantly) surprise people. In the words of one reviewer:

Whatever you expected, whatever you thought might happen to Kuma forget it all.

Read below for a sneak peek. 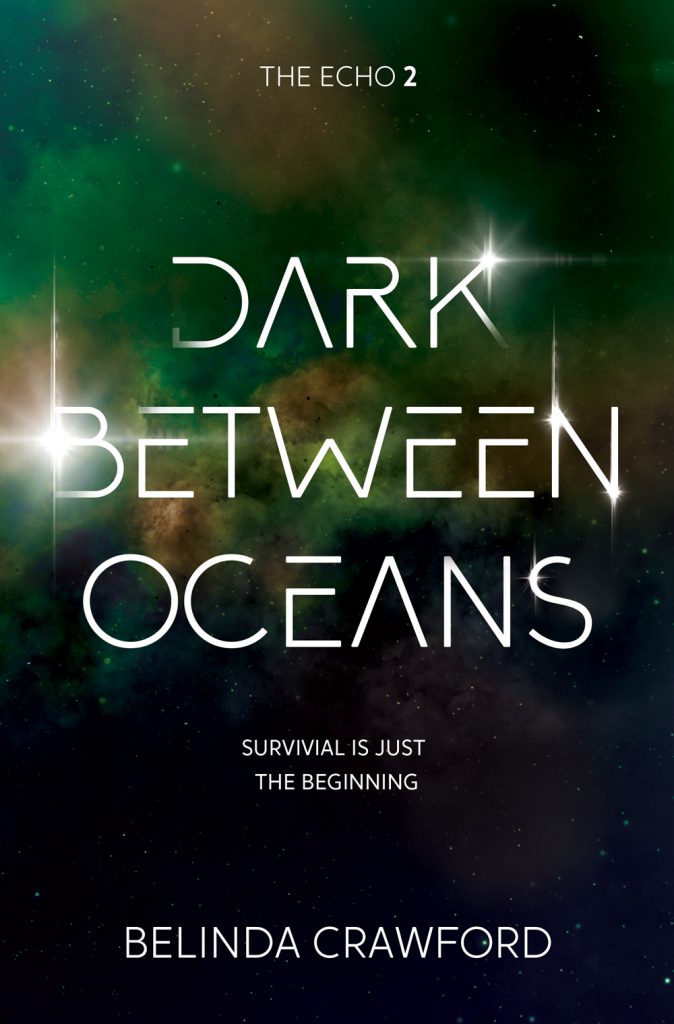 Available at your favourite retailer.

I don’t know how long I’ve been floating in the stasis unit, talking to the dark. A day? A week? A year? It’s hard to tell with the power out and no chronometer to count down the hours. It feels like years. Years of nothing.

I know it’s longer than a day because the food ran out long enough ago that I no longer feel my stomach gnawing at my backbone. I’ve gotten used to it. Used to the gurgle of stomach acids, the growl of gases. At least it’s another sound, something other than my own breathing, the hum of silence. Yeah, who knew silence had a sound. I didn’t. Not until Core shoved me in the stasis unit and ejected me into space. Alone. Always alone.

I should have crawled into one of the pods, closed the door and drifted off into stasis/sleep. But I didn’t. Couldn’t.

Mum was out there, and Dad and Grea. And Dude, a little part of me whispers, but I shove it back.

Dude’s dead. Sucked into vacuum, the liquid in his body boiled away before it froze, hard as rock, cold as space. Or, if the fug got him first, torn apart piece by piece and fed to the alien ship floating out there, hovering over me. Us. Eating Citlali to repair itself, tearing apart my home to make itself whole.

Was it my fault? I haven’t decided yet.

The word shivers through the darkness, through my bones, my blood, familiar as my own thoughts. Still, it makes my skin crawl, my insides shrivel, makes me want to cover my ears, curl in a ball and scream. Except the word isn’t in my ears, it’s deeper than that. It’s in my brain. My heart. Crawling around inside me, trying to worm its way into the very core of my being, my anima, the thing that makes me, me.

I can’t escape it. It follows me everywhere, a presence in the back of my skull, in the space between the psionic plane and the other place, the one beyond the threads of reality, a dark, endless space where everything is possible.

I should have gone into stasis/sleep, should have slipped into the pod the moment hunger started gnawing at my belly, should have drowned myself in biogel and neurochemicals. Should have left all of this behind. Except I wouldn’t have, couldn’t have. I know, in the pit of myself that Aeotu would have followed me even there. But maybe, if I’d been in stasis, I could have reached out, connected with the others, with Mum, with Dad. With Grea.

But I didn’t. I was too scared. Not of Aeotu, although the alien AI is part of the reason. No, I haven’t slept, haven’t let myself go into stasis because… Because then I’d know. If they were alive. If they were dead. I don’t want to know. If I don’t know, I don’t have to believe, don’t have to think about life without them, without Grea. Don’t have to be all alone…

Sister. The voice comes again, shuddering through the air, chilling my skin.

No. I say back to it, leaving the thought in my head, letting it echo there.

I haven’t talked to it before, save to yell at the steelcrete bulkheads, to scream and curse and beg. Not since I slipped into its mind, not since I planted the image of Citlali in the deepest part of its being and told it that the ship was home. Not since it woke up. Not since I woke it up.

That hasn’t stopped it talking to me. Always the same word, always knocking on the back of my skull. And before the emergency power went, leaving me floating here, the air getting colder and colder, it had used the comms.

The word is louder this time and there’s an insistence to it that hasn’t been there before. An urgency.
Aeotu can go to hell.

I curl into a ball.

There’s no feeling in my legs, almost none in my hands. With the emergency power gone, there’s nothing to keep the atmosphere inside the stasis-unit-turned-escape-pod stable, nothing to recirculate the air, nothing to keep it warm.

The air is getting colder, all the warmth leeching into the vacuum of space. All that’s left is the little bit in my body, my heart pumping the blood around. Even the air in my lungs has icicles, I can feel the sting in my throat. I’d probably feel them in my nose, if I could feel my nose.

I really should have gotten in the stasis pod. But what then? I’d die in my sleep? Die knowing my parents were dead? My twin? Every soul I’d ever known, gone? I don’t want that. I want to remember them alive, want to believe that when Core jettisoned me into space, that somehow, someway, she kept everyone else safe too.

The worry, the memory of that last frantic run through Stasis deck, the holes and cracks in the units around me, the glimpses of other pods with their thin electric shields. It haunts me, sometimes it haunts me enough to get in the pod, to find out what had happened to everyone. But never enough to close the door and power it up.

I don’t feel the cold anymore. I don’t feel much of anything. I stopped shivering at some point, probably around the same time my eyelids grew heavy, and staying awake took everything I had. No one really tells you that about freezing to death, about how, at some point, it’s just like laying down in your bed, soft and warm and all too easy to close your eyes, to drift away.

…Dreams are nice though. I’m huddled up next to Grea, her arms around me, my arms around her, our foreheads pressed together. Sharing breath, sharing thoughts. Sharing everything.

‘Hey fathead.’ She smiles at me.

‘It took you long enough.’

‘Doing what? Playing with your hair?’

‘It’s prettier than yours.’

Her eyes are dark, darker than the void of nothingness around us. Black, like mine. Wide, the lashes resting against golden cheeks. It’s not just the extreme pigmentation that makes her eyes like that, or the way light bounces off the surface of her iris. There’s something buried deep in her mind, something she’s trying to keep from me. But she can’t keep anything from me. We’re twins, identical twins, a single living being split in two.

I don’t say anything, I don’t have to. My disbelief floats between us.

She turns away, so my forehead is pressed to the side of hers, the long silky strands of her hair getting messed up in my nose, some of them catching in my mouth.

It doesn’t take much. Slipping into Grea’s mind is as easy as breathing. Easier. She doesn’t even try to keep me out.

She can hide shit though, hide it like crazy, and if she really wanted to, if that thing making her eyes dark was really private, she’d have done it. But she hasn’t. She wants me to see, to know, even if she can’t bring herself to say the words.

She’s going to make me pay for it though.

The forefront of her thoughts is a jumble of emotion, all the fear, all the pain rising from the depths of her being formed into a shield around the darkness.

I try to pull away, but suddenly she’s everywhere, gripping me tight, her face mashed up against mine, her mind wrapping me in claws of steelcrete. And, Old Terra, it fucking hurts.

Rage hits me in the middle. Grea’s rage, tearing at me, reaching back along the path my brain has taken into hers. It stabs me in the heart, splintering into a million tiny pieces, seeking the core of me, the frozen place in my middle. Trying to light it on fire.

She growls, teeth bared, her arms bands of steelcrete. ‘I’m saving you.’

‘You’re already dead.’ The words are out of me before I know it, rushing from the dark, scared place at the pit of my anima.

‘No, I’m not. You’re just scared I might be dead and too chickenshit to actually. Find. Out.’ Those last words she punctuates by punching my shoulder, fist driving into the flesh with hard, meaty THUMPS.
Pain. Pain and fear ricochet through her, to me. And that thing – curled behind her eyes, wrapped in her emotions – explodes between us.

I want to retch, to dissolve, to be anywhere but here, to know this.

‘No.’ I shake my head, forehead rubbing against hers. ‘You didn’t. You couldn’t.’

‘You showed her how.’

‘She’s trying to survive, and now she’s trying to help us survive, because of you. You, Kuma.’ Grea catches hold of my face, pinning me with her stare. It’s not just my Sister looking at me out of her dark eyes, it’s the other thing too, something big. Older. Alien.

I whisper its name. ‘Aeotu.’

It breathes, wrapping around Grea, moulding her. Changing her arms, her hands. It wriggles under her face until there’s a second set of eyes beneath Grea’s, another mouth, another nose. A whole second face peering from underneath her skin.

‘Sister,’ it says, and reaches for me.

Want more? Buy Dark Between Oceans at your favourite retailer.
(the link above will take you to the retailer of your choice including Amazon, iBooks and Kobo.)

Dark Between Oceans launches in just 3 days! (Plus, a sneak peek)

Subscribe to Belinda Crawford | Author Of The Hero Rebellion, A