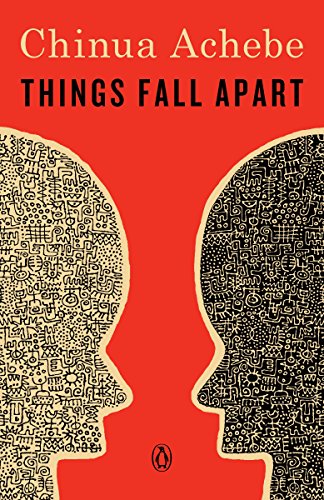 Things Fall Apart by Chinua Achebe is a constant on the must-read book lists. It is a seminal piece of work, and has had staying power because. It’s the first time that any author demonstrated how European colonization impacted the natives. Achebe wrote the book from the perspective of someone from the country that was colonized.

In Your House: Beware of Dog
The Happiness Cart – Falooda Express
How to Leverage Entrepreneurship and …
Cat Coronavirus Diary – Day 19

Other authors wrote about this topic, but they came at it from a different perspective. Joseph Conrad’s Heart of Darkness (Review) – which I found offensive because of the way he depicted black people – was one of those books.

With the demonstration going on around the world, I thought I’d add this book review that I wrote more than seven years ago.

What is Things Fall Apart by Chinua Achebe About?

Things Fall Apart by Chinua Achebe is a story about the clashing of cultures. The clash between the Ibo society of Umuofia, a group of nine villages in Nigeria, and European colonization and Christianity. And the falling from grace of both an individual and a society, and the reason for both. First published in 1958, the story covers the end of the 19th century, and is through the eyes of the warrior, Okonkwo, from the village Iguedo. 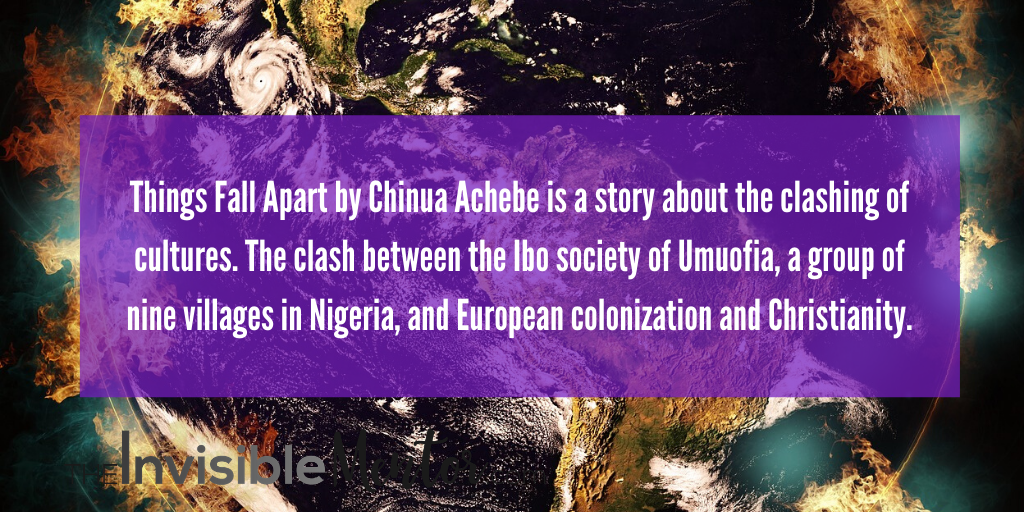 While growing up in the village of Iguedo, Okonkwo was very ashamed of his father, Unoka. He considered his father to be very lazy. Iguedo vowed that he would lead a very different life, one where he would provide for his family. Many boys had a better start than Okonkwo because their fathers would have given them lands. But despite this, Okonkwo was able to rise and become known and respected. He was a man of action and a man of war.

The story depicts the ways of the Iguedo people who believed in gods and were very fearful of the wrath of these same gods. It was also a very patriarchal society where men ruled the household and women did their bidding. Although Okonkwo was very brave, I didn’t like his character as a person. He was quick to anger and abused his family whenever they slipped up.

And he knew exactly how to kill a man’s spirit. He ruled his household with a heavy hand. So they were perpetually fearful of him. I loved the spirit of his second wife Ekwefi, who had a mind of her own, although she would suffer for it.

To understand and appreciate Things Fall Apart , we cannot look at it with today’s lens. A lot of the things that the villagers did would be considered illegal today. And they were a highly superstitious people who offered sacrifices to gods. When a woman had twins the newborns were thrown into the Evil Forest. It was generally accepted that men could beat their wives and children.

Each year, they celebrate the Week of Peace in Umuofia. One year, Ekwefi went away to get her hair done, when she should have been preparing Okonkwo’s meal. His first wife tries to cover for her. But Okonkwo is not fooled. When she returns home he beats her mercilessly. And that is a no-no during the Week of Peace because it’s a time when they live peacefully with everyone, to honour the gods. As punishment for his deeds, Okonkwo has to

“bring to the shrine of Ani one she-goat, one hen, a length of cloth, and a hundred cowries.”

A man from another village kills the wife of Udo from Umuofia.

“…Okonkwo had  been chosen by the nine villages to carry a message of war to their enemies unless they agreed to give up a young man and a virgin to atone for the murder of Udo’s wife. And such was the deep fear that their enemies had for Umuofia that they treated Okonkwo like a king and brought him a virgin who was given to Udo as a wife, and the lad Ikemefuna.”

It’s important to have different perspectives on books. If you’re not a reader, you can find a synopsis of many books from Readitforme that you can listen to. Click the link to join. This is a great way to learn the latest thinking on many topics.

It was the intent of the leaders in Umuofia to kill Ikemefuna. Ikemefuna is placed in Okonkwo’s care and for three years the lad is treated like one of his children. At the end of the three years, the leaders decide it is the right time to kill the boy. One of the elders, Ogbuefi Ezeudu, visits Okonkwo and warns him not to participate in killing Ikemefuna. The warrior doesn’t heed the wise man’s warning and is actively involved. Shortly after, Ogbuefi Ezeudu dies and at his funeral, during a gun salute, Okonkwo accidentally shoots and kills the deceased man’s 16 year old son.

Since the shooting is accidental, Okonkwo is exiled from Umuofia for seven years. He takes his family and his prized possessions to the village of Mbanta where his mother was from. And he prospers there and waits to return to his community. 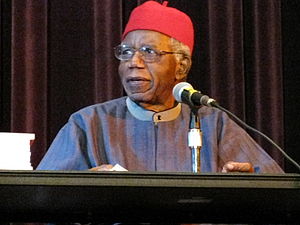 Things Fall Apart  by Chinua Achebe is divided into three parts. In the first two sections, the novel depicts the life of the Ibo people at the end of the 1800s, before colonization and the invasion of missionaries.

Missionaries from the West and colonial administrator arrive and disrupt the ways, beliefs and life of the villagers, who do not know how to adapt to change. The villagers are viewed as primitive. Yet as the story unfolds, Achebe skillfully demonstrates the weaknesses in both systems, that of the villages and those of the new arrivals. There is no true dialogue between both parties.

After the exile, Okwonko and his family return to Umuofia and find a very changed place. He has also lost his standing in society and is very determined to reclaim it. There is a clash between the villagers and the Christian missionaries and colonizers. Okwonko also doesn’t know how to adapt to change or even want to.

“He [Okwonko] sprang to his feet as soon as he saw who it was. He confronted the head messenger, trembling with hate, unable to utter a word. The man was fearless and stood his ground, his four men lined up behind him. In that brief moment the world seemed to stand still, waiting. There was utter silence….The spell was broken by the head messenger.

‘Let me pass!’ he ordered. ‘What do you want here?’ ‘The white man whose power you know too well has ordered this meeting to stop.’ In a flash Okonkwo drew his machete. The messenger crouched to avoid the blow. It was useless. Okonkwo’s machete descended twice and the man’s head lay beside his uniformed body…. Okonkwo stood looking at the dead man. He knew Umuofia would not go to war….He heard voices asking: ‘Why did he do it’…” 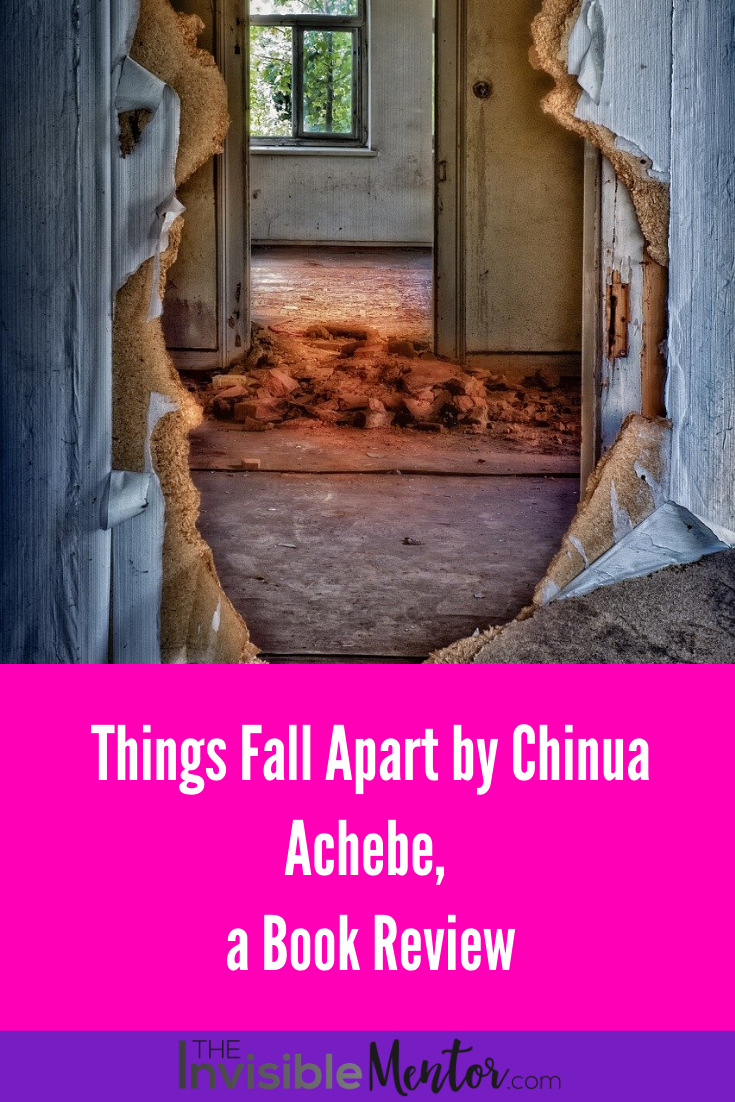 Before there is any repercussion for his actions, Okonkwo commits suicide. Societies disintegrate, and people disintegrate when they do not communicate and compromise with each other.

I recommend Things Fall Apart by Chinua Achebe because it gives us insights into how a society is impacted by colonization from their point of view. It also demonstrates the importance of open dialogue with people who are perceived to be different from us.

There Was a Country: A Memoir

No Longer at Ease

A Man of the People

Girls at War and Other Stories

Chike and the River

Anthills of the Savannah