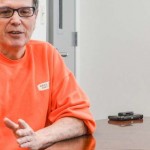 Going to Prison is tough – but leaving prison and succeeding outside the walls can also be a struggle – especially for people with a criminal record that can make getting jobs and housing difficult. To ease that transition and help set Inmates up for success, the Coweta County Prison is holding four-week “Re-entry” classes for inmates who are nearing their release date.

“The state wants everybody to do it, but every prison doesn’t,” said Deputy Warden Larry Clifton. “This is something we took on.”

Clifton became deputy warden in April, and he and Warden Bill McKenzie discussed several programs that McKenzie wanted to start, including a GED program and the re-entry class.

The GED classes started in June and are led by inmates Johnny Anderson and Rick Rubisch – whom some have given the nickname “Professor.”

“It is on their own time. It isn’t their job – it is something they choose to do,” Clifton said of the inmate instructors.

Capt. Ryan Alexander, one of the prison’s counselors, oversees the re-entry program.

“Alexander has done a great job,” Clifton said. “He and Rubisch worked together and got this thing going.”

The state puts out a guide for re-entry classes, and Alexander said they have tailored the program to fit the setup of the Coweta County Prison.

Inmates learn about the barriers they are going to face upon release, as well as tools and resources to help overcome those barriers, Alexander said. Those include job searching skills, goal setting, managing finances and furthering their education. Classes are two hours a week for four weeks.

For the first class, representatives from the U.S. Attorney’s office and a former federal prison inmate visited for a screening of a documentary, “Released: When does the Sentence End.” In the documentary, ex-offenders are interviewed about the hurdles they face and what they did to overcome those challenges.

“They present the truth: there are going to be hurdles,” Alexander said. When a prospective employer sees that an applicant has been in prison, “it brings up a huge wall.”

The documentary and the former inmate are there to tell the inmates – “don’t let it stop you. Keep pushing, keep wanting to get to that goal,” Alexander said.

For the second week, representatives from the Georgia Department of Labor visit and talk about all the resources and programs that the DOL has for former inmates.

Through the Top Step federal bonding program, employers can hire inmates without worrying about financial liability. There are also some tax credits available.

Re-entry students also get help on resume writing, and have a resume to take when them when released.

In the evenings, after everyone is back from work details, lots of work goes on for resumes and GED classes. “There’s a lot of homework involved,” Rubisch said “We have some that are study-aholics.”

“I can’t say enough about Rubisch,” Clifton said. “He’s a really smart man who has a huge heart to help people. He gets them fired up, and he gets them to dedicate all this extra time – it’s not something we make them do.”

“A lot of these guys will say ‘I’ve never written a resume, I’ve never been in a job interview,’” Alexander said. The re-entry classes “give them the tools and a chance to be able to go do that – not just getting released and saying, ‘Well, what now?’”

Representatives from the Department of Community Supervision, which oversees parole and probation, come out to talk to inmates about how probation and parole will work once they get out, how they can help them, and about how to get housing.

Week three is about finances and goal setting. Inmates work on setting a budget and talk about education opportunities.

“For a lot of these guys – just as for some people on the outside – they’ve never really done a budget,” Alexander said. “For anybody, it helps to see where your finances are coming in or going out. It’s more stuff to help them get back into a regular life.”

In the final week, “We do 10-minute mock interviews with each person,” Alexander said. “Some of us from the facility come in, and we try to invite other people from the Department of Community Supervision to come in and help with interviews.”

They tell the inmates to expect to get asked about their time in prison.

“Nobody wants to put this on their resume, even though this is probably the most valuable experience they have,” Rubisch said.

“We say don’t lie about it – use it as a way to sell yourself,” Alexander said. Through the work details at the Coweta County Prison, many inmates learn marketable skills, including road work, heavy equipment operation and automobile repair.

Inmates are asked to talk about their strengths and weakness, and after the interview they are critiqued about better ways to answer certain questions.

Rubisch said a primary goal in the class is to keep it real. “Sometimes people have this illusion that everything is going to be great when they get out of here. They don’t realize the people that they left out there are expecting a change.”

If you don’t change your way of thinking, you could be right back in prison, he said.

“Somebody’s got to care about these guys,” Rubisch said. “It’s very important what they do here.”

According to Clifton, some of the younger inmates have never really worked.

The classes help them understand what it is going to be like to go out and find a job and how they will need to act. “That is huge,” Clifton said.

Some of the students get excited and put in a lot of extra time on their resumes. “It gives them that hope that there is something outside of prison,” Clifton said.

And some are just ready to get out.

Clifton says the re-entry classes seek to show the inmates that there are tools available to help them have a life outside the prison walls.

“It puts them in a different mindset of what life should be and can be once they are released,” Clifton said.

Alexander and the prison’s other counselor, Lathel Gardner, took the program and ran with it, Clifton said. “I want my people to have credit for that. They work hard for it.”

“As a prison, one of our main priorities is keeping the community safe and helping to get these guys a good start – that is why we’re doing that,” Alexander said.