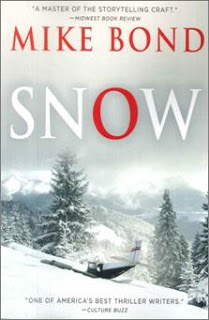 SNOW
By Mike Bond
Mandevilla Press; October 2017
$15.99; 250 pages
ISBN: 978-1-62704-037-2
About the book:
Deep in the Montana wilderness, three hunters find a crashed plane filled with cocaine. Each has  a reason to claim it for himself. They soon learn that there’s no such thing as easy money when they find themselves hunted by a Mexican Cocaine Cartel, the DEA, Las Vegas killers, their guide, and the police of several states. The thieves flee from coast to coast with their adversaries in stubborn pursuit as Mike Bond delivers another knock-out, multi-layered adventure in SNOW.

VIDEO: Mike Tyson Bloodies Passenger’…
WTF Fun Fact 12578 – Mike the Headles…
When they found the plane, they thought their problems were over. Zack, former NFL star now a TV sports icon, owes $2 million to some nasty people in Vegas.  Steve, a Wall Street broker, may have lost all of his and Zack’s investments. Curt, their guide, a half-Cheyenne mountain man, is trying to save his ranch from an energy company takeover.
The truth is that their find put trouble in hot pursuit. Diego is an executioner for the cocaine cartel. Maria Christina, a Harvard grad and Yale MBA, runs the cartel. Whitney Castro grew up in the Denver slums and is now a brilliant and dedicated DEA agent. Kenny Stauffenberg is an easy-going Montana sheriff who never gives up a hunt.
From the frozen peaks of Montana to the towers of Wall Street, the slums of Denver and the million-dollar tables at Vegas, SNOW is an electric portrait of today’s American culture, the invisible line between good and evil, and what people will do in their frantic search for love and freedom.
About the author:
MIKE BOND is the bestselling author of Saving Paradise, House of Jaguar, The Last Savanna, Holy War, Tibetan Cross, Killing Maine, and Assassins. He is a war and human rights journalist and ecologist who has lived and worked in many dangerous and war-torn regions of the world. His critically acclaimed novels depict the innate hunger of the human heart for good, the intense joys of love, the terror and fury of battle, the sinister conspiracies of dictators, corporations and politicians, and the beauty of the vanishing natural world.
Buy your copy of Snow.
**This post contains affiliate link(s).**