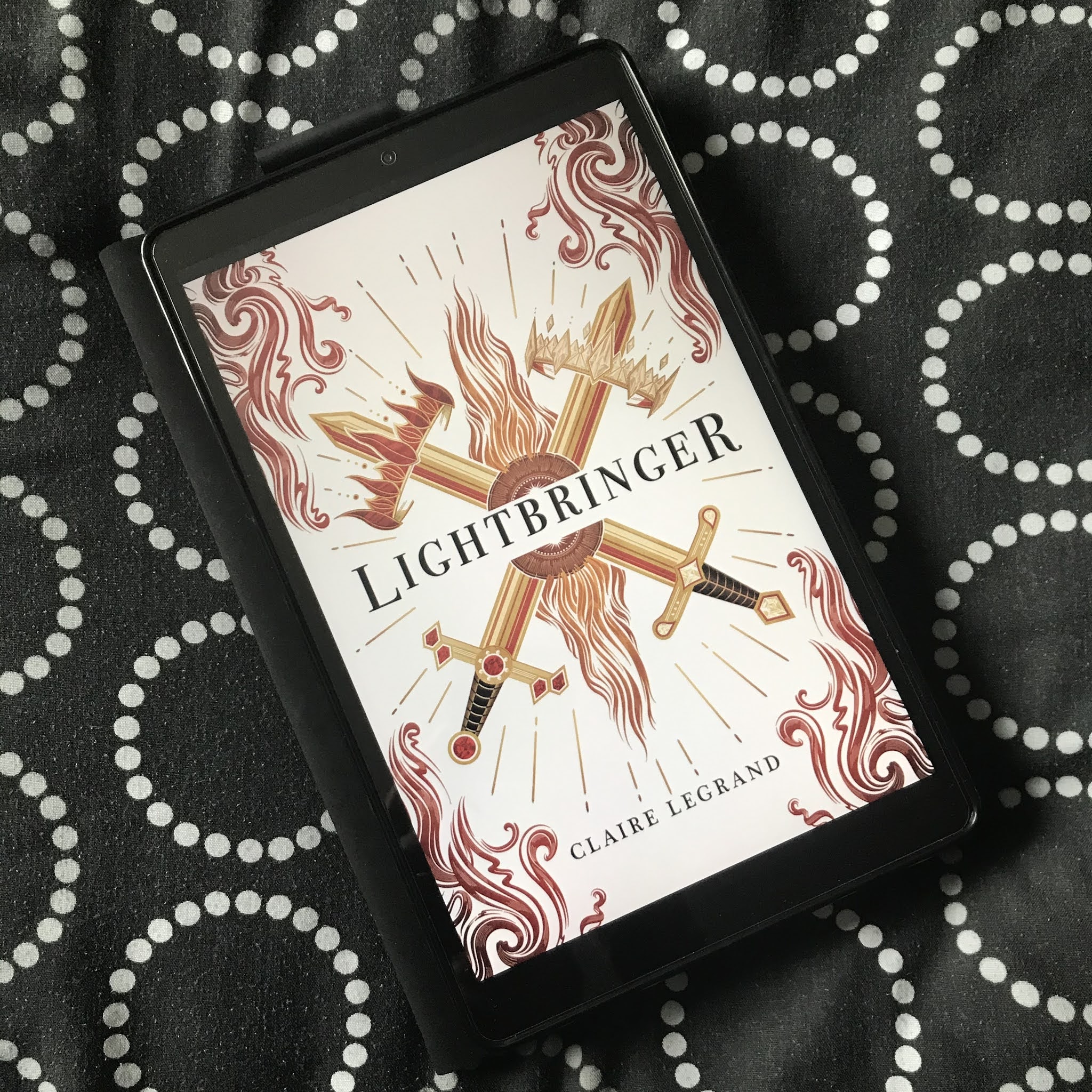 Two queens, separated by a thousand years, must face their ultimate destinies.

Queen Rielle, pushed away from everything she loves, turns to Corien and his promises of glory. Meanwhile, whispers from the empirium slowly drive her mad, urging her to open the Gate. Separated from Audric and Ludivine, she embraces the role of Blood Queen and her place by Corien's side, determined to become the monster the world believes her to be.

In the future, Eliana arrives in the Empire's capital as a broken shell of herself. Betrayed and abandoned, she fights to keep her power at bay--and away from Corien, who will stop at nothing to travel back in time to Rielle, even if that means destroying her daughter.

But when the mysterious Prophet reveals themselves at last, everything changes, giving Rielle and Eliana a second chance for salvation--or the destruction their world has been dreading.

An epic fantasy with female protagonist, the Empirium Trilogy has captured the hearts of many and Lightbringer concludes this beloved teen fantasy series. The StoryGraph

My other reviews of The Empirium Trilogy:
Furyborn | Kingsbane

WARNING! I cannot review this book without spoiling the others in the series. Read no further if you're planning on reading this series and don't want it spoilt for you.

Trigger/Content Warnings: This book features vomit, depression, self-harm, torture, murder, and war.
Having adored the first two books in The Empirium Trilogy by Claire Legrand, I was so excited for the final book, Lightbringer! Though it wasn't the book I expected, it was absolutely incredible!

To be honest, I don't entirely know what I expected. We've known from the very beginning in Furyborn that there was a prophecy of the two queens. We've known that Rielle became the Blood Queen, and that her daughter Eliana was hoped to be the Sun Queen. What I didn't know was how Rielle would end up becoming the Sun Queen and causing so much devastation, nor how Eliana would end up defeating Corien - especially after the cliffhanger ending of Kingsbane, where we discover that Simon has been working for Emperor Corien all this time, and has abducted to Eliana to bring right to him. How on earth is Eliana going to be able to defeat him when she's in his clutches, and doesn't yet have full control of her power?! That cliffhanger came out of left field for me, and I honestly didn't have a clue what would happen next.

Kingsbane is a very different story than the previous two, for the reason that both queens are in Corien's hands. After Audric hears the truth about the death of his father, in his anger and grief, he calls Rielle the monster people are starting to believe she is, and she runs to Corien. As Corien has what he wants in both timelines, there's a lot less action overall. There's definitely moreso in Rielle's timeline, but not as much as we've seen in previous books. Eliana is continuously tortured mentally and physically by Corien, who is desperate for Eliana to use her power. Rielle's power grows ever stronger, and Corien convonces her to use it for ill time and again. The more she uses it, the more it grows, and the more she realises her power has a conciousness, one that is slowly carving away at her sanity.

But as we've seen in previous books, both queens have loved ones and allies, those who will bend over backwards to try and save their people, or fight for their queen - in all meanings of the word. So we have quite a few more narrators in Lightbringer, to see what is happening elsewhere, and how people are preparing for what is to come. Besides Rielle and Eliana, Audric has the most narration compared to everyone else, and he's not doing well. The love of his life killed his father, is now in the hands of their worst enemy, and is very likely the Blood Queen. His kingdom has been taken from him by Merovec, Ludivine's brother, and he's had to run for his safety - but those left behind are under the rule of an ignorant and suspicious new ruler, and are in danger. Audric struggles to deal with all that has happened, and falls into a deep depression. But there isn't time. His people need him. Now Rielle is with Corien and how he has her ear, it's only a matter of time before the Gate is opened, and the angels are released, and there will be war. It's so difficult to see those around him not understanding what he's going through, but needing him at the same time - needing him to take lead, to strategise, to come up with a plan of action, when he can't even get out of bed.

But I loved his chapters, because we see the other half of Rielle's timeline's story, and the lead up to the war. On top of that, I feel we get something from Lightbringer we don't get - or get only briefly - from other high fantasies when it comes to war; the very real fear for your own life, the fear for those fighting with you, the fear you may lose. I love high fantasies where the good vs evil trope climaxes in wars and battles, and seeing strategy play out, but even though the main characters are involved in those battles, there's still a distance to it; it's about strategy and manoeuvering. But with Lightbringer, you're deep in it, alongside Audric, as those around him fall, as he fights, as he sees individuals he cares about fighting. It's emotional and it's difficult, and it was brilliant.

Something else I loved about Lightbringer was the idea of the consequences of time travel. I can't talk about this in too much detail without spoiling the story, but time travel is definitely something that fascinates me. The idea of the butterfly effect, how a small change, something that could seem as insignificant, could have very real and very drastic consequences. Honestly, it just blows my mind with how clever authors can be when it comes to time travel, and I just love it.

The ending was fantastic. It absolutely wasn't what I was expecting at all, and I adored it. It's just so clever! You think you know what's coming, but do you? Do you really? With the Lightbringer, it's best to leave all expectations behind. I had one theory right, but everything else was a surprise for me. The climax was really something, and just genius. It was absolutely the right ending, but it did leave me feeling a little sad, especially when it comes to a number of other characters. But honestly, it was beautiful, and I love it!

And one that leaves so much scope for more stories! I've no idea if Legrand has any plans to write a companion series, but there is so much she could do! She's created a world where there are so many layers, of time and place and more, and there's so, so much she could explore here! That's not to say that there's no proper conclusion to this series, there definitely is. But I think of at least four different avenues Legrand could explore relating to this series if she chose to. So much scope. So many possibilities. And I find that so exciting! I hope Legrand does consider some of them, because we could have a completely different story, absolutely completely different, but with links to this one. And I love it when you can see the stories that are possible, after the end of the story. While the book has ended for us, the story hasn't ended - life goes on and continues for those around after. What happens next? And where? And when? Even if we don't get those stories, I like knowing those possibilities are there.

Lightbringer, while completely surprising in so many ways, is an incredible conclusion to this trilogy, and I just loved it! And I'm so looking forward to what Legrand gives us next!