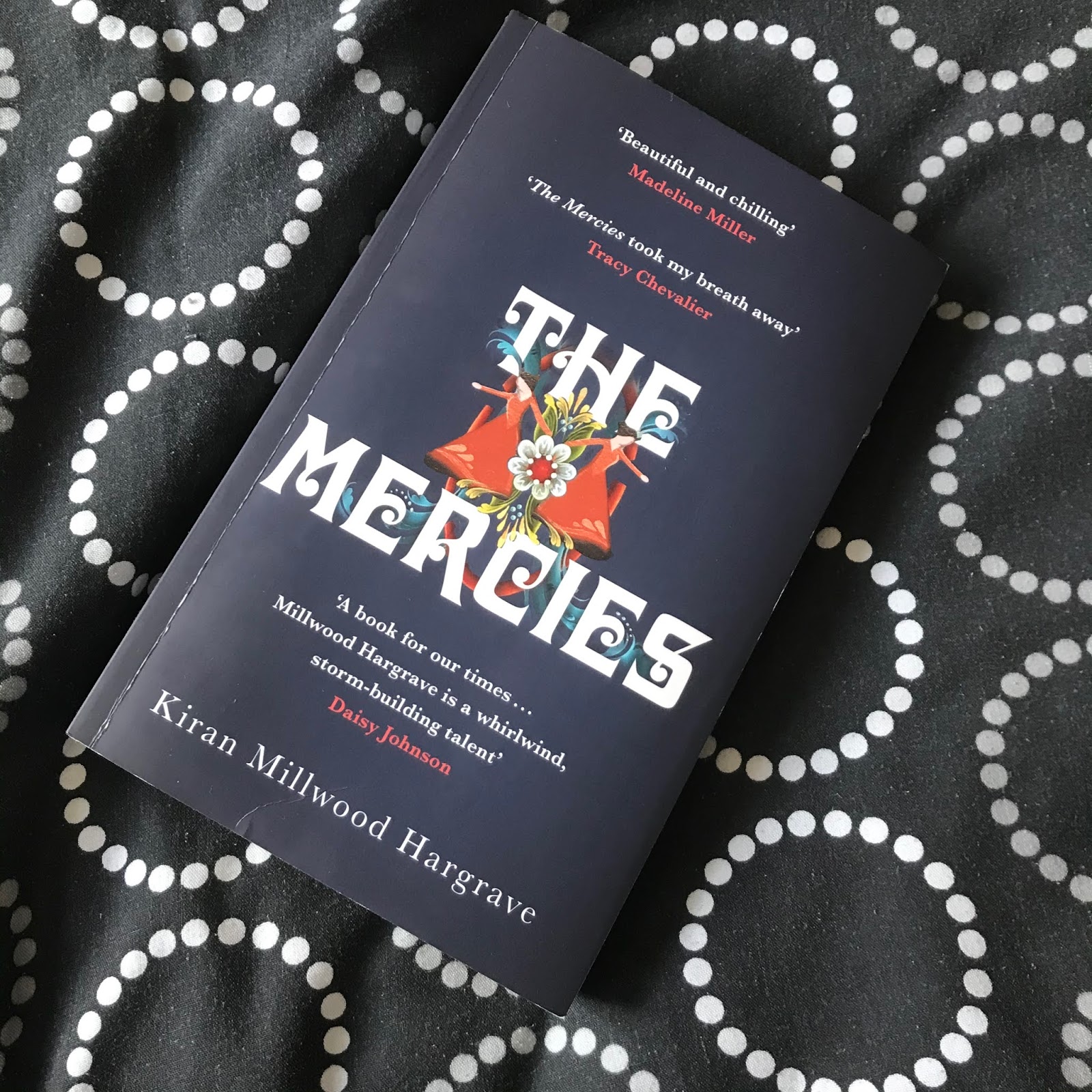 The Mercies by Kiran Millwood Hargrave

Finnmark, Norway, 1617. Twenty-year-old Maren Magnusdatter stands on the craggy coast, watching the sea break into a sudden and reckless storm. Forty fishermen, including her brother and father, are drowned and left broken on the rocks below. With the menfolk wiped out, the women of the tiny Arctic town of Vardø must fend for themselves.

Three years later, a sinister figure arrives. Absalom Cornet comes from Scotland, where he burned witches in the northern isles. He brings with him his young Norwegian wife, Ursa, who is both heady with her husband's authority and terrified by it. In Vardø, and in Maren, Ursa sees something she has never seen before: independent women. But Absalom sees only a place untouched by God, and flooded with a mighty evil.

As Maren and Ursa are drawn to one another in ways that surprise them both, the island begins to close in on them, with Absalom's iron rule threatening Vardø's very existence.

Inspired by the real events of the Vardø storm and the 1621 witch trials, The Mercies is a story of love, evil, and obsession, set at the edge of civilization. From Goodreads.

I received this proof for free as a bookseller's reading copy from Picador for the purposes of recommending/handselling. I review all books I read honestly on my blog.

Trigger/Content Warnings: This book features dead animals, including discussion of slaughtering, skinning, and butchering reindeer; vomiting; breastfeeding, and the implication that it's shameful to breastfeed in public; fatphobia; use of the word g*psy, but approproate for the time; racism against the Sámi people; miscarriage; consensual f/f sex scene; numerous examples of unwanted, painful sex within marriage (not considered rape for the time); predatory looks and rape hinted at; mention of someone being burned as a child by another child throwing boiling water over them; mention of torture through branding; torture through forcing someone's head under water; ducking - binding an accused witch and throwing her into the water to see if she drowns of floats; suicide; manslaughter by blows to the head, murder by strangulation, and murder by burning at the stake.

WWE Monday Night Raw preview and sche…
Good health and fitness is worth figh…
Empire of Language- Prelude-Metaphors…
Romantic Interior Design
Exhibit D: Lipstick and rifles--Ukra…
When I first heard of The Mercies by Kiran Millwood Hargrave, I was instantly intrigued. I also felt duty bound to read this fictional story based on real events, to remember and honour the lives of those taken in witch hunts. It's a terrible, heartbreaking, but beautiful that had me completely gripped.

On Christmad Eve, 1617, in Vardø, Finnmark, a storm appears very suddenly out of nowhere, killing the 40 men in their boats out fishing. For Vardø, it is a tragedy with drastic consequences. With only elderly men and male children left, the women of Vardø must learn how to survive and fend for themselves, through their all-encompassing grief. Maren lost both her brother and her father in that storm, and her family - her mother, her Sámi sister-in-law Diinna, and Maren - are struggling in their grief. For all intents and purposes, her mother and Diinna stop living, and Maren, joining other women in learning how to fish and provide, is all that keeps them going.
But an island of women living - surviving - without men is ungodly, and with a Sámi in their midst, witchcraft is strongly suspected. Just married to the newly appointed Commissioner of Vardø, Absalom Cornet, Ursa is the well brought-up daughter of a struggling merchant - she is used to not having the fine things most would expect her to have, but although her life was quiet and lonely, she didn't need much more than her sister, Agnette. But now she is in the perpetually cold Vardø, living in a house with a single room, to an uncaring and ungentle man filled with anger and a thirst for the lives of witches. This is not the life she expected when she was married to a Commissioner. But she doesn't expect the deep friendship she finds in Maren, a friendship that slowly, quietly blossoms into more - a love she never knew existed. As Maren and Ursa grow closer, tensions in Vardø rise, and it isn't long before everything falls apart.

In the great scheme, not a huge amount happens in this book. But The Mercies isn't about witch trials, it's about the people, and as devastating and tragic as it is - as angry and full of sorrow it made me - it's also incredibly beautiful. The writing style is just gorgeous, quietly enchanting, and it completely swept me away. But it's the story that had the most impact.

This is a fictional story inspired by true events; there was a storm that wiped out the majority of the male population, the women were left alone, and in 1620, women were murdered for being witches after Lensmann John Cunningham - Commissioner Absalom Cornet's boss - was sent over to take back control and rid the town of "evil". It's a story about a community changed by tragedy and grief. A community divided by self-rightousness, petty jealousies, and intolerance of the Sámi people. Where scandal and gossip fuel hatred, stoking it to a burning fire. Add to it a witch hunter commissioner, brimming over with anticipation to condemn, and it's not long before that hatred is the first flame that burns their neighours as they scream, "Witch!" before even being tied to the stake.

Before The Mercies, I'd only read non-fiction about witch trials. And it was heartbreaking, and overwhelming, and completely abhorent. But it doesn't really come close to the experience of reading a fictional story inspired by the true events. Getting to know numerous characters and getting to see a semblance of the real people in them, getting to learn what their lives were like - how they lived, what they suffered, how they survived. Getting to see the destruction from within as people turn against each other - for living differently, behaving differently, believing differently, for having what you don't and feel you should. Maren and Ursa are the two the narrators, and it's them that we know best, and while their romance is completely gorgeous and wonderfully slow-burning, it's also, for me, secondary to what is going on around them.

Kirsten, a born leader, who comes into her own when the men died, and takes charge and guides the women into learning how to fend for themselves - even though she is a woman. Toril, exceptionally religious and judgemental, who has nothing but disgust for anyone who acts "improper", or is Sámi. How Diinna and Maren's mother are both acutely changed by the deaths of the men in their family - Diinna withdrawing into herself, distancing herself from everyone, and failing to care for herself properly, and judged for how she cares for her son; Maren's mother bearing her grief as if it's still new even years after their deaths, and starting to harbour a deep, deep loathing for her Sámi daughter-in-law, and how she is dealing with her own grief. The divide in their community, and how it affects individuals. And what all of this means when the commissioner comes, and some have someone to go to with their prejudices. I became so emotionally invested in the lives of these women, those who were trying to survive and make something of their lives, figuring out how they can prevail without men. And so overwhelmingly devastated at the great injustice that led to.

The Mercies is an absolutely incredible story; it's gripping and beautiful, powerful and hardhitting, and absolutely heartbreaking. If this is a story you can read, I implore you to read it.

Thank you to Picador for the proof.

Have you read any retellings of witch trials/hunts, or stories inspired by them in general? What would you recommend? Have you read The Mercies? What did you think? If not, will you? Let me know in the comments!