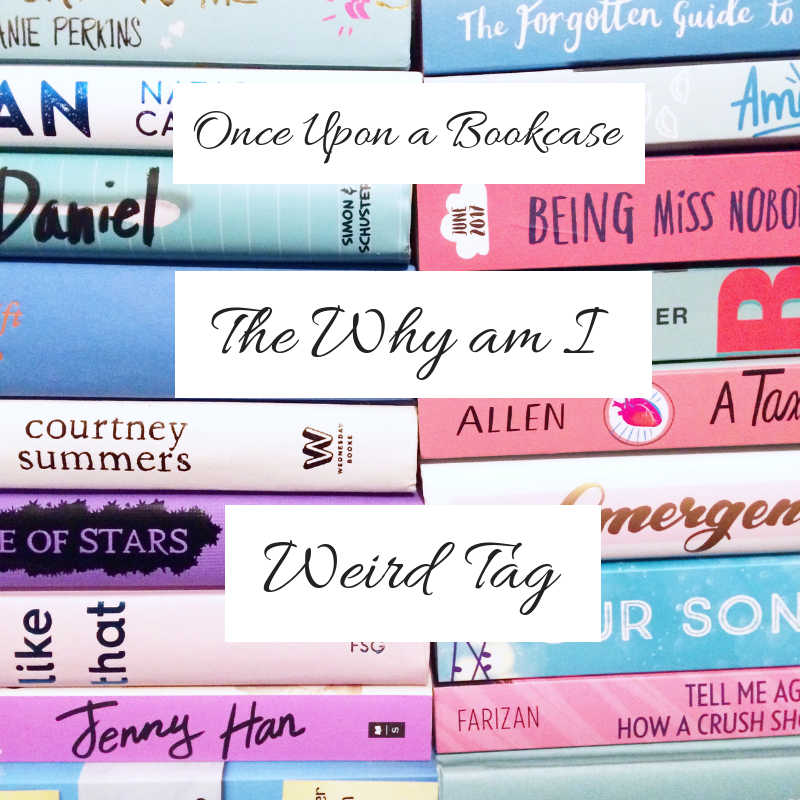 This post contains affiliate links.
Thanks to Delly of Delly Bird, I've been tagged in the blog tag she herself created - the Why I am Weird tag. The aim of this tag is to get to know the bloggers behind the blog a little better.

"Why I am Weird!" Tag rules

Before I start, I just want to preface this by saying that these aren't things about myself that I think are weird, necessarily, but that other people do/might. So some you might think aren't weird at all, but I've had that reaction before, so they've been listed! And also, these are things I wouldn't normally share on my book blog, because I don't really talk much about myself - not necessarily things I wouldn't share in general. Because I think I'm pretty boring overall, and making this list was hard! Ok, onwards!

1. I don't like dogs. I know that's quite controversial, but I have good reasons. When I was two, I was clawed by my aunt's Alsatian, and I remember it vividly. It's one of my most formative memories. For many years, I was terrified of dogs, but I'm not too bad now - as long as they're not huge, jump-upy, excitable dogs, because then I start to freak out. So at worst, I'm terrified, but at best I am completely indifferent to dogs. I honestly don't get it when people tweet and post on Facebook about their dogs. And I kind of feel like being clawed as a child has meant I'm now missing on out something, maybe? But I just don't care about dog's at all, really.

2. I'm knock-kneed, and because of this, I used to have a "party trick" where I would sit on the floor, bend my leg, grab my foot, and turn my leg until my foot was against my chest: 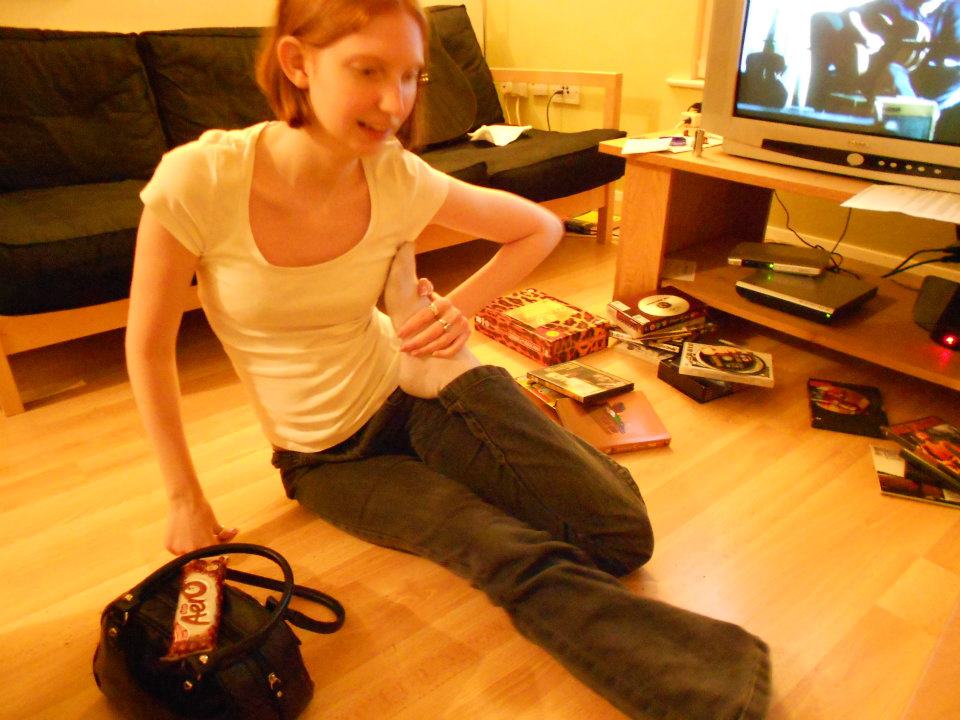 (Yes, I also used to be very skinny and underweight due to a fast metabolism. No skinny-shaming, please, I've had enough over the years.) I may or may not still be able to do this. I don't know. The last time I tried, I got really bad cramp, and so I've not tried again since. But all times before that were fine.

3. I believe in magic! I have a lot of childlike wonder over a lot of things, and I don't believe that just because things can be explained by science means it's not magic. Sunlight refracting through rain to create rainbows is magic. Tiny, little, unique snowflakes are magic. The aurora borealis is absolutely, most definitely magic. Humans are bloody magic! How our bodies work, how we heal! How sophisticated our brains are, in comparison to all other animals! I know we've screwed up the world with all our sophistication, and it's awful, but I just still think what we can do and what we've achieved is pretty amazing - we just might have gone too far. And, also, how it just takes one egg and one sperm for someone with a uterus to grow a tiny, little, new human. In nine months - nine! That's not that long in the great scheme of things. Mate there's so much magic in our world.

4. I kind of collect stamps and keyrings. I was more into it as a child than an adult, but I do love a cool keyring or a pretty stamp. I'm no stamp expert or anything, and I don't search out rare stamps. It's just if they're pretty or new, I'll keep them. Though I've been buggered since stamps became stickers rather than the kind you lick, as it's much more difficult now to get the stamps off the envelope. And keyrings! Whenever family went on holiday, they would always buy me a keyring as a souvenir. They don't know, but I will. I have two or three shoe boxes full, but I need to go through as a lot of them were freebies that came with magazines or from those egg-containing-toys vending machines, so there's a lot of crap in their. But I also have some really, really nice ones! Like one that can tell you, for a span of 200 years, I think, what day a particular date landed on. It's so cool!

5. I feel a deep affinity to the occult and all things esoteric and/or arcane. I don't necessarily believe in witchcraft, tarot, runes, astrology, or that dreams have meaning, but there's something about it all that I am deeply drawn to. Something about it just seems right, somehow. As in, for me, it seems - it feels - more believable than any well-known religion. Related, I went to a book launch for Everlasting, the final book in The Immortals series by Alyson Noel, many years ago and they had a tarot reader - one I had seen on TV. When I went to have a tarot reading, before she started, she said something about my aura having something physic about it (I can't remember her exact words now), and that I should get my own tarot deck. Which I did! But learning it all is really difficult, and apparently a lot of it is intuition based, but all my intuition was telling was that the cards I pulled were really pretty. But yeah, I have a number of different books on it all, and I just love learning more. 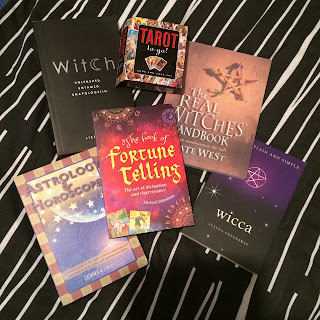 6. I've probably grown out of it by now, but when I was younger I had a heart murmur - every now and then the valves of my heart would get stuck. and my heard would skip a beat. I don't need no man or woman for my heart to skip, my heart skips (or skipped) at life!

7. Apart from my ceiling, door, and skirting board, my bedroom is black. The walls are black with silver splatters, I have black carpet, black curtains, and all my bedding is black along with white and/or grey. I love it! 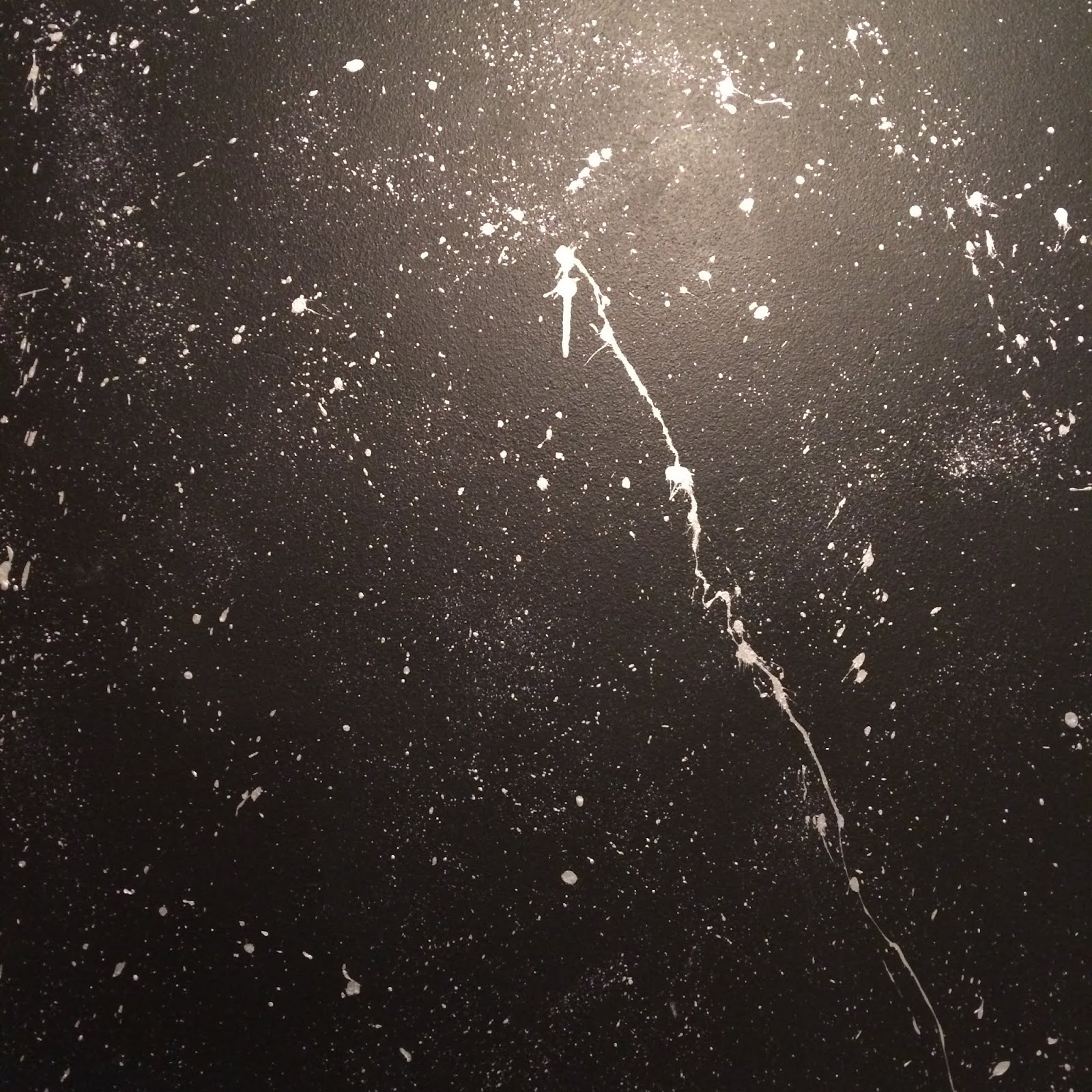 8. I'm really into old-school point-and-click adventure PC games! I love them! Monkey Island, Simon the Sorcerer, The Legend of Kyrandia, Discworld (yes, that Discworld!), Nostradamus: The Last Legacy, Black Mirror, The Book of Unwritten Tales, The Dark Eye: Chains of Satinav!And it's such a shame that not many are made any more. I'm not into computer games where you have to fight and kill things. That holds no interest for me. But the adventure games where you have to figure things out! Aah, I love them! 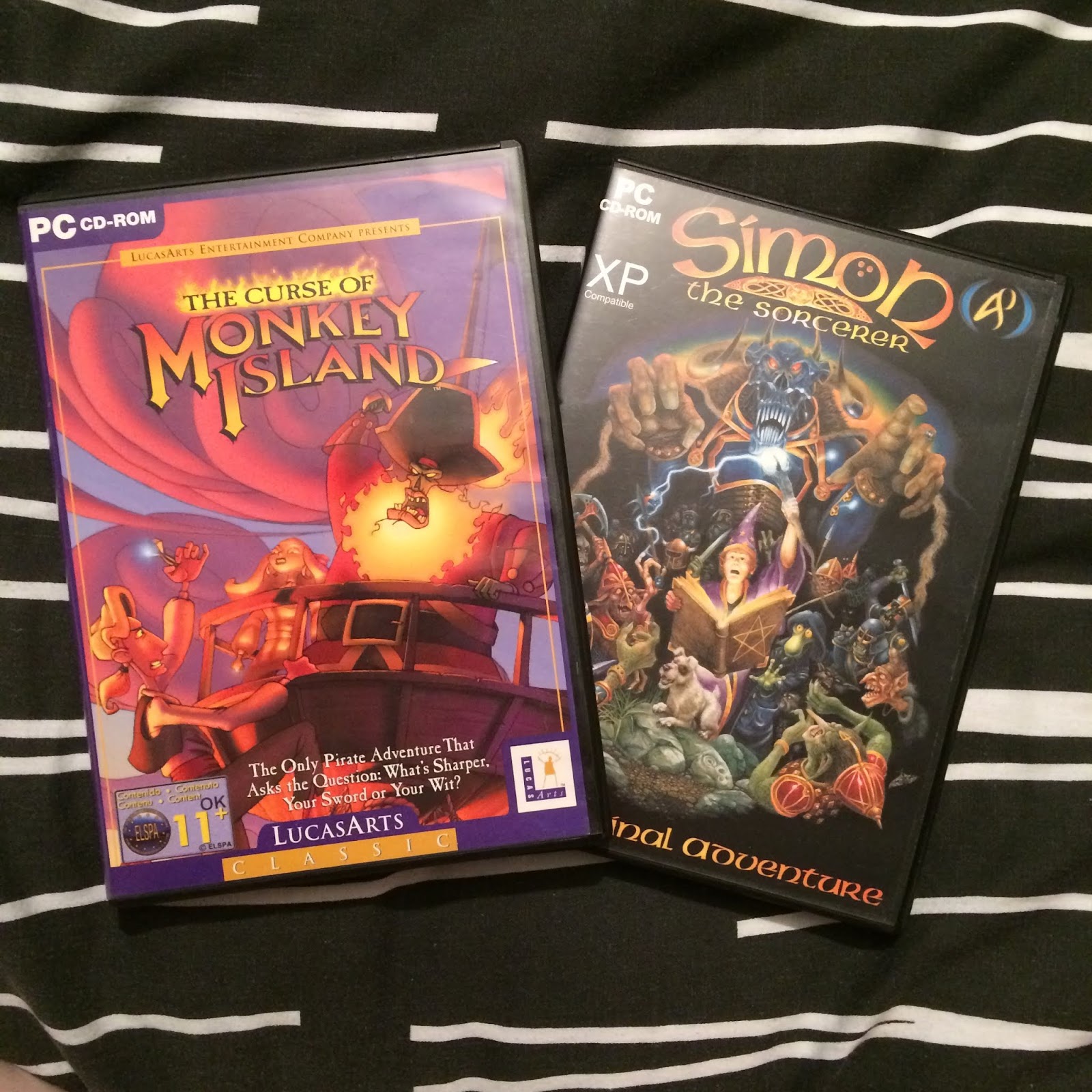 For my birthday, my brother bought me one that came out fairly recently, with the old-school pixelated design, Kathy Rain, about a college student who investigates the mysteries surrounding her grandfather's life after he dies. It starts off as just a detective-type story, but then becomes something creepy and sinister. It was so good! If you have any recommendations for good, classic point and clicks, do let me know!

9. I'm a massive musical fan! My love started when I was in my primary school's Drama Club, and we went to see Bugsy Malone before putting on our own performance, and I just loved it! I like seeing straight plays, too, but I do prefer musicals. I just find them to be much more emotional stories. I have seen: Bugsy Malone, Starlight Express, The King and I, My Fair Lady, Grease, Wicked (twice), Blood Brothers, Sunset Boulevard, Flash Dance, Love Story, Legally Blonde, Les Misérables, Chicago, Miss Saigon, Ghost,  The Phantom of the Opera, School of Rock, Young Frankenstein, Matilda, Come From Away, and I'll be seeing The Waitress in August!

10. I am an incredibly fussy eater. Incredibly fussy. I don't like pasta or rice. I don't like most sauces food is cooked in. For the most part, I don't like food to be cooked in herbs and spices. Just plain, please. I don't like most fruit or vegetables - I only like apples, grapes, tomatoes, cucumber and iceberg lettuce. I don't like cake, except for sugar ring doughnuts. I'm not really into sweets, but love chocolate, but only if it's plain milk chocolate with nothing else in it - unless it's an original Kitkat.  don't like eggs. I don't like cheese. I only like one specific brand of butter, and one specific brand of tea bags. And it bloody does my head in. I get so bored sometimes. And it's a nightmare when it comes to socialising, because I can't go to most places. I can't got for Chinese. I can't go for Indian. I can't go for pizza. A steakhouse or a Wetherspoon is safest. Or McDonald's. The most adventurous I go is a mild chicken curry from one specific Chinese takeaway, and then I only eat the chicken, nothing else that comes with it, or a chicken or beef fajita, but without the wrap. Both with chips. I am the biggest pain. 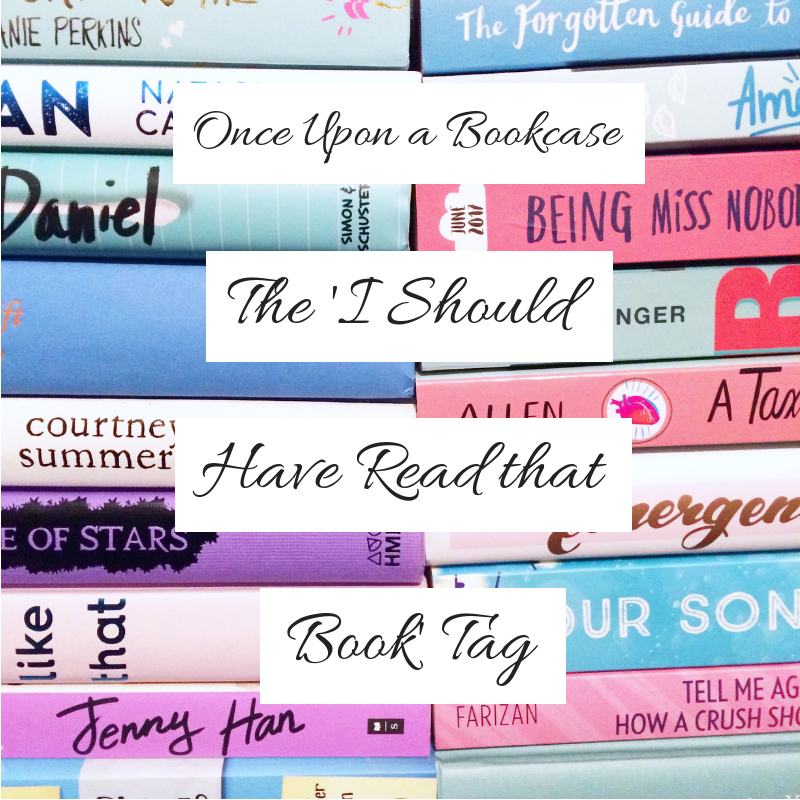 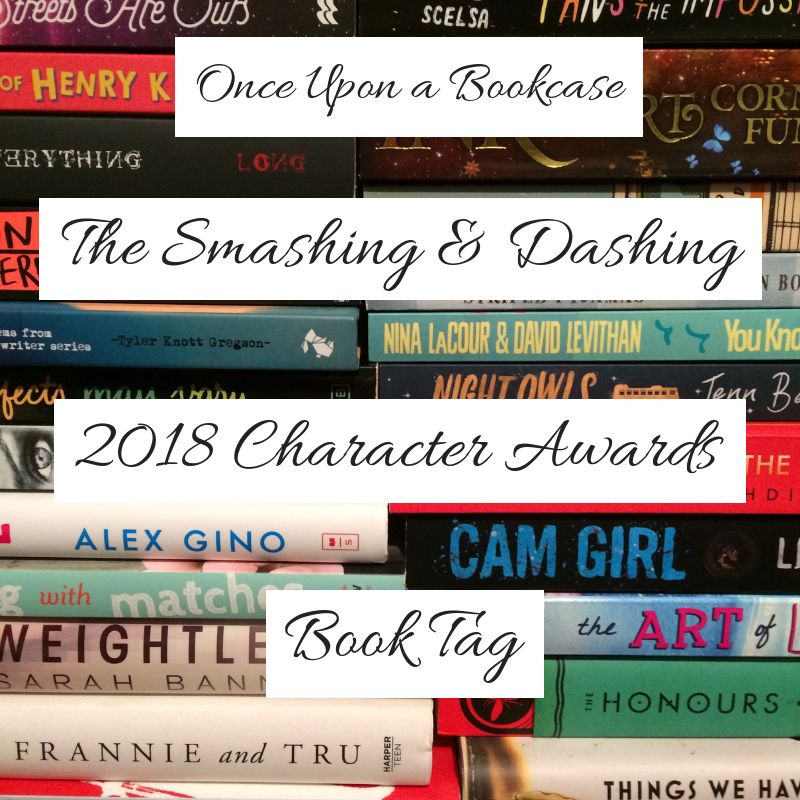 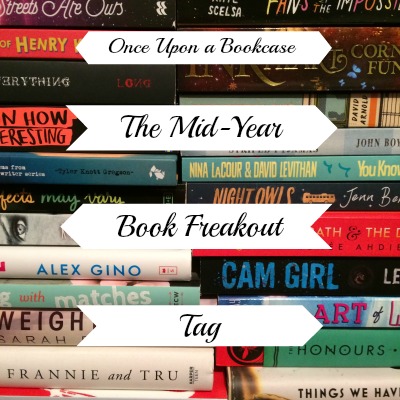 What are some weird things about you? Or things we may not know because your blog focuses more on books? Do you like musicals? How about point-and-click PC games? Have you ever had a tarot reading? Let me know in the comments!

Hampton Cannabis Expo Founder Gary Bi…
How To Help Your Husband Get On Board…
Postpartum Depression
10 Fastest Things in the Universe
Boity saved my life – Lerato Kganyago
--
If you enjoyed this post,
please consider buying the book using my affiliate links, and following / supporting me:
Bloglovin' | Twitter | Goodreads | Ko-Fi


This post first appeared on Once Upon A Bookcase, please read the originial post: here
People also like
Hampton Cannabis Expo Founder Gary Bierfriend On Conference's 5th New York Season
How To Help Your Husband Get On Board With Prepping – Part 2
Postpartum Depression
10 Fastest Things in the Universe
Boity saved my life – Lerato Kganyago