Today, I'm really excited to have Christina June stopping by the blog to discuss her Hansel & Gretel retelling, No Place Like Here. 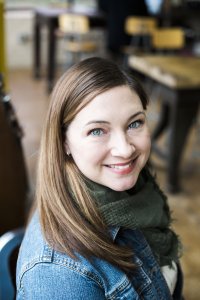 Can you tell us a little about No Place Like Here? What kind of a retelling of Hansel & Gretel is it?

NO PLACE LIKE HERE is what I’d call a contemporary novel inspired by Hansel & Gretl. While it’s not a strict retelling, readers will be able to recognize many of the familiar elements of the story transformed in clever ways. My books are also companions, so while they can certainly be read as stand-alones, it’s also fun to read them all and see how favorites pop back up.

My main character, Ashlyn, has just returned home from a year at boarding school only to learn her uber-critical father is going to jail, her mother is going to rehab for depression, and she’s being sent to work with her estranged cousin at a wilderness retreat center. Ash is an indoor kind of girl, and she’s never had a job, so she’s really out of her element and totally without a support network. Despite those obstacles, Ash begins to evolve over the summer and becomes more confident in her ability to survive and to get back home.

Why Hansel & Gretel? What drew you to this fairy tale? And what inspired you to retell it?

If you boil Hansel & Gretl down to its core, it's an abandonment story where two kids fight their way home to the father they love.  Despite his mistakes, they find value in him and want to be with him.  I'd already established Ashlyn's father as a cruel man whose behaviors negatively impacted his daughter in the few glimpses readers get of him in my first book, IT STARTED WITH GOODBYE, so it was easy to expand upon their relationship and dig deeper into why Ashlyn is the way she is in her own story. She has learned over her lifetime that speaking up against her father is rarely successful, so she stops, biding her time until she can escape the house.  But, when circumstances force her to learn to be more independent, Ash realizes there are times when using her voice is imperative and sees how she has the power to change the relationship with her father.  In my day job as a school counsellor, I see similar situations with students and their families; those emotions and inner conflicts influenced this story quite a bit.

What do you bring to the Hansel & Gretel story with No Place Like Here?

Something I love about my take on the story is the uniqueness of the villain. In the original, the witch is this completely evil being who lures in children and eats them. When I settled on telling this story at a retreat center, which is basically summer camp for adults, I interviewed experts who have worked at these places and they said the most dangerous trait someone in charge can have is carelessness. So I built my “witch” around that idea. I also like that my Hansel & Gretl characters are cousins who don’t know each other very well, so they have to learn to get along in order to fix the problems they encounter.

How does No Place Like Here differ from other retellings of Hansel & Gretel out there?

Honestly, I’ve never read another one! That was partially what drew me to take on this fairy tale; I knew it would be different. I think my fairy tale-inspired stories differ from others in general because they’re contemporary. They’re set in the modern world and there is no magic. Most other retellings I’ve read are fantasy or science fiction. 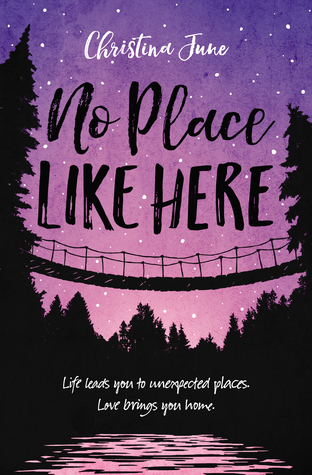 I think the difficulty is that readers know the source material, sometimes extremely well. There are versions of the same stories in so many cultures around the world, so if you take on something so beloved, you have to be prepared for critics. The plus to using something established is the fun of making it your own and finding ways to twist the familiar into something entirely new. A lot of fairy tales are made up of tropes we might find dated, so swapping endings, genders, power sources, etc. can really freshen them up.

What do you hope readers get from No Place Like Here?

My hope is that readers might see how much power they really do have in their own lives and be inspired to stand up for themselves where they previously felt they could not.

The best retellings, for me, are the ones that show me something new about the original story. We are drawn to fairy tales, myths, and classics because the emotions behind the stories are timeless and make us feel. A retelling should examine not only the characters and plot points, but the themes. The author can make the reader feel the same things as the original, but in new ways.

Are there any retellings you would recommend, either of Hansel & Gretel, or in general?

Some of my favorites include the A Court of Thorns and Roses series by Sarah J. Maas [Beauty and the Beast] and the The Wrath and the Dawn duology by Renee Ahdieh [A Thousand and One Nights]. I also like books that offer fresh takes on classic literature, like Great by Sara Benincasa [The Great Gatsby] and Seeking Mansfield by Kate Watson [Mansfield Park].

If you're near northern Virginia on Sunday June 2, please stop by One More Page in Arlington for my launch party celebrating NO PLACE LIKE HERE! I'm also running a preorder campaign with several great digital thank you gifts, so please snag yourself a copy at your favorite bookstore or retailer and hang on to the receipt. Check my social media channels for forthcoming details.

Thank you, Christina, for such great answers! I really love the idea of real contemporary retellings without any magic, and I didn't realise Christina's other stories were also fairy tale retellings, and were companion novels! As well as It Started With Goodbye, there's also Everywhere You Want to Be. So three retellings to read! Exciting!

Ashlyn Zanotti has big plans for the summer. She’s just spent a year at boarding school and can’t wait to get home. But when Ashlyn’s father is arrested for tax evasion and her mother enters a rehab facility for “exhaustion,” a.k.a. depression, her life is turned upside down.

The cherry on top? Ashlyn’s father sends her to work with a cousin she doesn’t even know at a rustic team-building retreat center in the middle of nowhere. A self-proclaimed “indoor girl,” not even Ash’s habit of leaving breadcrumb quotes—inspirational sayings she scribbles everywhere—can help her cope.

With a dangerously careless camp manager doling out grunt work, an overbearing father trying to control her even from prison, and more than a little boy drama to struggle with, the summer is full of challenges. And Ashlyn must make the toughest decision of her life: keep quiet and follow her dad’s marching orders, or find the courage to finally stand up to her father to have any hope of finding her way back home. From Goodreads.

Relais & Châteaux Weeshuis Gouda
10 of the best rural glamping hideawa…
Dead Ends in Cryptanalysis #2: Timing…
10 Simple Tricks for an Easy Garden M…
The Important Details About An Evicti…
--
If you enjoyed this post,
please consider buying the book using my affiliate links, and following / supporting me:
Bloglovin' | Twitter | Goodreads | Ko-Fi


This post first appeared on Once Upon A Bookcase, please read the originial post: here
People also like
Relais & Châteaux Weeshuis Gouda
10 of the best rural glamping hideaways in Britain
Dead Ends in Cryptanalysis #2: Timing Side-Channels
10 Simple Tricks for an Easy Garden Makeover – Gardening Week 2021
The Important Details About An Eviction You Should Know More About
Microalgae can be a potential feed for aquaculture species
Music Profile: Crissi Cochrane - Soul Singer Songwriter - Ontario, Canada | SRL Networks London Music PR
“The Friend Who May Not Seem a Friend” – The Cat and the Fire, Post 2 of 3