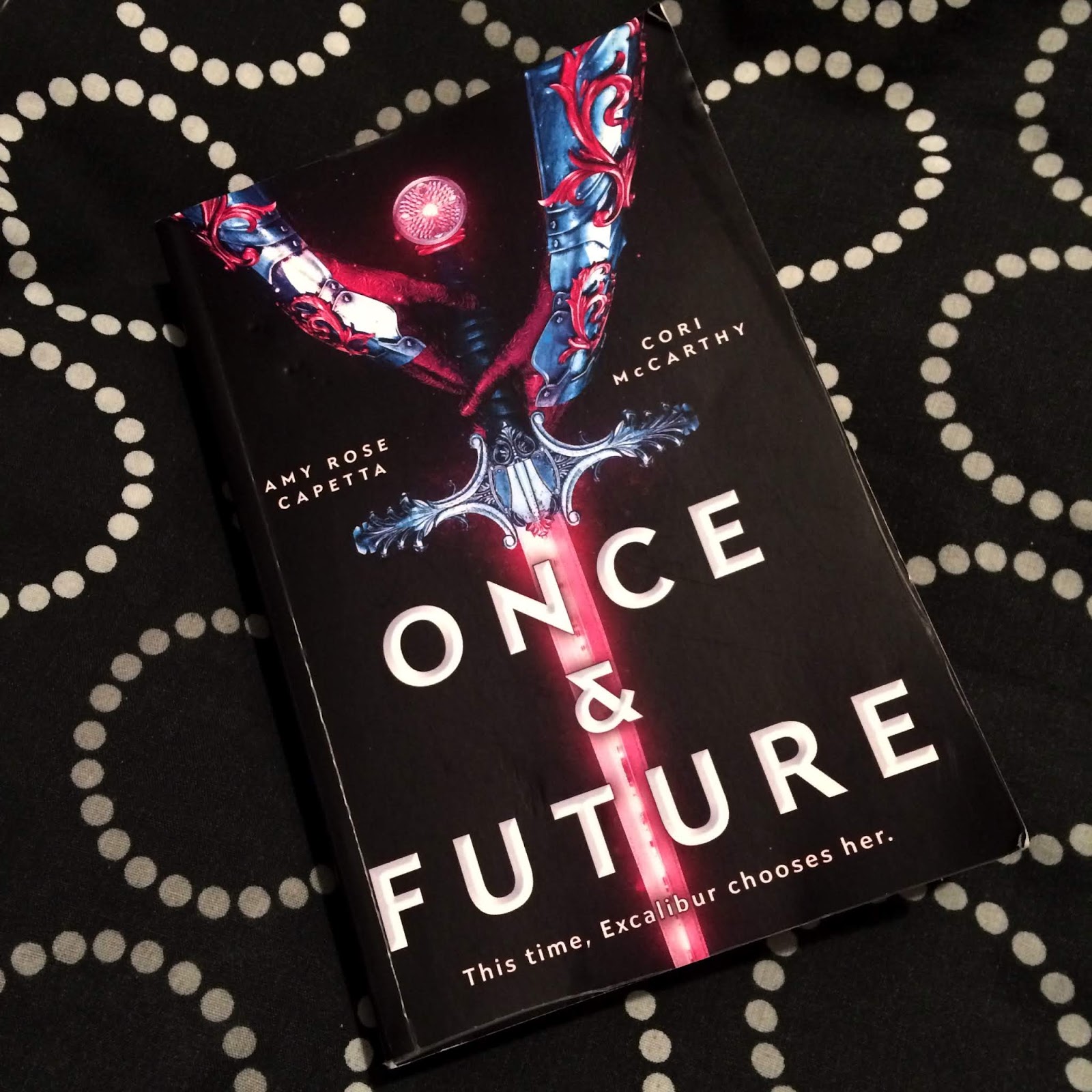 I’ve been chased my whole life. As a fugitive refugee in the territory controlled by the tyrannical Mercer corporation, I’ve always had to hide who I am. Until I found Excalibur.

My name is Ari Helix. I have a magic sword, a cranky wizard, and a revolution to start.

When Ari crash-lands on Old Earth and pulls a magic sword from its ancient resting place, she is revealed to be the newest reincarnation of King Arthur. Then she meets Merlin, who has aged backward over the centuries into a teenager, and together they must break the curse that keeps Arthur coming back. Their quest? Defeat the cruel, oppressive government and bring peace and equality to all humankind.

No pressure. From Goodreads.

I was sent this proof for free by Rock the Boat for the purposes of providing an honest review.
Trigger Warning: This book features genocide and murder.

Ari is an illegal immigrant from Ketch, a planet that Mercer - the tyrannical corporation that controls everything - shut the planet off for dissidence and speaking up against Mercer. She was found when she was seven-years-old by Kay and his mums, and she has been hiding with Kay ever since. But when she accidentally alerts Mercer to her location, she and Kay have to run pronto, and end up on Old Earth, the retired planet humans left, a planet that is respected and to remain untouched, but they discover is actually being destroyed by Mercer. While there, Ari pulls a sword out of a tree - Excaliber. Doing so wakes up Merlin, who seeks Ari out as they try to hide from Mercer. He throws a spanner in the works when he tells her that she is the 42nd reincarnation of King Arthur, and it is her duty to defeat the greatest evil in the world.

A lot of my issues with the book are down to my personal taste, and Once & Future just wasn't it, unfortunately. It's meant to be quite comedic, with humour woven in throughout. I just didn't find any of it funny; rolled my eyes too many times to count, and in the end I actually found it all really annoying. My other issue is that everything happened and was over so quickly, that until maybe the last third of the book, it felt like nothing much was really happening. It moved so quickly; too quickly for me personally to form emotional attachments to the characters.

There's not much in the way of development in Ari and Gwen's romance, because it's a continuation of a romance that started before the book began, albeit years ago in the book's time line. Plus there's the fact that everyone accepts Merlin and what he tells them regarding Ari being King Arthur, and everyone she knows being her knights, the whole "save the universe" malarkey far too quickly. There's very little in the way of disbelief, denial, doubt, questioning, or, "Why me/her?"

And then there's the fact that I couldn't stand Merlin, which is a problem considering Once & Future is told from both his and Ari's perspectives. Merlin is the character I was most excited to meet. Merlin is meant to be this venerable, wise wizard (he prefers magician, but magicians pull rabbits out of hats, so wizard it is) and he's anything but. All I know about the King Arthur legend is from Disney's Sword in the Stone and the TV show Merlin, so I didn't know about Merlin's backwards ageing. But even so, he was once an old man, wise and smart, I don't see why his body now being that of a teenager would have an effect on who he is. He would still have all his life experience, he would still be smart and wise. But instead, we get an awkward, gawky, easily embarrassed idiot for an excuse of a wizard. Mate, Merlin simply wouldn't make the mistakes that he does. At times, he's more trouble than he's worth, really. And to be honest, other than the occasional bought of magic that saves everyone's skin, he doesn't really do much. He's meant to train the latest Arthur and prepare them for their role, and he keeps going on about it, but he doesn't really do any of it. He was such a massive disappointment. Merlin has his own romance with Val, Ari's best friend, but even that left a lot to be desired. You have Val being all smooth and cringey, and Merlin blushing all over the place, and practically falling off his chair because Val's hand brushed his. It was exasperating.

The only character I really liked was the character I loved to hate; the Administrator of the Mercer Corporation. Mate, he was so sinister! He was cruel, and seemed to delight in hurting and breaking others, but acted friendly and jovial, and he was so messed up - I loved it! I do wish we had more of him on page, or got to see him act upon his threats a little more. And Mercer, the corporation itself, was just brilliant. A corporation that holds the monopoly on everything you could possibly need to survive - food, water, oxygen, etc. - and also everything you could possibly want, who withholds everything from you, if you don't do what they want. It was pretty genius, really. But yeah, the Administrator and Mercer were all that brought about reactions from me that I would expect.

A massive plus for Once & Future is how diverse it is. Lam identifies as fluid, and uses they/them pronouns. They and their brother, Val, have dark brown skin, and Lam also has dreadlocks. Ari is from Ketch, whose people Merlin surmises are descended from Arabs on Old Earth, because the language Ketchan is Arabic. Gwen is of mixed Asian and European heritage, also noted by Merlin. There are very few labels given in regards to sexuality, as the universe seems to be one where labels aren't needed, but there are a lot of queer people in this book.Val and Merlin are attracted to men, Gwen is attracted to men and women, and Ari is with Gwen, but had a crush on Lam, and Kay and Ari were brought up by their two mums. Lam and Kay are attracted to women; they may also be attracted to other genders, but we don't see that in this book. There is also a character who is asexual - "ace" on page - and I assume, from what they say, also aromantic, but I'm not saying who, because it would spoil a specific element of the King Arthur legend in this retelling. But Once & Future is so diverse, and it's wonderful!

Obviously, Once & Future wasn't for me, sadly, but it a number of people have really enjoyed it, so do read some other reviews before deciding whether or not to read it.

Thank you to Rock the Boat for the proof.

Wielki sukces naszej firmy
First Night of the Seven (7) Nights o…
how to remove dark circles in 2 days
MRS THATCHER’S DREAM
Multi Level Marketing And How It Work…
--
If you enjoyed this review,
please consider buying the book using my affiliate links, and following / supporting me:
Bloglovin' | Twitter | Goodreads | Ko-Fi