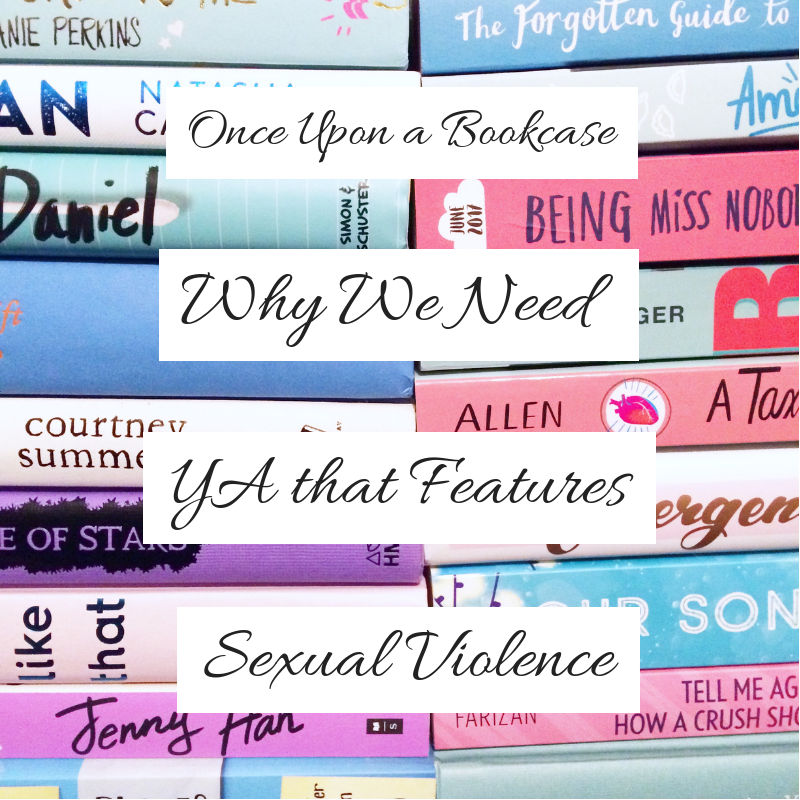 At the beginning of the year, author of Girls of Paper and Fire, Natasha Ngan, wrote a thread on Twitter on parents saying that sexual abuse and abusive relationships are inappropriate content for teens. Her thread is really important, and I urge you to read it, but I wanted to give my thoughts on this, too.

I can't tell you how important it is for us to have YA books that deal with sexual violence in all it's forms. It should never be used as a plot point, but we need them. As Ngan points out, books that feature sexual violence are not for everyone, possibly they'll be triggering, or maybe it's just not something the reader is comfortable with reading. And that's absolutely fine. But there will be those who do need these books. Those who have experienced things they never should have. Those who are experiencing things right now. Those who are suffering, surviving, and need to know they're not alone, that they have nothing to be ashamed of, that there is help out there. Those who need to understand that these things happen, and not just down an alley by a stranger. Those who don't yet understand boundaries and consent, or what is even considered sexual assault. Teens are seriously clever, and if they are not ready for these kinds of books, they will avoid them. But you can't give a blanket no on these books when there are teens who need them. I needed them.

When I was 11 years old, I was followed home from school and sexually assaulted. I won't go into the details, but it was the most terrifying thing I have ever experienced - and that fear never really went away. I'm doing ok now, but as a teen, I was deeply affected by what happened, for years. I didn't leave the house on my own unless it was to go to school, go to my Nan's, whose house I could see from my own, literally five minutes away, or go to the shops for my parents - their way of trying to get me out of the house (I want to point out here that I was a very shy child, and my parents didn't realise just how scared I was, they thought it was my shyness. I have had conversations with my mum as an adult which upset her, because she didn't know how I felt back then). Otherwise, I went with an adult. I never had a boyfriend, because boys can hurt you. I didn't have a social life at all until my late teens really. I spent years living in fear of what happened could happen again - or worse.

I didn't have books like we have now then. To be honest, if we did, I probably wouldn't have read most of them. I was a huge high fantasy fan, and pretty much all of them were adult. Only a few featured sexual violence of any kind, but there was never any focus on how the character felt and struggled, it was more about enduring until they didn't have to any more. Had it been available then, Girls of Paper and Fire is a book I probably would have picked up. It would have been the first book I read that looked at sexual violence where I would have felt less alone, where I could have seen there is help available, where I could have got that help. But it wasn't available then. Nor were any of the other books I've read since. The first time I read a book where I actually felt seen was when I was in my 20s. That is a long time to wait. These books helped me as an adult, but if there were more books like these available when I was a teenager, my life could have been so different.

These books are important. They are powerful, and so very much needed. They can make all the difference. Don't keep these books from teens because it's not what you want them to read. You're not protecting them; the world is a scary place, and they'll already know that. These books could help them deal with that.

Here is a list of, YA novels that deals with sexual violence (covers go to the book's Goodreads page):

What are your thoughts on YA novels that deal with sexual violence? Are you for or against? Do you have any more recommendations to add to the list? Let me know in the comments!

5 Practical Tips on How to Use Social…
How To Make Sex Better In Long-Term R…
Step-by-Step Guide on Creating the Ul…
“BUY Sqribble? My Honest Review!
Top 12 Best Manga Websites Like Manga…
--
If you enjoyed this post,
please consider buying the book using my affiliate links, and following / supporting me:
Bloglovin' | Twitter | Goodreads | Ko-Fi