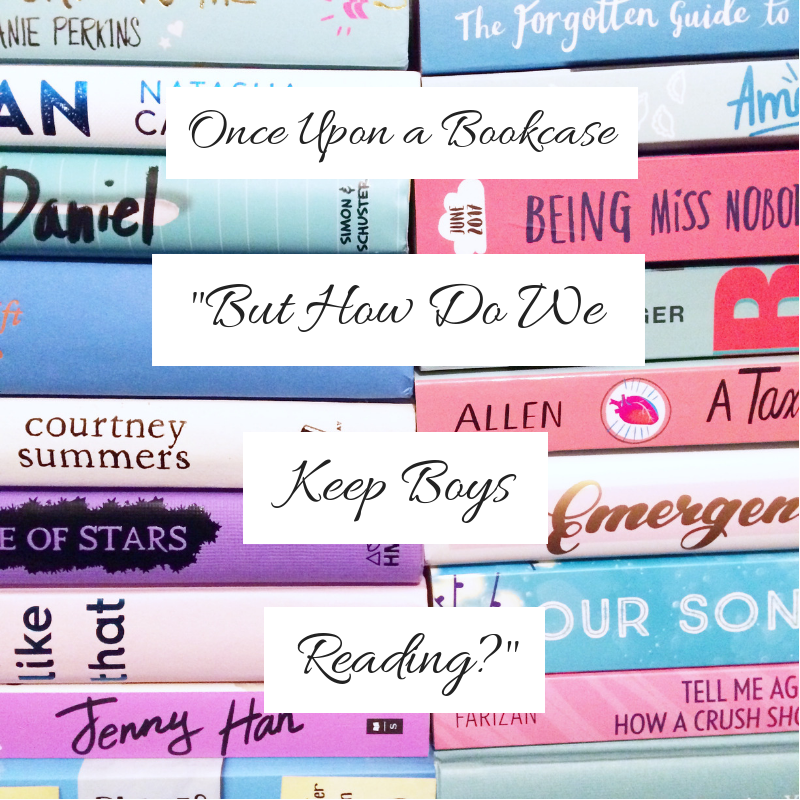 This post contains affiliate links.
Today's post is going to be slightly different. Once Upon a Bookcase is primarily a YA Book blog, but I want to talk about younger books, though this relates to YA as well. And I'm coming at this in part with my blogger hat on, but also with my children's bookseller hat on.

On Monday 28th Jan, Anne Ursu tweeted a stack of finished copies of her next release The Lost Girl, to share her excitement. The very next day, another author, Will Weaver quote tweeted Ursu saying, "Excellent. But how do we keep boys reading?" When Ursu replied "Pardon me?", Weaver responded how boy readers lag behind girl readers, "what can we do to close the gap? Here's what I've done," including a photo of a stack of his books aimed at boys - co-opting Ursu's moment of excitement to promote his own books.

Now this is offensive on so many levels. Let's break them down, shall we? It's offensive to:

Basically, what he's saying is boys are more important than girls, we should be thinking about and centering the boys, but oh my god, doesn't society do that enough already? Doesn't society already imply girls aren't good enough, through inequality and the sexism?

It might sound like I've gone off on a tangent, but I've not. These boys will grow up to be men, ad will live in a society that tells them they're worth more than women. And you're just feeding them that as children when you tell them they should only read books about boys, or boys books are better than girls books, or you wouldn't like that, it's about a girl, implying boys can't relate to girls, boys can't empathise with girls, girls are some alien creature that is completely separate and different to them.

As a bookseller, I can't tell you the number of times I've had parents say, when asking for recommendations for their son, "He won't read that, it's about a girl." The number of times I have tried to hand-sell The Girl From Everywhere by Heidi Heilig, because, going by the kind of books the boy in question likes to read, it would be right up their street, but the parent sees "girl" in the title, sees a girl's face on the cover, reads in the blurb that it has a girl protagonist, and they put it back, because, "He won't read that." Have they actually asked their sons? Most of the time, the sons aren't there, and it's the parents deciding what they will read. They are instilling the idea that they shouldn't read about girls by only buying them books with boys in them. Have they actually tried getting their sons to read books with girls?

These views are harmful. Authors, parents, teachers, librarians should not be implying boys need books with male protagonists - boys just need books, like girls need books. They're just books, not boy books or girl books. Just books. And considering the society that we live in, giving boys books with female protagonists will show them that girls aren't really that different. That they're just as smart or funny or brave or worthy. That they can have adventures, and want to do exciting things. These books can help boys grow up thinking of girls and women as equal to boys and men.

I want to end this post with two anecdotes from work. One is of a father coming into the shop with his son, who is about four years old, and asks him what he wants to look at. The son says, "Sticker Dolly Dressing!" and the dad immediately takes him over to those sticker books, and together they browse through these "girlie" sticker books together, like it's perfectly normal - because it is perfectly normal.

Another is an exchange between a mother and a son.

A good book is a good book, no matter the gender of the protagonist.

How do we keep boys reading? Give them a good book.

Please share your thoughts with me on Weaver's ridiculous comment. What do you think of boys reading books with girls? If you're a parent/guardian, or someone who buys books for children, what has been your experience surrounding boys and the books they read? Let me know all your thoughts in the comments!

How To Overcome Nightmares and Sleep …
When You and Your Best Friend Had an …
Spider-Man: If This Be My Destiny - L…
5 Practical Tips on How to Use Social…
Step-by-Step Guide on Creating the Ul…
--
If you enjoyed this post, please feel free to follow/support me:
Bloglovin' | Twitter | Goodreads | Ko-Fi