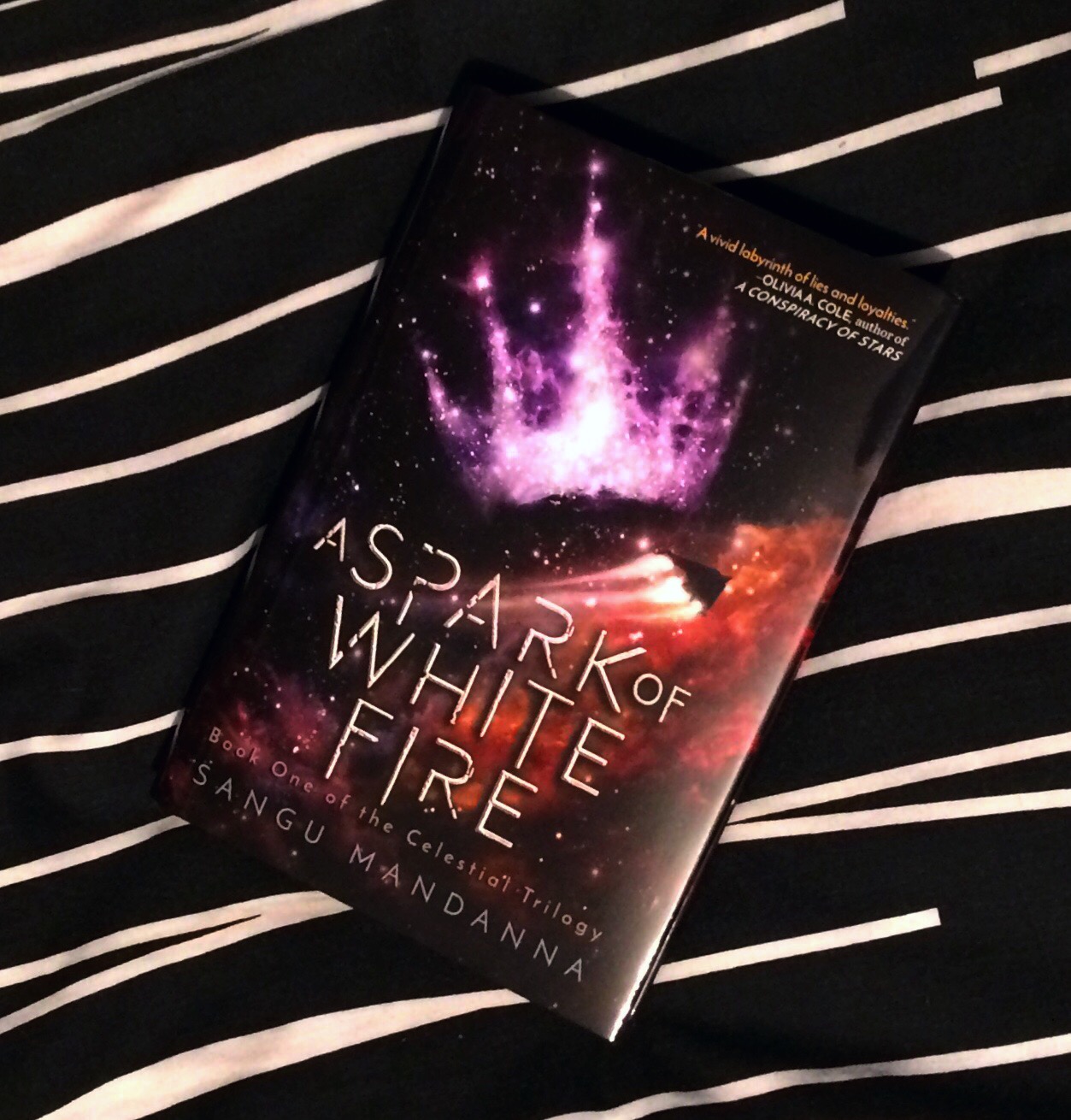 A Spark of White Fire by Sangu Mandanna (Bought)

In a universe of capricious gods, dark moons, and kingdoms built on the backs of spaceships, a cursed queen sends her infant daughter away, a jealous uncle steals the throne of Kali from his nephew, and an exiled prince vows to take his crown back.

Raised alone and far away from her home on Kali, Esmae longs to return to her family. When the King of Wychstar offers to gift the unbeatable, sentient warship Titania to a warrior that can win his competition, she sees her way home: she’ll enter the competition, reveal her true identity to the world, and help her famous brother win back the crown of Kali.

It’s a great plan. Until it falls apart.

Inspired by the Mahabharata and other ancient Indian stories, A Spark of White Fire is a lush, sweeping space opera about family, curses, and the endless battle between jealousy and love. From Goodreads.

A Spark of White Fire by Sangu Mandanna is a book I've been excited to read since I first heard of it. An #OwnVoices retelling of the Indian epic, the Mahabharata, with complicated family drama, set on kingdoms on ships? Who can resist that?! And it was a very quick, enjoyable read!

Esmae is the forgotten daughter of the former queen of Kali. Sent away moments after her birth due to a curse, Esmae has lived the past 17 years in a foster home. Beloved by the gods, she's not been complete alone; Amba, goddess of war, has taken a shine to her, and visits her regularly. It's because of her she knows who she really is. The twin sister of the exiled Prince Alexi, who had his kingdom taken from him by their jealous uncle. Desperate to rejoin her family, and to see her brother back on his throne, Esmae enters the King of Wychstar's competition to win the indestructible, sentient warship Titania. With Titania, she can reveal who she is, and can help her brother retake his throne. But things aren't quite as black and white as they seem, and the gods have seen a vision of the future; when Esmae enters the competition, she becomes a spark that ignites a fire that burn the world to the ground.

I have to be honest and I was a little put off by the fact that A Spark of White Fire is set in space because, for the most part, I do not like books set in space. It's one of the things that will really put me off a book. However, A Spark of White Fire is sci-fi light; yes, it's set in space, on kingdoms on the back of spaceships, but once on those kingdoms, the story becomes more high fantasy than sci-fi. The world building is fantastic; whole kingdoms on the backs of humongous space ships. Gods who actually make themselves known, who take sides and have visions of the future, who help where they can, but are restricted from actively getting involved because they would become mortal. They have their own myths and legends - ones that are actually true. It's a fully rounded universe that is wonderful to get lost in.

The story itself is full of intrigue and politics that had me hook, line and sinker, with such complicated family dynamics. When Esmae wins the Titania, she decides to return to Kali, her brother's kingdom, and pretend to be on the side of King Elvar, their uncle. There, she can find out her uncle's plans and his weak points, and tell Alexi. She hates him and his son, Prince Max, for what they did to her brother four years ago, when her father died, and stole the throne from him. But things are a lot more complicated than she realises. And these people aren't the bad guys she's expected. King Elvar and Queen Guinne, along with Prince Max, welcome her with open arms, and are genuinely fond of her. She has family for once, she belongs. And it's not quite so simple as King Elvar stealing the throne from her brother - there's history she doesn't know about. But King Elvar is a very frightened and anxious king, and with Lord Selwyn - Queen Guinne's scheming brother who has ambitions of his own - whispering in the king's ear, he is terrified of what Alexi might do, and is always on the verge of committing terrible atrocities. It's only Prince Max who seems to be able to reason with his father - a father who keeps unintentionally reminding him that he's not actually his son, but adopted; isn't his blood and isn't a Rey, so isn't quite good enough.

A Spark of White Fire is a very quick read; it's just over 300 pages, but the font is quite big, so I flew through it. And though important things happen, especially at the end, it felt more like a book to set things up; to get to know the characters, the relationships, the histories, all the family drama, and for certain moves to be made that will lead to the second book where things will really get going. I didn't mind this so much, as I really liked the characters. However, because it's such a quick read, there were elements I felt were underdeveloped. As I've said, a number of important things happen, but they're so brief, it almost feels like, on the whole, nothing much does happen. All of these smaller, important things were needed for thatending, but I just wish they were longer - battles, moments of danger, plots and schemes, I wish they were all described in more depth.

But it was still a really enjoyable read, and that ending was explosive! It turned everything on it's head! This whole book was written for that specific ending, so things can really get moving in the second book. However, I do not understand the reasoning that led to that ending. It's not a plot or writing problem, I just don't understand the actions of a specific character. From what we've seen, it's just so out of character. I just don't get it. I kind of want a short story from the perspective of this character of the last few chapters, to understand why. But, well, with gods and their visions, does the why really matter? Yes, things are in flux, actions and choices made by certain people can lead to other possible futures, but those fixed points, eh? You can't avoid them. They are what they are.

When You and Your Best Friend Had an …
5 Practical Tips on How to Use Social…
Step-by-Step Guide on Creating the Ul…
“BUY Sqribble? My Honest Review!
Top 12 Best Manga Websites Like Manga…
--
If you enjoyed this post, feel free to follow me on:
Bloglovin' | Twitter | Goodreads