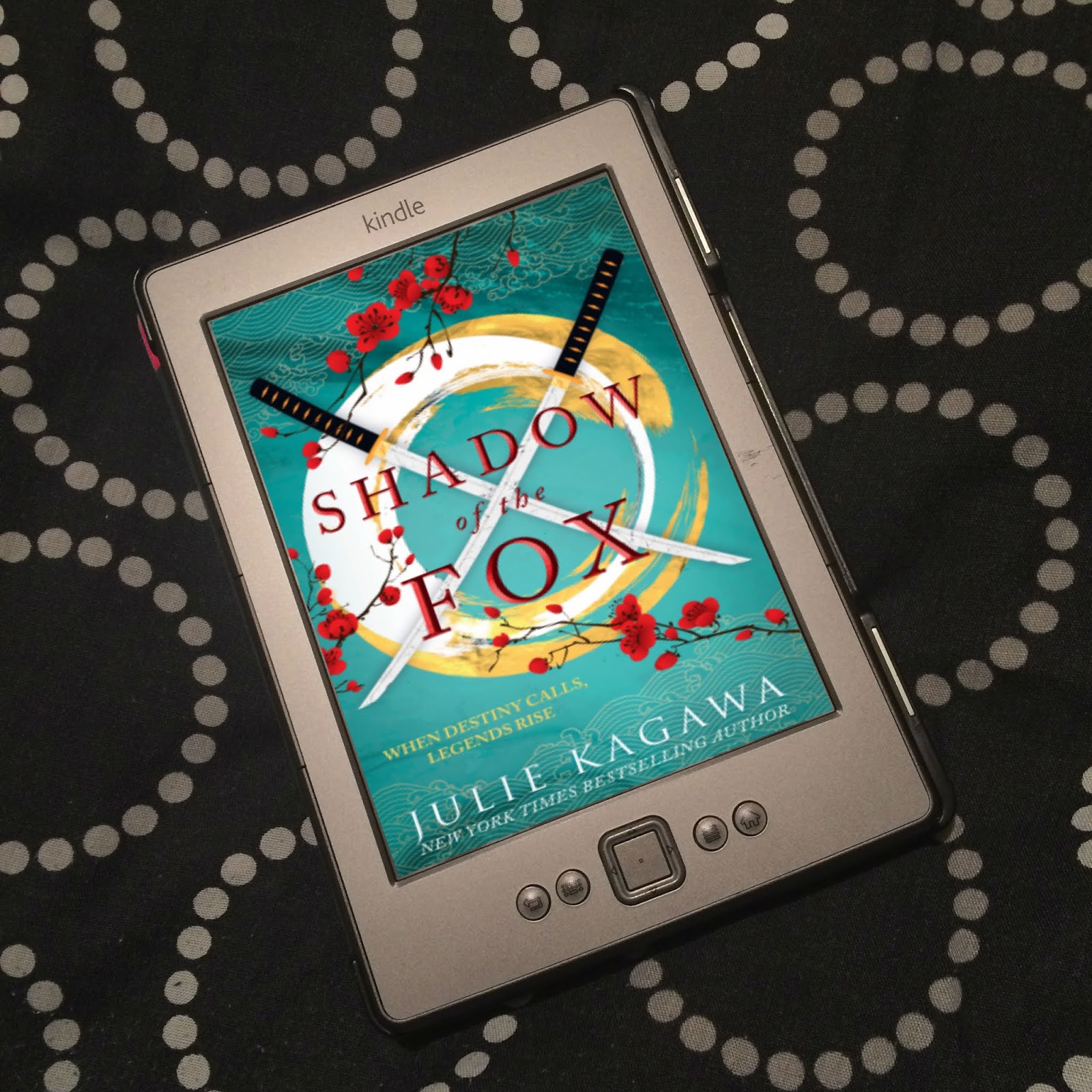 Shadow of the Fox by Julie Kagawa

A single wish will spark a new dawn. Every millennium, one age ends and another age dawns...and whoever holds the Scroll of a Thousand Prayers holds the power to call the great Kami Dragon from the sea and ask for any one wish. The time is near and the missing pieces of the scroll will be sought throughout the land of Iwagoto. The holder of the first piece is a humble, unknown peasant girl with a dangerous secret. Demons have burned the temple Yumeko was raised in to the ground, killing everyone within, including the master who trained her to both use and hide her kitsune powers. Yumeko escapes with the temple's greatest treasure - one part of the ancient scroll. Fate thrusts her into the path of a mysterious samurai, Kage Tatsumi of the Shadow Clan. Yumeko knows he seeks what she has and is under orders to kill anything and anyone who stands between him and the scroll. From Goodreads.

I loved the sound of Shadow of the Fox by Julie Kagawa when I first heard about it, but was a little wary as I hadn't enjoyed the other book by Kagawa I'd read in the past. However, Shadow of the Fox was a really facinating story, and one I thoroughly enjoyed!

Yumeko is half human, half Kitsune - a fox yōkai. She was abandoned on the doorstep of the Silent Winds Temple as a baby, and has been raised by months ever since. A natural mischievous prankster, she's spent the years being a nuisance to some of the less patient monks, doing chores, and learning from Master Isao about her magic and how to keep it hidden. But the turn of the new millenium is almost at hand, and Master Isao reveals to Yumeko the true purpose of the Silent Winds Temple; to keep a piece of an ancient scroll safe. It's a piece from the Scroll of a Thousand Prayer, and whoever has all the pieces will be able to call the Kami Dragon from his watery home at the turn of the millenium, and have one wish granted. When a horde of demons appear at the temple one evening, Master Isao forces Yumeko to run with the scroll piece with the instructions to seek out a Master Jiro at the Hayate shrine in Kin Heigen Toshi, the capital city if Iwagoto, and find out from him the secret location of the Steel Feather temple. It's the only place the scroll piece will be safe. The demons raze the temple to the ground, killing everyone in it, but not before the monks combine their forces together to hold the demons at bay in order for Yumeko to get away. But when she is discovered by some minor demons as she makes her escape, she is saved only by the appearance of Kage Tatsumi. A samurai assassin whose job it is to kill yōkai, the dark Shadow clan has sent him on a mission to the Silent Winds temple to retrieve the scroll, but he gets there too late. Using her natural kitsune instincts to trick and deceive, Yumeko convinces Tatsumi that the scroll piece had been sent on to the Steel Feather temple days before for safety, the monks doing danger was coming, and that is where she is heading, and persuades him to accompany her on her way there, to keep her safe. It's the only way to make sure she doesn't die, to complete her mission, and see that the scroll is safe. Even though she is in the company of one who would kill her without a thought if he knew she was kitsune, and especially if he knew she has the scroll.

I really loved Shadow of the Fox! It's such an awesome character driven story! It's dual narrated by Yumeko and Tatsumi, two characters who couldn't be more different. Despite being half kitsune, and therefore it being her nature to be deceptive, Yumeko is also innocent and filled with a child-like sense of wonder. She's never been anywhere except at the temple, and so their journey towards Kin Heigen Toshi gives Yumeko experiences she's never had before. She is excited and joyful about everything, and it's so beautiful to see someone so in awe of what most would take for granted. Even though she is quite a prankster, and finds tricking people amusing, she has been raised by monks, and so she is so good and so kind.

Tatsumi is the Kage's demonslayer and wields a sword named Kamigoroshi - The Godslayer - a sword inside which a violent, bloodthirsty demon full of rage, Hakaimono, is trapped. The sword helps Tatsumi to be practically unbeatable, but the demon is still conscious, and a bond between demonslayer and sword is always formed. Hakaimono can reach inside Tatsumi's head, and Tatsumi always has to fight to stay in control of the sword and of himself. He has been raised since he was very young to be emotionless, to withstand the harshest of treatment and feel nothing. For emotion is the way Hakaimono can slip inside him completely and take over. Any emotion is forbidden - the Shadow clan will kill him if there is any sign that Hakaimono might be able to take control. So he's never experienced kindness, or been touched with any kind of warmth or gentleness - at all, ever. Yumeko is unlike anyone Tatsumi has ever met before, because being in the company of anyone other than those in the Shadow clan for any length of time is forbidden, in case of emotion, but he has no choice this time. And Yumeko is so baffling to him, how she treats him like a human. Because, to the Shadow clan, he is not. He is a tool with a purpose, and must remain so, lest Hakaimono takes over and all hell breaks loose. But Tatsumi has his mission, he must retrieve the scroll or be executed, and Yumeko is the only person who can lead him to it's whereabouts, or so he believes. He is always walking on a knife's edge, but being in Yumeko's presence for days on end has made that knife all the more sharper, and staying free of emotion and keeping Hakaimono out of his head is becoming even more. As you can probably guess, there is a hint of romance. It's not the kind of romance we normally see, considering if Tatsumi knew the truth he would kill Yumeko, and so she is constantly trying to keep her true self and the scroll hidden. And considering Tatsumi is not allowed to feel anything. So it's the slowest of slow burns, jus the beginnings of the two coming to care for each other, but it was still so beautiful. I adored it!

There are other characters in the story who end up joining the two along the way, and the duo does become a band of people, do to Yumeko's kindness, and honour, and need to get the scroll to safety - despite Tatsumi wishing he could just get the damn scroll on his own, and be away from people who may cause him to feel anything. My favourite has got to be the ronin Okame, a former samurai who is without honour. He's straight talking and uncouth, and just completely hilarious. In a world where honour is everything, and you must be seen to doing and saying the right thing, Okame's lack of honour allows him to do and say as he pleases, and he's a breath of fresh air! He is so funny, but he's also loyal to those he decides matter, and is just brilliant. I don't want to say too much about the others because of spoilers, but they're such an interesting group, and it felt really familiar to the quest-style Western-inspired high fantasies I grew up on.

Speaking of Western-inspired, Shadow of the Fox is not. It's an #OwnVoices Japanese inspired high fantasy. We might not see much of the various yōkai, but the story was saturated with Japanese folklore as well as Japanese culture, and it's so immersive and gorgeous! It was just so fascinating! However, there were moments that felt slightly clunky, where information needed to be given to the reader about the various kami - gods - for example, but it was done so in conversation between people who would already know it. For example, they would all know that Tamafuku is a the God of Luck, but because we readers won't necessarily know that, they would say things like, "Tamafuku, the God of Luck, ..." It happened a few times that aspects of the culture or folklore were explained to the reader through conversation, when those characters would already know those things. It felt almost shoehorned in? And just a little clunky. But it's only a small thing.

The only other issue I had with the story is that, of the couple of people that we know of in this part of the series, we don't know what they want all the pieces of the scroll for. Obviously, it's to make a wish at the turn of the millenium, but what that wish is, we never know. It kind of makes sense that we don't know what the Daiyo - the leader - of the Shadow clan wants to wish for, because Tatsumi isn't important enough to know such things. He doesn't even know what the scroll does. He's just been sent to retrieve it. But, without spoilers, we do occassionally get to see what's happening with the other person who wants the scroll, away from Yumeko and Tatsumi, and so it would make sense there for us to know what wish this person would want to make? I mean, they are pretty desperate, considering all the things they throw at the two on their way to the capital. And towards the end we kind of find out something, but I do think we could have found that out earlier in the story, but still have known of the plans? Sorry to be cryptic, I don't want to give spoilers so I can't explain properly. I just would have liked to have known what people wanted to wish for. I think it might have added to the stakes a bit. These people cannot get hold of the scroll pieces, because if they do, X is going to happen. But we don't get that.

But again, that's just another small thing. On the whole, Shadow of the Fox is awesome. It's not quite as exciting, despite all the action that takes place - it feels more of a quieter high fantasy that's more about the people than it is about the action, but I loved that. And the ending, oh my god! Such a cliffhanger! I'm really excited to see where things will go in the sequel, Soul of the Sword, when it comes out in June next year!

Thank you to HQ Young Adult via NetGalley for the eproof.

Review: ‘Shadow Dancer’ Jared James N…
Mental Slot Review and Playtest (NoLi…
How to Price Your Craft & Design (par…
--
If you enjoyed this post, feel free to follow me on:
Bloglovin' | Twitter | Goodreads