Review: Empress of All Seasons by Emiko Jean 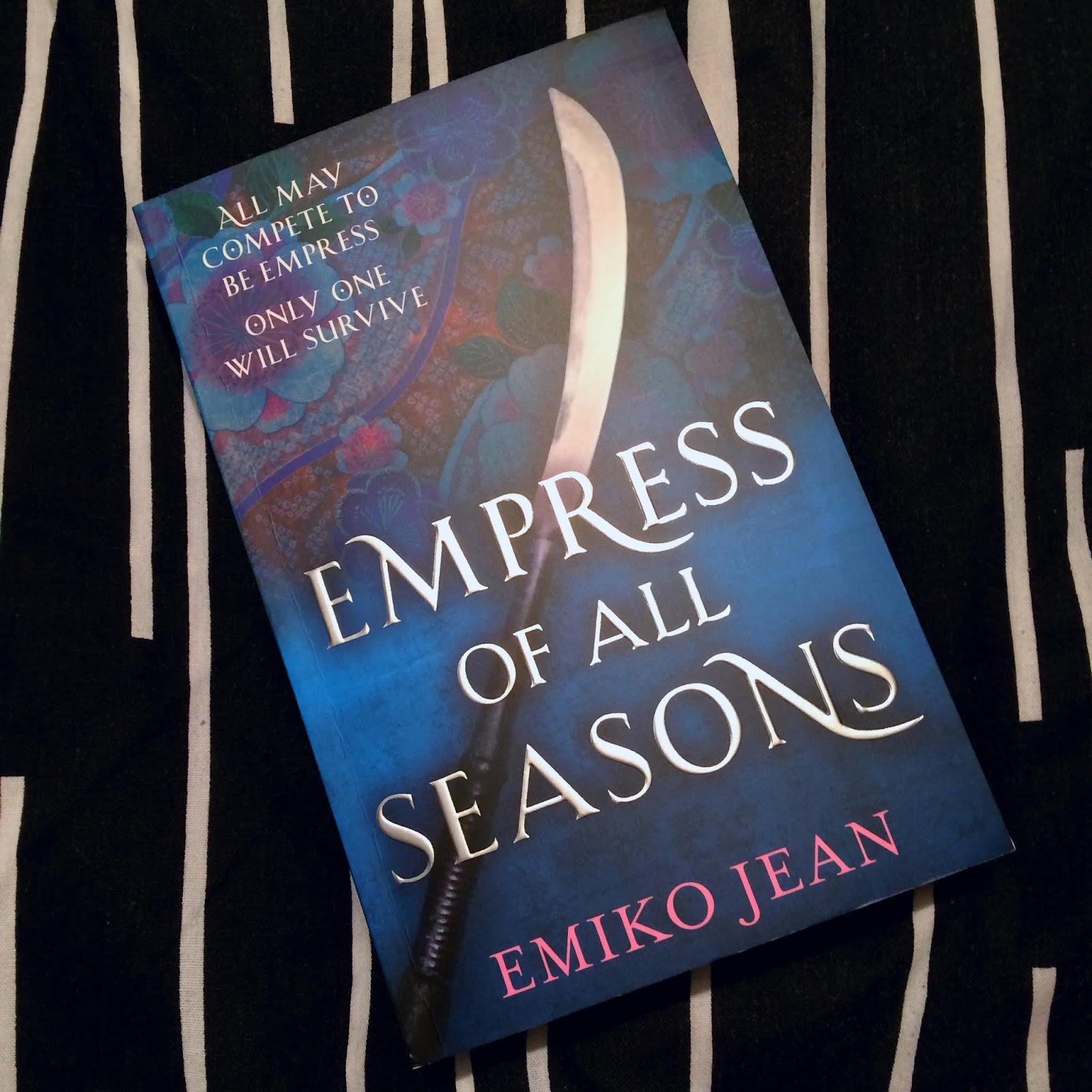 Empress of All Seasons by Emiko Jean (eProof)

In a palace of illusions, nothing is what it seems.

Each generation, a competition is held to find the next empress of Honoku. The rules are simple. Survive the palace’s enchanted seasonal rooms. Conquer Winter, Spring, Summer, and Fall. Marry the prince. All are eligible to compete—all except yōkai, supernatural monsters and spirits whom the human emperor is determined to enslave and destroy.

Mari has spent a lifetime training to become empress. Winning should be easy. And it would be, if she weren't hiding a dangerous secret. Mari is a yōkai with the ability to transform into a terrifying monster. If discovered, her life will be forfeit. As she struggles to keep her true identity hidden, Mari’s fate collides with that of Taro, the prince who has no desire to inherit the imperial throne, and Akira, a half-human, half-yōkai outcast.

Torn between duty and love, loyalty and betrayal, vengeance and forgiveness, the choices of Mari, Taro, and Akira will decide the fate of Honoku in this beautifully written, edge-of-your-seat YA fantasy. From Goodreads.

I was really looking forward to Empress of All Seasons by Emiko Jean. A high fantasy inspired by Ancient Japan and Japanese folklore sounded incredible. But I finished the book feeling a little let down.

In a world where humans rule, and yōkai, supernatural beings are feared and loathed, Mari is an Animal Wife; a yōkai who has two forms; one a beautiful woman, the other a beast. An Animal Wife's purpose is to trick men into marriage and then steal their fortune for their people. But Mari isn't fully formed; she isn't overwhelmingly beautiful like the rest of her people, and nor can she transform fully into her beast. Unable to to fulfil her purpose like other Animal Wives, her mother has trained her for a grander target: to become empress. You do not need to be beautiful in order to become empress, you just need to be the last woman standing in a competition where entrants have to survive four brutal seasonal rooms in the Palace of Illusions, where death is likely. She has trained her whole life to survive this competition, to become empress, to bring her people the largest fortune possible. But Mari just wants a life of freedom, a life without obligation, a life without the whole before the self. When she makes it to the palace, she discovers the yōkai in magical collars weakening their abilities, enslaving them, and people who would rather see them dead, she realises there isn't much chance of her ever finding freedom, or other yōkai.

Akira, Son of Nightmares, is half yōkai, half human, and Mari's friend. He's been in love with her since they were young, and hates the idea of her competing to become empress, of her marrying yōkai, he worries about what this will mean for Mari. The actions of Mari, Taro and Akira will have far reaching consequences, and they will change the world.

I really, really wanted to love Empress of All Seasons, I really did.  Being a YA high fantasy novel that is inspired by Ancient Japan, written by a woman of colour - the kind of book we really need - I was so hoping it would be incredible. The premise is amazing, and there was just so much to love, so that is what I'll talk about first. The world of Honoku is awesome, with the Japanese folklore that heavily inspired it. The yōkai are just so fascinating, so many different kinds of supernatural creatures that kept me googling whenever I came across a new one, to see artist's impressions. The creation story of the world, and the various gods and goddesses, and how they influenced the world we have today, and their own stories and how they treated each other, and the ramifications this had on the world and it's people.

The story is narrated by Mari, Akira and Taro. The yōkai are not seen as people, but as monsters. They are enslaved, controlled, and killed. With Mari competing to become empress, she's putting herself in such a dangerous situation; if anyone found out, she'd be dead. With Taro's narration, we get to see exactly what the Emperor thinks of yōkai, his disgust and his terrible treatment. He believes a yōkai killed his wife, the Empress, when Taro was born, and now all yōkai must be controlled, and any sign of going against the Emperor leads to death. Taro doesn't think like his father does, but his father will not listen to him, and doesn't really care about Taro anyway. He isn't the son he should be, wanting more, tinkering away in his workshop, engineering toys. Through Akira's narration, we discover more about how the yōkai are planning to fight back. We meet Hanako, the Weapons Master, a collared Snow Girl yōkai who, uncollared, can kill a person with her ice cold touch. She is the leader of the revolution, planning a war to overthrow the Emperor, and free her people. Hanako is spunky and funny, and probably my most favourite character in the book. And then we have the competition itself. Hundreds of women competing in rooms that are transformed into extremes of the world in each season, trying to survive, work out the riddle they are given, and finding the scrolls that will allow them to go forward in the competition. The rooms are brutal, and difficult, and in those rooms we see the worst of humanity and the best.

Empress of All Seasons is also wonderfully feminist. Honoku is a patriarchal world, and Animal Wives are taught what men expect of them, in order to find their husbands.

'The first and foremost lesson taught to Animal Wives was to be likable. A woman must be gentle and kind, never outspoken'. (p77)*

'Tami had dusted the girls with perfumes and powders and imparted advice: Men like the smell of self-worth, confidence. You must know your mind and speak it, but not too often. Men fear intelligent women. It means they are capable of anything. You must laugh, but not be funny. You must be spirited, but not strong'. (p142)*

And yet they are also taught not to give in.

And it's no surprise that women would compete in a competition to become empress, the most powerful woman, when their lives can be so difficult.

'Nori laced her fingers together and looked down at them. "I've often been told that I'm beautiful." Her lips twitched in disgust. "Most of the time it is because someone wants something from me, usually a man -- a smile when I was young, and later, my body. Before I left, a farmer named Jun proposed, and I remember looking into his face and thinking, He doesn't know me at all. When I rejected him, he grew spiteful, like I should've been elated that he wanted me. He said unkind things about me. I can't even repeat them. Then he set his tongue to wagging, spreading rumors about me. People are always so eager to believe what is untrue. He said we spent the night together. It was enough for my family to stop speaking to me. I was a leper in my own home."' (p170)*

'"I know why you're here. It's why I'm here too. Why we all are, I imagine." Asami's eyes glowed, two burning coals. "We've been pushed around and forced into quiet rooms out whole lives. Nobody's ever asked us what we wanted. The prize isn't the prince. It's the power."
Mari's eyes lifted from the fire to Asami. Her gazed pivoted back and forth between Asami and Nori, sweeping over them like water.
Nori bit her lip. "You're right. After I rejected Jun, my father sat me down and said, 'You are pretty and want too much.' I asked him, 'What is too much? Love? Equality?' He said, 'Yes. You are pretty. That should be enough.'"' (p170-171)*

For all that's great about this story, for all I loved, I'm just not sure it was executed very well. Empress of All Seasons is a stand alone novel, but I feel it should have been at least a duology. Before Mari leaves for the Palace of Illusions, everything was great, it was paced well, and nicely developed, us learning about the yōkai, the Animal Wives specifically, and their lives. But once she gets to the palace, everything changes. Everything happens super quickly, and is over before you know it. In terms of reading time, we spend very little time at all in each of the seasonal rooms. While for Mari hours are going by, for us, it's just a chapter. And yes the rooms are brutal, and some of the things she witnesses, some of the things the other contestants do are awful, but you barely get time to feel anything or react before it's moved pass. The book is 366 pages long, with three narrations. You get very little time with each narrator, so everything happens quickly; the competition, the plans with the revolution, the romance between Mari and Taro. There was no romance. They know each other for a matter of days, and fall in love without really knowing each other. It happens for too quickly, there's no real development to it, so I didn't feel it. I didn't believe it, and I didn't really care - there was no time to care. And the relationships Mari forms with her other contestants could have been so, so beautiful, with characters we could have really grown to love, but everything moves so fast we don't get the chance.

As I said, I think this book should have been a duology. In my opinion, everything that happens after the competition has ended should have been it's own separate book. The first book could have built up the relationships more; the friendship between Akira and Hanako, the romance between Mari and Taro, the friendships and sisterhood between Mari and fellow contestants Asami and Lori. It could have built on the time spent in the seasonal rooms, spent more time on each, making them feel as terrible as they're described. And then the second book could have dealt with the resulting outcome of the competition, the revolution, the betrayal, the war. This story could have been so incredible if it was longer, if it was developed more. Everything is there! It has everything it needs to be an amazing story, but it felt rushed, and I never felt all that connected to the characters or the plot. I was more invested in learning more about the world and it's various inhabitants than I was in the actual story, because everything happened too quickly for me to become invested. And it's such a shame. The story ends with the possibility of companion novels, but whether they'll happen or not, I don't know.

There is so much about this story that is undeniably awesome, but I was disappointed overall. A number of people really enjoyed Empress of All Seasons, though, so do read some other reviews before deciding whether or not to read it.

Thank you to Gollancz via NetGalley for the eProof.

*All quotes are checked against a final copy of the book.

SMDC Ties up with Lamudi
Happy Thanksgiving 2019, Over and Und…
Review: A Torch Against the Night by …
Committed: Civil Rights and the Stru…
Sunless Skies (PC) Review
--
If you enjoyed this post, feel free to follow me on:
Bloglovin' | Twitter | Goodreads

Review: Empress of All Seasons by Emiko Jean