On YA Books, the Teen Audience, and Reading YA as an Adult 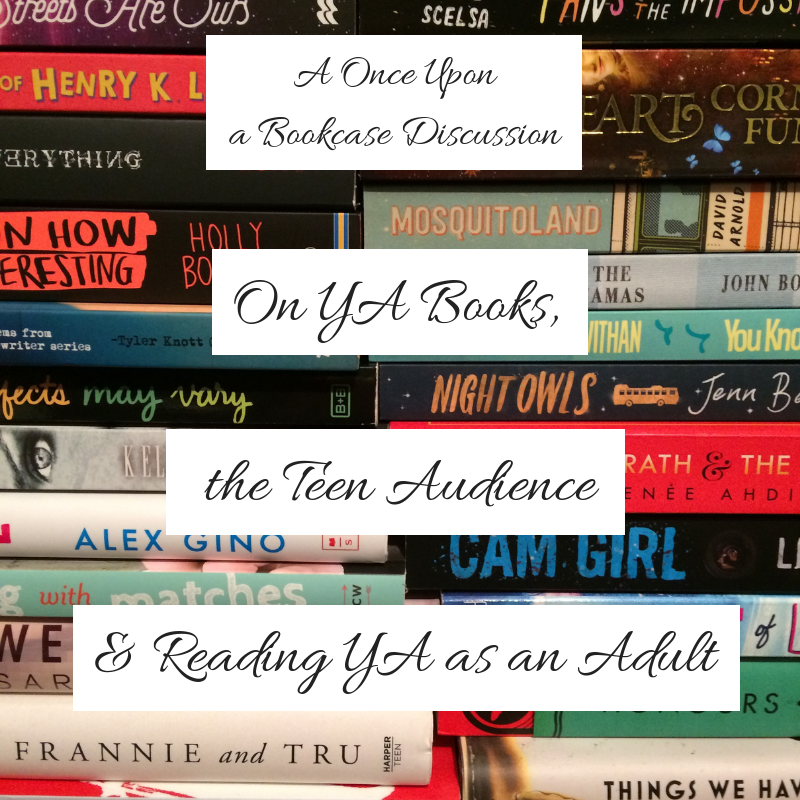 Trigger Warning: In this post, I mention my sexual assault.

Today I want to discuss a few things inspired by a blog post by Vicky of Vicky Who Reads, The May Ways YA Books & The Community Isolate Teens. It's a really important post that I feel anyone who reads YA as an adult, or who works in the publishing industry, or writes "for" teens* should read. For the most part, Vicky talks about how teenagers - who YA is aimed at - do not have a lot of money to spend on books, so when it comes to what books are published, based on what sells, it's the adult YA readers who have control of that, because it's adult YA readers who have the money to spend. And what sells tends to be YA with older YA characters, or characters who act like adults with a YA story. This means that Vicky, and other teens, while they enjoy these books, they don't feel they necessarily reflect teen experiences or represent teens. It also means that there are fewer books for those teen readers who are around 13, because most YA tends to feature older teens, and they're not so interesting for younger teens. Vicky herself spent about two years not reading because she didn't feel there were any YA books that about younger teens. It's a really interesting and thought-provoking post, and I really recommend reading it, especially before continuing reading this post.

For me, I found Vicky's post really made me think in regards to myself as a reader, a book blogger, and a bookseller.

I am an adult who reads YA. I started reading YA as an adult. My reading roots are in high fantasy, and as a teen, that's all I wanted to read - once I had discovered high fantasy, but before that, I didn't enjoy reading. I discovered YA through a optional module I took at university, Young Adult Fictions, which looked at media aimed at teenagers - primarily books, but also TV and movies. It was Twilight that did it for me (I know, I know, shh), and firstly I was just reading urban fantasy, YA and adult, but eventually branched out into all YA. Why do I love YA so much? Because I was sexually assaulted on the way home from school when I was 11, and it affected me badly. I didn't have the typical life most teenagers led. I didn't go out with my friends until my late teens. I barely went out at all on my own, more so with adults. I didn't really socialise as a teen or have those teenage experiences most people just expect you to have had. Through YA, I get to vicariously live through the YA characters, and experience all I didn't as a teen. There's also the fact that the stories tend to be amazing, but it's also that I relate to the teenage characters and the things they experience for the first time, because I experienced most of those things as an adult. Those teenager characters represent adult me, and I really relate to them.

However, I am guilty of not enjoying books where the characters are quite young. Most of the time, this is when teenagers are 16/17 but feel, to me, like they're acting 13, and it just feels wrong and unrealistic. I don't have a problem with 13-year-old characters acting like 13-year-olds... and yet, I can't remember the last YA novel I read which featured a 13-year-old protagonist. Perhaps these books that I find too young are the books written for those younger teens, yet are aged up because books featuring older teens sell? Because really, I'm struggling to think of any novels that feature young teenagers. So it looks like Vicky is right, and there is a lack of younger YA. But there's also the fact that, although I may relate to teenage YA characters, I am an adult, and these characters are teenagers, and although we know teenagers are smart and are critical thinkers, and are doing so much today in the way of activism, sometimes teenagers are young, and a little naive and emotionally inexperienced. So it's not unrealistic to have characters act like that, whatever their age. Though I do think it's a possibility older characters sell better than younger characters.

It also got me thinking about what I do as a book blogger for teenage readers. I do feel a responsibility to my possible teenage blog readers, in regards to what I'm reading and talking about. I read diverse books not just because I want to and should do, but also because I have this little platform, and through it, there's the chance that I could be recommending a book to a teenage reader who really needs it. I'm very aware of that. But not so much, I've realised, when it comes to my giveaways. While I may sometimes hold giveaways tailored to specific marginalised groups, I don't limit them age-wise. And when I think about it, I don't think a teenager has won any of my giveaways for a long time. And considering what Vicky said about teenagers not having the money to buy all the books, surely I'm doing teens a disservice by not making my YA giveaways open to teenagers only? I do think there are possible issues to having giveaways to teens only, such as not wanting young teenagers to be handing out their personal information such as their address, and not being able to be certain that the entrant is either a) a teenager themselves, or b) entering on behalf of a teenager (to solve the issue of teens giving out info). They could say they're 16, or they could say they're entering on the behalf of their teenage child, but there's no way for me to verify that. However, I do think it's something I need to figure out, because the books I give away should go to teens.

And then there's the thoughts I had as a bookseller. I am not one for banning books, and telling teens what they can/should and can't/shouldn't read. However, at the same time, teens also know what they want and don't want to read, and what they are and aren't ready for. So when I have a teen asking for recommendations, who has told me what they've enjoyed, what they're looking for, and what they don't want, and the books I'm coming up with fit their requirements in some ways, but in others, feature content they don't want, it can be a struggle. And it goes back to what Vicky says about what teens want to read, over what adults want to read, and characters acting like adults. Or, maybe, featuring more "adult content". I'm not saying teens can't and don't want to read books with so-called "adult content", but for those who don't, it can be a bit of a struggle. And as Vicky said, teens don't necessarily have the money to buy books, so a lot of time, I'm dealing more with adults who are buying for a teen, or teens with adults who hold the purse strings, and what they do and don't want the teenager reading comes into play, too. Mate, I cannot tell you how many times I have dealt with adults who feel some YA books are "inappropriate" for their younger teenager, are for slightly older teens (or shouldn't be read by teens at all), and don't want to buy them, and as I said, I'm not for censorship, but I can't force these people to buy these books. But as I said before, I also struggle to think of books where the main characters are younger teens, whose stories would feature less "inappropriate" of "adult" content. Mate, I've had a parent turn down Jenny Han's books, and they're some of the tamest books I know.

So I think there is a lot in what Vicky says. And like her, for the most part, I don't know the answers or of any solutions. But I know that there are some changes I can make, as a book blogger, to help and benefit teens. I was also thinking of maybe trying to find more teen book bloggers, in order to follow and raise up their voices, but then I'm not sure if that would be inappropriate as an adult. There's a lot still to think about, and try and work out how I can make a difference myself in this community to help teenagers, but I think it's work we should all try to do. As Vicky said, YA books are primarily for teens.

Over to you guys! What did you think of Vicky's post? What do you think we, in the YA community, can do to help teens? Let me know your thoughts!

*I know a lot of authors say they don't actually write for an audience, they write for themselves, the books they would want to read, hense the for in speechmarks. In other words, anyone who writes books that are catergorised as YA.

On YA Books, the Teen Audience, and Reading YA as an Adult