Once Upon a Retelling: Damsel by Elana K. Arnold

Today, I've got something a little different for you guys. Elana K. Arnold is stopping by to discuss her original fairy tale, Damsel. It's not a retelling of a specific fairy tale, but it takes the tropes of fairy tales, and turns them on their head. It's an original story that looks like a fairy tale, but the story is not what you would expect. And it sounds amazing! So without further ado, on to the interview. 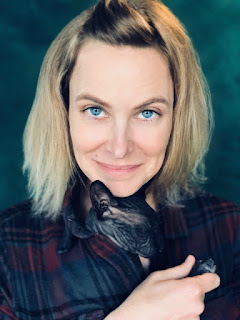 Can you tell us a little about Damsel? How does it differ from other fairy tales we know?

Here’s the official synopsis, which I think does a pretty good job of setting up the story:

A dark, twisted, unforgettable fairy tale from Elana K. Arnold, author of the National Book Award finalist What Girls Are Made Of

The rite has existed for as long as anyone can remember: When the king dies, his son the prince must venture out into the gray lands, slay a fierce dragon, and rescue a damsel to be his bride. This is the way things have always been.

When Ama wakes in the arms of Prince Emory, she knows none of this. She has no memory of what came before she was captured by the dragon or what horrors she faced in its lair. She knows only this handsome young man, the story he tells of her rescue, and her destiny of sitting on a throne beside him. It’s all like a dream, like something from a fairy tale.

As Ama follows Emory to the kingdom of Harding, however, she discovers that not all is as it seems. There is more to the legends of the dragons and the damsels than anyone knows, and the greatest threats may not be behind her, but around her, now, and closing in.

What drew you to fairy tales, and putting your own twist on them with your original story? And what inspired you to tell Ama’s story?

I have always loved fairy tales. Among the books I read growing up was a tattered illustrated collection of Grimm retellings, and as I got older, I sought out other versions of the stories, finding that each time I took a step closer to the origin story, the tales grew darker, more morally complex, and, in a world, grimmer. DAMSEL isn’t the first time I’ve played with fairy tales; my 2015 title INFANDOUS weaves my retelling of fairy tales and mythology through the modern-day story of Sephora Golding, a found object artist and surfer, who is trying to come to terms with a grim secret of her own, and last year’s WHAT GIRLS ARE MADE OF puts an ironic fairy tale spin on Virgin Martyr Saint stories, among other things. I think it is my bone-deep love for fairy tales that pushed me to write an original, novel-length fairy tale.

What do you bring to the genre of fairy tales with Damsel?

I bring rage. Lots of rage. In our current moment in the States, with a morally corrupt (or perhaps amoral) leader who boasts of sexually assaulting women, with a rash of men whose desires have trumped women’s right to a safe workplace, to a society still sorting through issues of gaslighting, rape culture, negging, and more, I bring my fire-hot rage. Listen. Fairy tales have long been about women and girls, but written by men. A fairy tale can be used to teach a lesson to girls— Stay out of the woods! Avoid the wolf! Be good and obedient, and you’ll be rewarded!— or it can be used to give language to experience. The latter path interests me. How does Damsel differ from other novels that switch things around with the tropes of fairy tales?

Many other YA novels that use fairy tales are retellings, and this is great. We should retell all the stories, over and over again, and reclaim them in a million different ways. But DAMSEL is not a retelling. It is a singular creature that sprang to my mind fully formed and insisted on being told.

Were there any difficulties in writing a fairy tale that tackles fairy tale tropes we already know, over writing a completely original story? Anything that was easier?

Writing a fairy tale is entering into a conversation that began long before I entered the room, a conversation that will continue long after I leave it. This was a pleasure and a privilege. Every book is a challenge, because though I’ve written other books, I’ve never written the book I am writing until I have written it, so I have to create new tools. In this case, I chose to structure the book in seven sections, with seven chapters per section, and each chapter has a possessive title—"The Prince’s Belt," for example. Seven is a fairy tale number, so seven sevens felt especially apt from a structural perspective, and it’s a novel about ownership and agency, so possessive titles for the chapters felt meaningful.

What do you hope readers get from Damsel?

What do you think makes a good retelling, or addition to the fairy tale genre?

Each of us comes to fairy tales both with a shared cultural perspective and also a unique lens, shaped by our personal family culture, religion, lived experience, and more. I think the best retellings or additions to the fairy tale genre explore both the universal and the specific and do so with honesty and bravery.

Are there any retellings or new fairy tales you would recommend?

One of my very favourite books is Margo Lanagan’s TENDER MORSELS. It’s a retelling of Snow White and Rose Red, and a warning— it is devastating. A book I’m incredibly excited to read is Anna-Marie McLemore’s forthcoming BLANCA & ROJA, a story about sisters, swans, love, hate, and magic.

Thank you, Alana, for such an incredible interview! I don't know about you, but I am so excited to read Damsel, it sounds absolutely incredible! And I am loving the idea of an original fairy tale that has a lot of rage in it! I think this is going to be an important book, and one we need. Be sure to visit Elana's website, follow her on Twitter and Instagram, and check out Damsel, which came out today, 2nd October!

The rite has existed for as long as anyone can remember: when the prince-who-will-be-king comes of age, he must venture out into the gray lands, slay a fierce dragon, and rescue a damsel to be his bride. This is the way things have always been.

When Ama wakes in the arms of Prince Emory, however, she knows none of this. She has no memory of what came before she was captured by the dragon, or what horrors she has faced in its lair. She knows only this handsome prince, the story he tells of her rescue, and her destiny to sit on the throne beside him. Ama comes with Emory back to the kingdom of Harding, hailed as the new princess, welcomed to the court.

However, as soon as her first night falls, she begins to realize that not all is as it seems, that there is more to the legends of the dragons and the damsels than anyone knows–and that the greatest threats to her life may not be behind her, but here, in front of her. From Goodreads.


This post first appeared on Once Upon A Bookcase, please read the originial post: here
People also like
18+ Adult Movies Of All Time To Fulfill All Your Sexual Fantasies| Lolita, Exotica and More
A Furry’s Guide to Cryptocurrency
Literary breaks: 11 UK writers’ houses that are now holiday homes
How To Kill Bed Bugs
How to Draw in Extra Attendance and Increase the Number of Ticket Sales
Drap de bain Pétale Roseau
The Stoic Physician
2020 Gift Guide: 25 Best Unicorn Toys for Girls

Once Upon a Retelling: Damsel by Elana K. Arnold