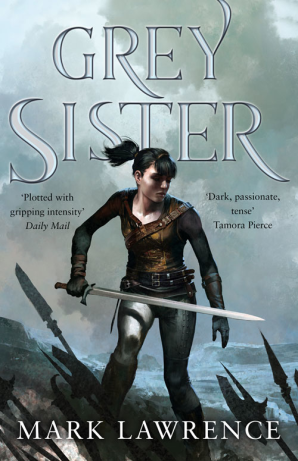 Grey Sister by Mark Lawrence (eProof)WARNING! I cannot review this book without spoiling the others in the series. Read no further if you're planning on reading this series and don't want it spoilt for you.

In Mystic Class, Nona Grey begins to learn the secrets of the universe. But so often even the deepest truths just make our choices harder. Before she leaves the Convent of Sweet Mercy, Nona must choose her path and take the red of a Martial Sister, the grey of a Sister of Discretion, the blue of a Mystic Sister or the simple black of a Bride of the Ancestor and a life of prayer and service.

All that stands between her and these choices are the pride of a thwarted assassins, the ambition of a would-be empress wielding the Inquisition like a blade, and the vengeance of the empire’s richest lord.

As the world narrows around her, and her enemies attack her through the system she has sworn to, Nona must find her own path despite the competing pull of friendship, revenge, ambition, and loyalty.

And in all this only one thing is certain.

There will be blood. From Goodreads.

I have been patiently waiting for Grey Sister by Mark Lawrence. I absolutely loved the first in the Book of the Ancestor trilogy, Red Sister, and I knew it's sequel was going to be epic. I never realised just how epic this book would be. It's absolutely incredible.

Grey Sister is going to be a very difficult book to review without giving spoilers, because everything changes in this story. Everything. And it's impossible for me to summarise this novel without giving things away. Nona had a hard time in Red Sister, but that's noting compared to what she goes through in Grey Sister. Nona has periods of a somewhat peaceful life in Red Sister, but that is not the case in this book. Once things start to head south, they go from bad to worse. Grey Sister is action packed, tension-filled, and bloody stressful to read. So much violence, so much danger, so many times when it looks like death is the only possible outcome. Seriously. I knew while reading that this was a trilogy, but more times than I can count I was absolutely certain death was on the cards for the characters, but especially Nona. This is absolutely an edge-of-your-seat read, and completely unputdownable. It's bloody brilliant!

Nona really grows in this book, I think. She's still a a little fireball of rage, but she learns about herself, and how important love and friendship is to her. Not just that it's important - it's important to everyone - but how love and friendship makes a difference to the person she is. The choices she makes, and what those choices lead to. She could make very different choices if it wasn't for the importance of her friends and how she loved them. This doesn't stop Nona from being the violent, stabby, super quick ball of fury that she is, but emotion plays a strong part in this book for her. I'm pretty sure it did in the first, but it's been a while since I read it, and I feel it's more so in this one. It's so beautiful to see.

I liked how we got to see a bit more of some of the other characters, too. I'd say there were three narrators, though technically it's two, maybe 2.5. I can't explain it, for spoilers, but we do see from the perspective of three characters; Nona, as expected, Abbess Glass, which we saw from the perspective of a little bit in Red Sister, but a lot more so in Grey Sister, and a third, which I can't really talk about. Abbess Glass' perspective is really fantastic to see, because we get more of a glimpse of what's going on behind the scenes, the strings she's pulling, the machinations coming into play. It's a slow process, but seeing things unfold, even though as a reader you're not entirely sure what's going to happen, but that Glass has got a few things up her sleeve. But again, you never really know how the cards are going to fall, and it's so brilliant.

The ending is incredible. Such a climax! Such a cliffhanger! I am so desperate to know how the ending will affect things for Nona, Abbess Glass, and Sweet Mercy! I knew Grey Sister was going to be epic when I finished Red Sister, but it completely surpassed my expectations! It's a hugely emotional, fast-paced story, and I absolutely loved it! So many unexpected revelations and discoveries! Oh my god, I have no idea how things are going to pan out in the next and final book, Holy Sister, which comes out in April next year, nor how things are going to be wrapped up! Grey Sister is an absolutely incredible follow up to Red Sister, and I cannot wait to get my hands on Holy Sister, and see what Lawrence has in store for Nona and Sweet Mercy next!

My other reviews from the series:
Red Sister (Book of the Ancestory Trilogy Book 1)
--
If you enjoyed this post, feel free to follow me on:
Bloglovin' | Twitter | Goodreads


This post first appeared on Once Upon A Bookcase, please read the originial post: here
People also like
Ecosusi – 15% discount on Messenger Bag
A Guide To Visiting Antigua, Guatemala: The Best 5 Things To Do And See
How come so many Christians don’t really know God?
Asus ROG Strix G15 AMD Advantage Edition Review: An All-Out AMD Powerhouse