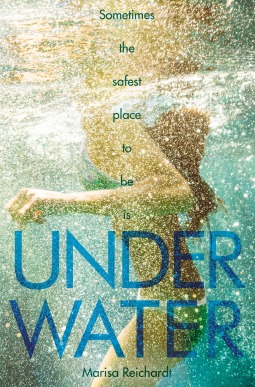 Underwater by Marisa Reichardt (proof) - “Forgiving you will allow me to forgive myself.”

Morgan didn’t mean to do anything wrong that day. Actually, she meant to do something right. But her kind act inadvertently played a role in a deadly tragedy. In order to move on, Morgan must learn to forgive—first someone who did something that might be unforgivable, and then herself.

But Morgan can’t move on. She can’t even move beyond the front door of the apartment she shares with her mother and little brother. Morgan feels like she’s underwater, unable to surface. Unable to see her friends. Unable to go to school.

When it seems Morgan can’t hold her breath any longer, a new boy moves in next door. Evan reminds her of the salty ocean air and the rush she used to get from swimming. He might be just what she needs to help her reconnect with the world outside. From Goodreads.

Underwater by Marisa Reichardt is a book I was hoping would be a really great portrayal of agoraphobia, as I have read only a few novels with main characters who have agoraphobia. However, I was really disappointed with this book. It's really problematic, and so incredibly slow.

I understand that Morgan has agoraphobia, and so there is only so much she can do at home, but that doesn't mean the pacing has to be slow and the story uninteresting. Under Rose Tainted Skies by Louise Gornal is a great example of a story with a main character who has agoraphobia and is really interesting and gripping. You don't need to step outside your house for things to happen. But, in the great scheme of things, nothing really happened with Morgan, and I was pushing myself to keep on reading when I wasn't gripped at all.

Also, I felt like some of the characters in this book were just awful to Morgan. The girl has a mental illness, and yet she gets so much flack for it. From Evan, the new boy next door, and even from her psychologist, Brenda. At different times, they both have a go at her for how she deals with things. Morgan has a really bad relapse at one point, where she ends up just lying on the floor for hours. She's found when her mum and brother get home, and Evan sees her there. He knows, ok? He knows she has agoraphobia and anxiety, he knows. So when Morgan needs some space and isn't able to talk to him for a few days, he gets so mad. Sure, maybe she should have let him know that she can't talk for a while, but, actually, how about a little understanding and just see that she is unable right now, that she needs some time? I don't see how that is so difficult to understand. But he acts like she's been a right cow and was ignoring him for no reason, and gets mad at her, makes her feel bad, and acts like he's the victim, the one who has been wronged. He describes her relapse as a pity party. A pity party! As she ignored him, he's now ignoring her. This is Not ok! So not ok! I can't tell you how mad it made me! And it makes him look really childish and pathetic, too. He never apologises for his behaviour, and only wants to know her again when she starts to make progress with her mental illnesses. Because she's someone worth knowing once she's a bit more "normal", right?

And Brenda, her psychologist, who shouts at Morgan when she's frustrated with her for what she believes is her pushing people away. Maybe she hasn't been dealing with things in the best way, but she has mental illnesses, she's been through a huge ordeal, and she's trying her best here. Shouting at her because she's not doing what you want isn't going to help her. It's so god damned wrong, and it made me so angry. You cannot blame people for having mental illnesses! It's not something we can control, and sometimes we just need to look after ourselves for a while. There is nothing wrong with that.

I've discovered that Morgan's recovery from agoraphobia is realistic since finishing the book, from reading other reviews from people who have experienced similar (here and here), though I did frown a little at the progress Morgan made while I was reading. I do not have agoraphobia, and I never have, so I wasn't coming at this from a place of experience, I was coming at it with what I've learned from other books. And I wondered if Morgan was making progress far too easily to be realistic. She wasn't "cured" of her agoraphobia by the end of the book, you can't be cured of your mental illnesses, but, from what I'd read before, it seemed unrealistic to me that someone with agoraphobia, who has made it a small distance outside the door, would find it no problem at all to make that distance again next time. From what I understood, it's really difficult, during recovery, each time a person steps out the door. Not that they can't or don't make it, or that it doesn't get easier as time goes on, but walking five steps outside the front door, I thought, isn't going to be super easy next time simply because you've done it once before. She was absolutely fine walking outside the door for distances she's already accomplished, she only starts to feel anxious when it comes to extending those distances. But before you know it, she was walking out the door, going down the steps and jumping into the swimming pool in the courtyard like it was absolutely nothing. So I did wonder if the representation of recovery was realistic, but the reviews from people who know say it is, so it's good that the representation is spot on.

I did have an issue with the fact that Morgan's mental illnesses are never mentioned by name, though. I say she has agoraphobia because she has panic attacks (at the beginning) when she tries to leave her house. I say she has anxiety, because she has panic attacks when reminded of the school shooting through news reports on the TV. She may have depression, too, after the relapse where she was just lying on the floor for hours, and I think she probably has PTSD, too, but I couldn't say with any real certainty that she has depression and/or PTSD. But we're never actually told that she has agoraphobia and anxiety, or anything. She just doesn't leave the house anymore, has panic attacks, and sees a psychologist. And I just don't understand why there would be no naming of the mental illnesses? Honestly, I don't understand why they wouldn't be mentioned. And I think not mentioning them is just making them out to be dirty words, shameful words you don't mention. Which is wrong, because there is nothing shameful about having a mental illness. I really think it should have been stated what mental illnesses Morgan has, for her to say the words, and show that, although it's hard, it's actually not something to feel bad about.

Despite the representation being well written, becuase of it's problematic elements, Underwater is not a book I would recommend. Nobody with a mental illness should be made to feel bad for having a mental illness.

Thank you to Macmaillan Children's Books for the proof.


This post first appeared on Once Upon A Bookcase, please read the originial post: here
People also like
Hydrant – Hydrate Grapefruit Flavor
11 Unforgettable Things to Do in Belize — Important Tips & Places to Stay
Useful Tips for Building a Stronger Company Culture
Will there be homeless people in Heaven? Who cares?
Is Botox Poisonous to Patients?
How to Develop a Telehealth App like Teladoc?
Can’t Grow a Beard: 11 Proven Hacks to Boost New Growth