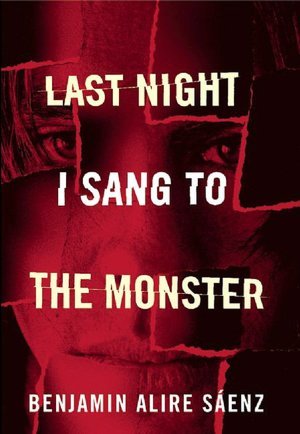 Last Night I Sang to the Monster by Benjamin Alire Sáenz (bought) - Zach is eighteen. He is bright and articulate. He's also an alcoholic and in rehab instead of high school, but he doesn't remember how he got there. He's not sure he wants to remember. Something bad must have happened. Something really, really bad. Remembering sucks and being alive - well, what's up with that?

Last Night I Sang to the Monster by Benjamin Alire Sáenz is an absolutely heartbreaking novel, but one with such a beautiful, uplifting ending.

Zach is an 18-year-old biracial boy - half-Latino, half-white American - who is very smart, very talented, but very troubled. He is in a facility for those with various mental illnesses, and is in the group with the addicts for his alcoholism. He's been there for three weeks, and knows he was in hospital before that, but he doesn't know why he was in hospital, and he doesn't remember going to the facility. All he knows is that his repressed memories must be something awful, and he absolutely doesn't want to remember. But if he is to heal, get better, and get out this place, remember he must.

I found Last Night I Sang to the Monster very difficult to get into. The whole book is written as if Zach is talking to someone, so it feels less like a narration, and more like he is recounting events that have already taken place, even though, for the most part, he is talking about the present. It was very strange style that I didn't enjoy first of all, what with Zach starting a lot of sentences with "Look", and with him correcting himself when he's not telling the whole truth. The first few chapters have very little dialogue, so it was just Zach's constant talking to the reader, telling not showing, and because I wasn't enjoying the style, I found it very difficult to enjoy. But once I got used to it, and once he was done recounting his home life before whatever happened, and started talking about what was happening at the facility, where there was more dialogue, I absolutely fell in love.

This is not an easy book to read. It's hard. It's a complete emotional rollercoaster, and it's just so upsetting. Zach had a very unhappy home life. His dad is an alcoholic, his mum is agoraphobic and has severe depression, and sexually assaults Zach, and his brother is a very violent drug addict, who beats up both Zach and their dad. There was very little love in his home. As if this wasn't enough to deal with, he himself is always sad. His home life is enough to make anyone sad, but he's doubly sad; he's just a sad person, and he believes God made him sad. I'm pretty sure he himself suffers with depression, but that's never mentioned. He also has very low self-esteem, and finds it very difficult to accept compliments or to deal with kindness from people - like Mr. Garcia, his English teacher, who knew something wasn't right - who care about him. He doesn't feel he deserves kindness or people caring about him, and it triggers his anxiety. Because of how sad he is, because of his anxiety, because of life at home, he drank. He knew all his dad's hiding places, and would steal his bourbon, and walk around town, drinking.

And although he's now in the facility, and he's got a therapist, and attends the group meetings, he's still very much the same. Still very sad, still suffers with his anxiety, although he's now taking medication for that, and still struggles with his self-esteem. He avoids dealing with what brought him there, desperate not to remember, because he knows he just can't deal with it. My heart absolutely went out to this poor boy who doesn't seem he could get any lower. He's really, really struggling, and it's so difficult to read.

But I absolutely love the relationships Zach forms at the facility. With his therapist, Adam, who he has a love-hate relationship with, but who is just a wonderful therapist who genuinely cares, and genuinely wants to help him. With Rafael, one of his roommates, a 53-year-old man who is also an alcoholic, and has his own terrible, terrible back story, but who is the most gentle and kind and completely incredible man. I loved him. I wish he was real, and I wish I knew him. And Zach's relationship with Sharkey, and later, Amit, fellow roommates who are drug addicts, who are tougher and hard, but also really good guys too who are struggling with their own demons. There is so much to love about the people he meets, the relationships he forms with them, and how they help his own recovery.

Another thing I absolutely loved about this book was how much it talked about feelings. There were female characters in the story, but they aren't as important to Zach and his story as the male characters, and for guys to be sharing and expressing their feelings on the page was just incredible. And it's not just in regards to therapy and how they have to talk and be honest, but more about how they feel about each other. Rafael is incredibly honest when it comes to expressing how he feels, and I think seeing an older man act this way helps Zach, even though it's never really discussed. We get to read how difficult Zach finds dealing with how he feels for the various men in his life, how he knows he loves them, but has difficulty expressing that, but yet having all these rolemodels who get very honest about how they feel. We live in a world of toxic masculinity, where expressing emotion for a man is seen as weak, so it was just incredibly beautiful and so refreshing to see Zach dealing with this, learning how to feel what he feels and be honest about it, and seeing so many other men talking about their feelings. It was just so wonderful.

I can't say too much more about this book without spoiling things. Last Night I Sang to the Monster is such an incredibly difficult, hard-hitting read, but with such beautiful ending. I can't recommend it enough, but do be prepared to be an emotional wreck.