I'm really excited to have Lucy Christopher stopping by the blog for the Once Upon a Telling, to talk about her latest novel, Storm-Wake, a retelling of William Shakespeare's The Tempest. 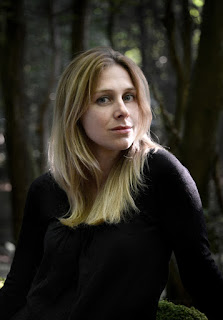 Can you tell us a little about Storm-Wake? What kind of a retelling of The Tempest is it?

Storm-Wake is set now, though it might not be immediately obvious at first. It takes Miranda’s story from The Tempest and it transplants it to become Moss’s story. Moss’s exploration charts her discoveries of what is real and what is dream in the strange, flower-filled island that her pa has taken her to in order to avoid the floods and darkness he’s said have taken over the rest of the world.

Why The Tempest? What drew you to this Shakespearean play? And what inspired you to retell it?

The Tempest has been tangled inside me for years. The first production I saw of it was on a beach during a Melbourne winter; I was fifteen. It was raining and the actors were terrible, but, even so, I was entranced. With the tide coming in and the rain coming down, it had a raw impermanence. A wildness! Years later, I saw The Tempest outdoors again, in South Wales, and it rained so hard that it was often impossible to hear the lines of the cast. Again, I loved it. I’ve often wondered whether it’s not the words of this play I love the most, but its atmosphere: its meandering between the realms of dream and reality. Its delightful strangeness.

That is what I have tried to capture in Storm-Wake. An atmosphere. A state. A setting of a different kind – one that moves between reality and dream, one that is more of a feeling than a thought. Most of all I’ve tried to capture Miranda’s – Moss’s – story. I’ve imagined what a different kind of Tempest might be like, one that focused on this (overlooked) character’s life and dreams.

What do you bring to The Tempest story with Storm-Wake?

As well as Miranda, I also wanted to give power to Caliban through my character of Callan. To me, Miranda and Caliban are the most interesting and dynamic characters in The Tempest, and yet, they are the most put-upon, most dominated. What if their story was allowed to end differently? What if they could find endings they chose for themselves?

Furthermore, by deliberately and obviously constructing Storm-Wake within a Shakespearean 5-Act play structure, I’m asking readers to move between being swept away in the 'dream' of the story, while also being aware that it IS a story I’m creating – one that invites its 'viewer' to notice this fact through the pauses between acts, in the interval, in an encore. Shakespeare’s Tempest is all about the construction of art, after all! I think that by saying "we are such stuff as dreams are made on", Shakespeare is asking us to consider the role that dreams, or the unconscious, have in that construction too.

I hope Shakespeare would approve of what I was trying to do with Storm-Wake: for Moss to realise she will be "the dreaming and the real, in one". And for me to invite readers to consider the role of dream and reality for them, also. 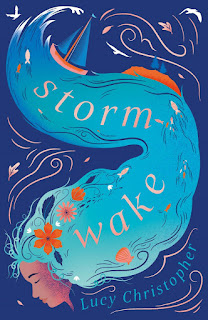 How does Storm-Wake differ from other retellings of The Tempest out there?

It is very different to Margaret Atwood’s Hag-seed, which tells Prospero’s story in a modern amateur dramatics context. Marina Warner’s Indigo focuses more on Sycorax’s story and is set in the 17th and 18th Centuries. The only young adult book I am aware of which uses The Tempest as inspiration is by Aimee Friedman called Sea Change: this is set on Selkie Island in America and puts teen romance very firmly on its agenda.

Absolutely! How to make a retelling different and still worthy of being read while the original is so important and brilliant is an obvious difficulty. What was fun, and in some ways easier, is that I already had themes in which to tackle in my book – the themes of The Tempest. I really enjoyed determining how I would portray themes about the nature of storytelling, and the merging of reality and dream, consciousness and unconsciousness.

What do you hope readers get from Storm-Wake?

I really hope that readers enjoy it first of all, and appreciate the different prose styles I’ve played around with! I hope that Storm-Wake may inspire deeper thought about the nature of what makes up story and what makes up life: a merging of the reality and the dream. Perhaps readers may be inspired to think about how they could adapt a text themselves. Perhaps they may also be inspired to consider that the teller of an original story doesn’t have the only story to be told.

Are there any retellings you would recommend, either of The Tempest, or in general?

I adored Jane Smiley’s retelling of King Lear, A Thousand Acres. This novel is set on a thousand-acre farm in Iowa and follows an aging father and his troubled relationships with his three daughters. I also loved Wide Sargasso Sea by Jean Rhys – this is not so much a retelling, but rather a prequel to Charlotte Bronte’s Jane Eyre, focussing on the story of Rochester’s first wife.

Storm-Wake may be a challenging book on first read, but I hope it is one that is ultimately rewarding and enriching. I also hope that readers may enjoy the Shakespearean feel that I’ve tried to imbue into its prose.

Storm-Wake by Lucy Christopher is out now, priced £7.99.

Thank you, Lucy, for such a fantastic interview! It's been a really long time since I read The Tempest - we studied it very briefly in Drama when I was at school - but I am so intrigued by Storm-Wake! Especially by the themes of reality and dream, and the various styles of prose!


This post first appeared on Once Upon A Bookcase, please read the originial post: here
People also like
SALVADOR DALI AND RELIGION
Fiction Series So Big, They Cross Multimedia Platforms: The Witcher Series by Karen Wiesner
10 Best Hotels In Las Vegas
Oct 28th Indigenous and unique hip hop artist Joey Stylez shares video "Thru The Ceiling" - @joeystylezworld
How Ben Franklin Helped Ignite the Jersey Devil Hysteria
Know 7 Most Translated Texts in the World- you’ll be Shocked
Best PS5 Games Deals and Offers with massive discounts
Satisfaction of the Mind Stems From Comparison
20 Best Pools in Las Vegas
What To Watch When You Need A Mood Booster: 10 Shows
Crosswords with Friends October 10 2022 Answers
Iran’s ‘women’s revolution’ could be a Berlin Wall moment