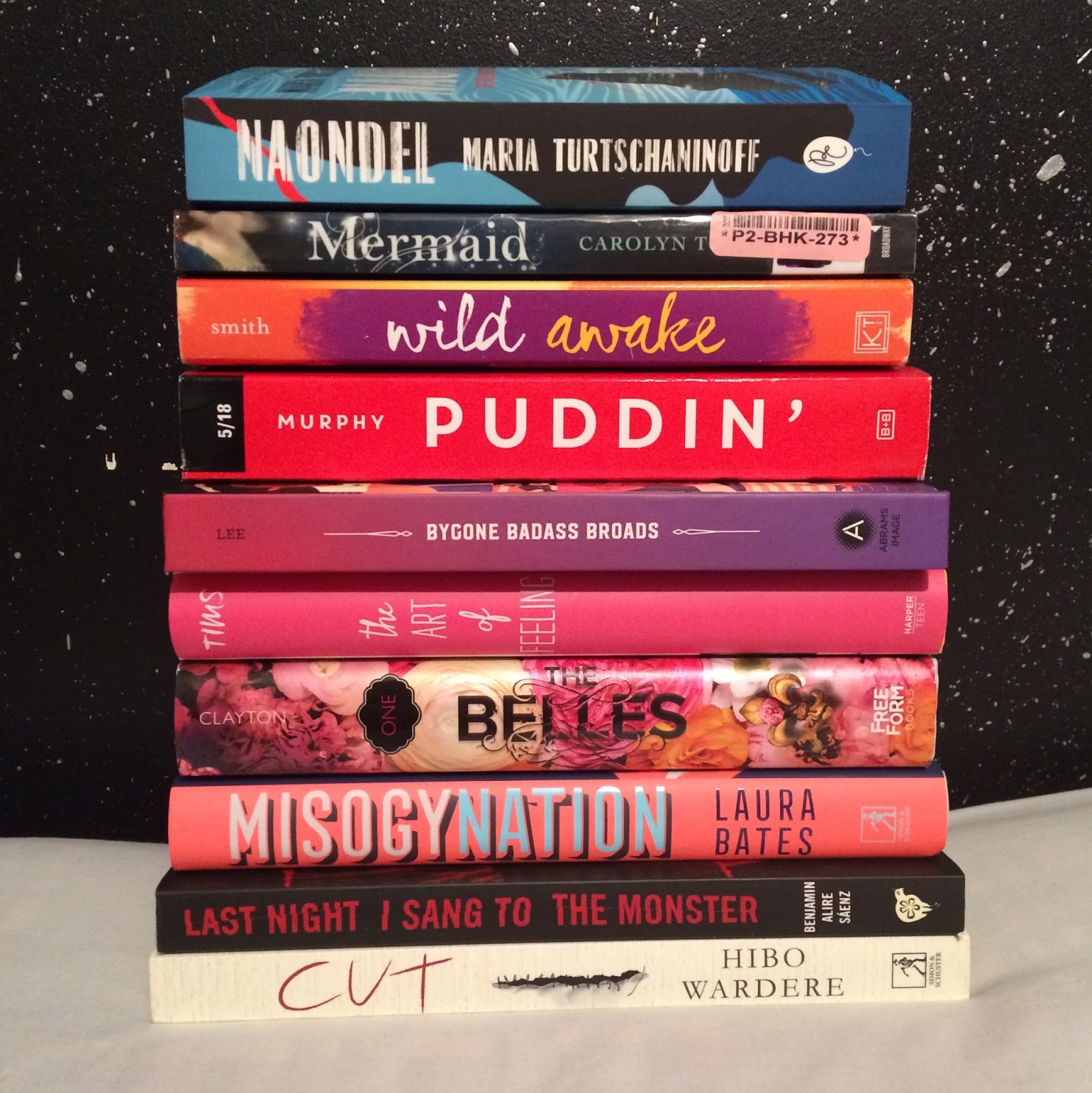 Mermaid by Carolyn Turgeon (1st March 2011)
This sounds incredible! It's dual-narrated by the mermaid, Princess Lenia, and the woman who finds the Prince on the shore, Princess Margrethe. Margrethe is astounded to see a mermaid bring the almost drowned man to shore, but the mermaid has disappeared by the time she gets to him. When Margrethe discovers that the man is a prince, and the son of her father's rival, who her kingdom is at war with, she believes the mermaid brought the prince to her for a reason, and believes a marriage between her and the prince can finally bring about peace. But Lenia longs to be with the prince she saved, and is willing to give up everything to be with him. Aah, how incredible does this sound?! Really looking forward to it, though!

Cut: One Woman's Fight Against FGM in Britain Today by Hibo Wardare (7th April 2016)
Tuesday 6th February was FMG Awareness Day, and was being talked about on Twitter. It's something I know very little about, but it's something I need to learn more about. So on 6th Feb, I was reminded of, and bought, this book, which I'd heard about previously when the author was on a panel with Laura Bates I was meant to attend but couldn't - and in not attending I didn't, and subsequently forgot, to buy. Now I have it, and can educate myself.

Naondel by Maria Turtschaninoff (25th January 2018)
I've bought the paperback of Naondel because my review has been quoted in it! This absolutely never gets old! So happy! See below for a photo of my quote! 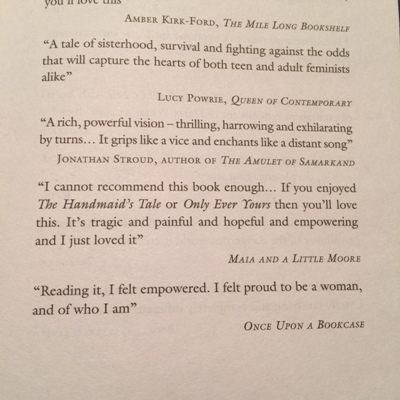 The Belles by Dhonielle Clayton (6th February 2018)
I loved The Belles so much, I had to buy myself a physical copy - I reviewed an eProof (see below). I bought the US hardback, as I think the cover is better (the UK cover looks pixelated?). IT'S SO PRETTY! I love it!

Last Night I Sang to the Monster by Benjamin Alire Sáenz (3rd April 2012)
As you may know, in May, I'm holding Mental Illness in YA Month. Most of the books I had to read, though, featured white people. After asking for some recs, I got a list of YA novels with characters from other identities, and this book features Zach, who, I believe, is Latino, has depression, and is an alcoholic.

The Art of Feeling by Laura Tims (15th August 2017)
I bought this book for the same reasons as Last Night; this story features Samantha, who has chronic pain and depression after being in a car accident. It also a love interest who can't feel pain. I'm really intrigued!

Misogynation: The True Scale of Sexism by Laura Bates (22nd February 2018)
More feminist non-fic by Laura Bates. Enough said. I will buy anything she writes. She's brilliant, and her books always make me think.

Wild Awake by Hilary T. Smith (19th May 2015)
This is a book that was recommended to me for Mental Illness in YA Month, that may feature a protagonist of colour, but it's been a while since they read it. However, it features a protagonist with bipolar, and there don't seem to be too many books featuring bipolar, so I'm looking forward to reading it!

How to Make a Wish by Ashley Herring Blake (2nd May 2017)
This was on sale for £1.99, so I snapped it up! It's one I've wanted to read for a while. Grace wants a normal, stable life, where her bed is in one place for more than three months, and doesn't have to scrounge for change to pay for the bills. Emotionally trapped by by her unrealiable mum, she focuses on her best friend, her upcming audition for a prestigious music school, and surviving her mother's latest boyfriend. But then she meets Eva, who has problems of her own, and midnight adventures ensue. When Eva tells Grace she likes girls, their lives open up. Really looking forward to this one! And it's #OwnVoices!

Catching Jordan by Mirander Kenneally (1st December 2011)
This was on sale, and I got it for nothing! I've always seen Kenneally's books around, and they seem to be highly praised, so as this was free, I thought I would give it a go! I'm not a huge fan of sports, and this series is sports focused, but we'll see!

I Never by Laura Hopper (7th September 2017)
Another eBook that was on sale - for £1.85! I've wanted to read this for a while! It was inspired by Judy Blume's Forever, so I'm excited to see where Hopper takes the story!

Puddin' by Julie Murphy* (8th May 2018)
Aaah, I am so excited for this book! It's a companion novel to Dumplin', which I absolutely loved! Puddin' stars Millie rather than Willowdean, and I really can't wait to read it!

Bygone Badass Broads by Mackenzi Lee (27th February)
I am so looking forward to reading this! There have been quite a number of books to come out over the past year or so celebrating women in history, but they all pretty much talk about the same women. But Bygone Badass Broads covers more lesser known women, so I'm excited to learn about some more fantastic women!

Only Child by Rhiannon Navin (8th March 2018)
An adult book, Only Child follows how a family and a community are affected after a school shooting. Told from the perspective of six-year-old Zach (I believe), we see how his father absents himself, his mother fights for justice, and Zach retreats into books and drawings in his secret hideout. But it's Zach who will ultimately show the grown ups the way forward. I'm really intrigued by this. I've only ever read books on school shootings involving teenagers, so it will be interesting - though undoubtedly heartbreaking - to read a story from the perspective of a young child.

The Girl and the Grove by Eric Smith (8th May 2018)
Leila's life is challenging. She's bee bounced around the foster care system, and lives with seasonal affective disorder. But she is passionate about environmental advocacy, so keeps herself busy monitoring the Urban Ecovist message boards and joining the local environment club with her friend. Finally being adopted, Leila hopes her life will improve. But she can't ignore the voices in her head that are getting louder every day. Something is calling out to her from Fairmount Park. I've never read a book with a character who has seasonal affective disorder, so I'm really looking forward to this! Will be reading it for Mental Illness in YA Month.

The Smoke Thieves by Sally Green (3rd May 2018)
This is a high fantasy novel that sounds so good! At the same time, it's by Sally Green, and I'm not really a fan of her Half Bad series, so I'm a little nervous. Hopefully it will be awesome!

Between the Blade and the Heart by Amanda Hocking (22nd February 2018)
Oooh, this sounds so good! Malin is a Valkyrie, who's job is to return immortals back to the afterlife by slaying them, and the balance of the world rest on a Valkyrie's ability to follow orders. But her world is turned upside down when she discovers her mother spared an immortal who was destined to die. While she's wrestling with the idea her mother may not be who she thought, she meets Asher, who wants her help to kill a rogue immortal who destroyed his family. The balance of the world is at stake, and as Asher and Malin's ex compete for her love, so is her heart. Tgis sounds so exciting! Really looking forward to it!
The Beast's Heart by Leife Shallcross (3rd May 2018)
Aaah, I am SO excited for this book! It's a retelling of Beauty and the Beast, but from the Beast's perspective! How awesome! It sounds incredible, and I'm really looking forward to reading it!

The Poet X by Elizabeth Acevedo (8th March 2018)
An #OwnVoices novel about Xiomara, a girl who learns to use her poetry, which she has always kept to herself, to speak up about what she believes in. I'm intrigued!

Starfish by Akemi Dawn Bowman (5th April 2018)
I've wanted to read this book for so long, so I'm so excited to have been accepted to read the eProof in the lead up to the paperback release! It's about Kiko, who is biracial, half-Japanese and half-white American, and has social anxiety, so I'll be reviewing it for Mental Illness in YA Month.

Brightly Burning by Alexa Donne (1st May 2018 - 2018 YA Debut)
This is a sci-fi retelling of Jane Eyre. It sounds like it might be light sci-fi? I'm hoping so, because high sci-fi isn't really my bag. But I'm really intrigued!
How Do You Like Me Now? by Holly Bourne (14th June 2018)
This is Holly Bourne's debut adult novel. I love most of her YA novels (there are a few I'm still yet to read), so I thought I would give this one a go!

The Wicked Deep by Shea Ernshaw (8th March 2018)
In a town where three sisters were drowned for witchcraft two centuries ago, they return every Summer to take over the bodies of weak-hearted girls, and seek their revenge by luring boys to a death similar to their own. An unsuspecting boy, Bo, arrives, not knowing the danger he's in, mistrust spreads through the town, and people turn against each other. Penny sees what others don't, and must choose - save herself, or save Bo. I want to squeal with excitement over how bloody amazing this book sounds! This has my name written all over it!

I know it looks like I haven't read many books this month, but every other read is for Mental Illness in YA Month, so the reviews are being saved for May.

On Sexual Harassment in the Library/Children's Book Industry:
Cover Reveals:


This post first appeared on Once Upon A Bookcase, please read the originial post: here
People also like
Highest earning apps use Apple Search ads
Man United's American suitors Apollo are accused of financial connections to Putin's wealth fund
Pass the CAPM exam on your first try with a virtual training class from Master of Project
Vehicle Preparedness – Preparing for Comfort