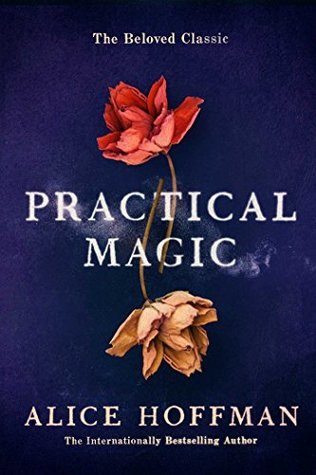 Practical Magic by Alice Hoffman (Bought) - As children, sisters Gillian and Sally were forever outsiders in their small New England town, teased, taunted and shunned for the air of magic that seems to sparkle in the air around them. All Gillian and Sally ever wanted was to get away.

And eventually they do - one marries, the other runs as far from home as she can manage.

Years later, however, tragedy will bring the sisters back together. And they’ll find that no matter what else may happen, they’ll always have each other. An enchanting tale of love, forgiveness and family, Practical Magic is beloved of readers of all ages. From Goodreads.

I really love the movie Practical Magic, but it was only last year when I was on Twitter asking for magical, occult-y recommendations, that I discovered it was actually based on a book by Alice Hoffman. When I saw that the eBook was on sale, I snapped it up. Practical Magic was mostly a great read, but not only was it a lot different than I expected, there are some major, major issues with this book.

Practical Magic is one of those quiet, cozy books that's an absolutely delight to read, with beautiful, enchanting storytelling. But it's not quite as witchy as I was expecting, and not a great deal happens, in the grand scheme of things. It's like the movie took the most interesting aspects of the book, developed them a little, and then wrapped a plot around it. At no point do Gillian and Sally request the help from their female neighbours in a spell, asking them to bring their brooms. Yes, Gillian's boyfriend does die, yes, he is buried in the garden, and yes, strange things do happen because of it. But these are just things that happen. The focus is more on the characters themselves, on who Sally and Gillian grow up to be, the decisions they make, because of the upbringing they had with their strange, eccentric aunts.

Practical Magic has a magical realism feel to it, because all sorts of strange things happen with no real explanation. Like how Kylie, one of Sally's daughters, can see auras,; how the violet plant Sally and Gillian bury her dead, violent and abusive boyfriend, Jimmy, under goes from being not far off dead to full of life and growing taller than any violet plant has ever grown. But this is just life for the Owens sisters. Living with the aunts has brought the strange, and they don't really think about it, it's just strange to the reader. The lack of explanation, just acceptance, adds to the spellbinding quality of the story. It is quite magical.

There are some very real problems I had with this book, as much as I enjoyed the rest of it. There's a lot of love at first sight in this book, though, and a lot of the time, desire and love are one and the same. People are always falling for the Owens girls in ridiculous ways. teenage boys will follow Gillian around like lost puppies. Grown men become practically obsessed. So Gillian fell for Ben pretty much as soon as they started talking, but I don't care how much you're in love with a guy, if you tell him you don't want to see him, don't want him contacting you, you're not going to be happy about the guying calling all the time, or sitting out on your porch until you agree to see him. That's a stalker. That is not attractive, that's really bloody creepy. And all he can think about is wanting to have sex with her. Then there's Gary, the cop who's looking for Jimmy. Again, more love at first sight when Gary and Sally meet. But again, it's love = desire and vice versa, because all the two can think about is having sex. So when they're in a car, and Sally allows things to go further than she would normally, and comes to her senses - because she doesn't do love any more, not since her first husband died, and she doesn't want to become like those women who visited her aunts when she was a child, desperate for love spells they would do anything for - and she stops everything, Gary wants her so much, he thinks how he wishes he was someone who would just take what he wants. "At this moment, Gary wishes he could grab her and force her, at least until she gave in. He'd like to make love to her right here, he'd like to do it all night and not give a damn about anything else, and not listen if she told him no. But he's not that kind of man, and he never will be." (85-86%) Basically, he wants to rape her. He'd like to rape her. He doesn't, but he wants to. And we're supposed to root for Sally and this guy? Are you having a laugh?! These two men who are meant to be the love interests, who are meant to be the ones who show these two women that love can be good (for Gillian), and love doesn't have to end badly (for Sally), are bad men. They are stalkers and wannabe rapists. It's just appalling. Maybe back in 1995 when the book was originally published, people thought this thing was kind of hot? I don't know how though. It's absolutely disgusting.

This is all really upsetting, because I was really enjoying it! But it romanticises stalking and rape - and how it can romaticise rape when Gillian was repeatedly raped by Jimmy, and talks about just how awful it was, then has Gary think like that and it supposed to be a good thing? Is it meant to show the difference between Jimmy and Gary? Jimmy did, but Gary never would? I don't see how that matters when he wants to. It really ruined my whole enjoyment of this book. If Gary never thought that, and if Ben had just take Gillian's no for an answer, and if they just happened to see each other a lot in town and their relationship change that way, rather than him stalking her, this book would have been brilliant. But it's so problematic. And I was thinking about reading Rules of Magic, the prequel to Practical Magic, and excited to, but now I really don't know if I want to, in case it's similarly problematic. I'm pretty disappointed, I have to say.


This post first appeared on Once Upon A Bookcase, please read the originial post: here
People also like
My Biased Repp Sports Raze Energy Drink Review (I’ve Tried Over 10 Flavors)
Why Furries Make Excellent Hackers
What Do Rehab Centres Offer?
Cybersecurity secrets that hackers don’t want you to know in 2021
Carpenter Ants in House
How to Exchange ETH to BTC Without Going Crazy Over It
Music Profile: Crissi Cochrane - Soul Singer Songwriter - Ontario, Canada | SRL Networks London Music PR
“The Friend Who May Not Seem a Friend” – The Cat and the Fire, Post 2 of 3