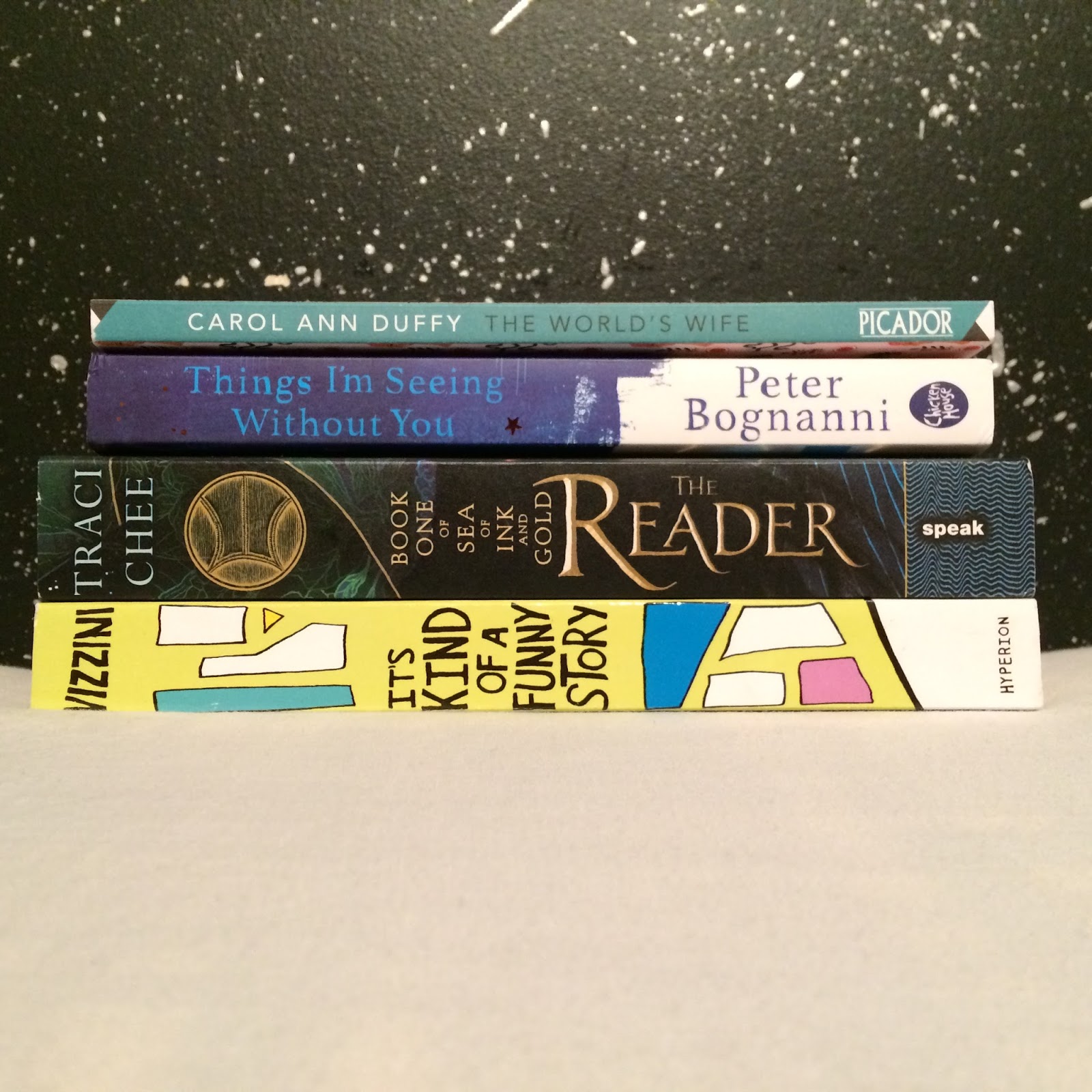 It's Kind of a Funny Story by Ned Viz (ist May 2007)
So excited to read this! About a guy who is in a psychiatric hospital for depression and suicidal thoughts - written by an author who took his own life. Will be reading this for Mental Illness in YA Month.

The Reader by Traci Chee (5th September 2017)
This book sounds so good! Set in a world where reading is banned, Sefia is determined to rescue her aunt Nin, who has been kidnapped, and avenge her father, who was murdered, with the help of a stranger with secrets. She thinks it has something to do witht he rectangular object her father left behind - a book. I am excited! And the cover is beautiful!

The World's Wife by Carol Ann Duffy (1st October 2017)
I bought this after being recommended it by a colleague during a conversation about fairy tale retellings. It's a collection of poems from the perspective of the wives of men from myth and legend, fairy tale, and real life. The beast's wife, Queen Kong, the devil's wife, as well as Mrs. Darwin all get their say in this collection. It sounds awesome!

Practical Magic by Alice Hoffman (19th October 2017)
Until earlier this year, I didn't know the movie Practical Magic, starring Sandra Bullock and Nicole Kidman, was based on a book! I love the movie, and was waiting for the new edition to be published - and then discovered that it's currently in the Boxing Day sales on Kindle for 99p! Really looking forward to reading it.

Things I'm Seeing Without You by Peter Bognanni (1st February 2018)
This is a book about a girl who is struggling with her grief after the boy she loves commits suicide. It sounds like such a good read! I'm going to read it and decide if it will work for Mental Illness in YA Month.

Along the Indigo by Elsie Chapman (20th March 2018)
This sounds like a gritty thriller. About Marsden, who wants a better life for her little sister, and get out of Glory - a town of seedy enterprises where her mum is a prostitute, where she may end up doing the same - and Jude, whose brother commited suicide on the Indigo River. As they get to know each other, they discover a link between Jude's brother's suicide and Mars' family, and other secrets. I'm really intrigued!

More Than We Can Tell by Brigid Kemmerer (6th March 2018)
This is the companion novel to Letters to the Lost, and this time it follows Rev, who was awesome. Rev was abused by his father as a child, but now has a stable life with his adoptive parents - until he receives a letter from his biological father, and the trauma of his past comes rushing back. Emma throws herself into perfecting the computer game she coded to distract herself from her parents' failing marriage, but is having to deal with internet trolls, whose harrassment continues to get worse. When the two meet, they find someone to share their problems with - but their situations only get more dangerous. I love Brigid Kemmerer, and I really enjoyed Letters to the Lost, so I'm really looking forward to this!

The Belles by Dhonielle Clayton (8th February 2018 - 2018 YA Debut)
Aaah, this book sounds so good! I am SO excited to read! About a world where Belles control beauty, and can make people beautiful. Camellia wants to be the favourite Belle of the Queen and work at the Royal Court, but there she discovers there's more to the Belles' powers than they know, and they are far darker. When the Queen asks her to save the ailing princess, Camellia faces the decision of protecting the Belles, or risking her life and changing the world. I am SO eager to read this!

Thank you to Penguin, Chicken House and Amulet Books, Bloomsbury Children's Books, and Gollancz via NetGalley for the review copies.