Review: Nevermore: The Trials of Morrigan Crow by Jessica Townsend 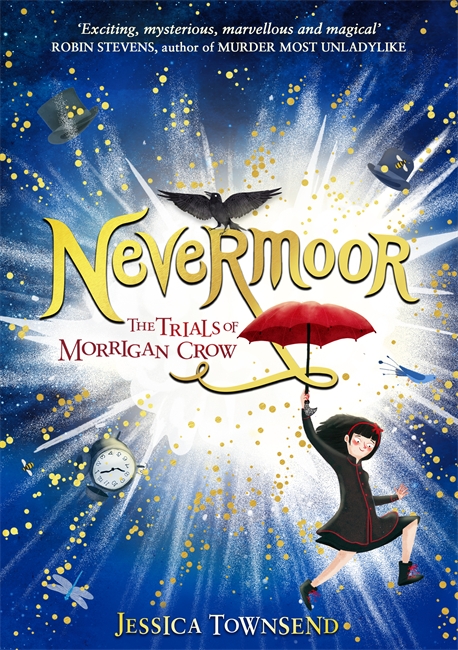 Morrigan Crow is cursed. Having been born on Eventide, the unluckiest day for any child to be born, she's blamed for all local misfortunes, from hailstorms to heart attacks - and, worst of all, the curse means that Morrigan is doomed to die at midnight on her eleventh birthday. But as Morrigan awaits her fate, a strange and remarkable man named Jupiter North appears. Chased by black-smoke hounds and shadowy hunters on horseback, he whisks her away into the safety of a secret, magical city called Nevermoor.

It's then that Morrigan discovers Jupiter has chosen her to contend for a place in the city's most prestigious organisation: the Wundrous Society. In order to join, she must compete in four difficult and dangerous trials against hundreds of other children, each boasting an extraordinary talent that sets them apart - an extraordinary talent that Morrigan insists she does not have. To stay in the safety of Nevermoor for good, Morrigan will need to find a way to pass the tests - or she'll have to leave the city and confront her deadly fate once and for all.

Perfect for fans of the Harry Potter series and His Dark Materials, this series takes readers into an extraordinary world, setting hope and imagination alive. From Goodreads.

Nevermoor: The Trials of Morrigan Crow by Jessica Townsend is just wonderful! It's full of charm, and is just completely magical! I really enjoyed it!

Morrigan as a character is pretty awesome. She believes she is the cause for all the misfortune experienced by the people around her because of her curse, because that's what everyone else believes, and they treat her accordingly. She's not really loved by her family. The opposite to what you expect from fantasy, Morrigan is special, but in a bad way. She's not a hero, she's not the chosen one, she's a girl just trying hard not to cause bad things happening to others. Then she is whisked away to Nevermoor, is told it's all rubbish, she isn't cursed (though she doesn't believe it), and is treated like any other person. Not special at all. She doesn't even have a knack - a special talent that is to be shared in the last of four trials to get into the Wundrous Society, the Show Trial. Although not having a knack is a worry, she revels in how wonderfully normal she is in Nevermoor, and how people like her, are nice to her, and want to be her friend. And Morrigan shows spunk, without being reckless; she's not a frightened little mouse, and she will stand up for herself. She's just great!

However, it's her patron Jupiter North who I loved! Oh, how I adore him! He reminded me very strongly of Doctor Who - not any Doctor in particular, just a possible future regeneration. He's quirky, eccentric, and such an oddball. But also intelligent and wise and very caring. He owns a hotel, the Deucalion, that has magical bedrooms that transform to suit who sleeps in them, and other fantastical rooms that just put me in mind of the Tardis. I have to say I really wish we saw more of him, but he is a very busy Wundrous Society member, and has things to do. I also loved Head of Housekeeping, Fenestra the Magnificat - a giant talking cat who is always in a bad mood, Frank, the vampire dwarf, who is always just a little mischievous, and Dame Chanda, another member of the Wundrous Society, an operatic singer who attracts woodland animals, beautiful and classy and glamourous (who reminded me a lot of Nana from Sing). Nevermoor is full of such fantastic characters, and I loved getting to know them all.

The trials, though, weren't as big a deal as I expected them to be. They weren't quite as "difficult and dangerous" as I was expecting. Although Morrigan herself got worked up about them, they felt quite tame. This is a children's book, though, and I'm sure to younger readers, the trials will leave them sitting on the edge of their seat. But as the trials are in the title of the book, I expected them to last a hell of a lot longer than they did. They were over pretty quickly, and, for me, felt anti-climatic. I just expected more, especially when Morrigan will be kicked out if she doesn't pass them. But I also expected them to be more of an event, whereas they felt like just another chapter. As I've said, the book is full of charm, and I did enjoy reading it, but having finished it, I also think it was a little slow. There are lots of chapters where nothing much of any import to the overall plot happens. Of course, something is always happening, something delightful and captivating, but more often than not, not anything that makes a difference to the story - it's just life in Nevermoor, life at the Deucalion. But as I enjoyed it all, I don't know if it's really a bad thing. It will all definitely wow the younger readers.

The link made to the Harry Potter series is apt but also unfair, I think. I can understand why the link was made, there is something familiar about Nevermoor, and it's quite easy to see the parallels - a miserable child who is treated badly by their family, who is whisked away by a strange man to a magical place where they are accepted - but I do think making the link between any book and Harry Potter can create certain expectations that the reader shouldn't have. Harry Potter is huge, after all, and I think putting that pressure on an author is really unfair. Despite the few similarities, Nevermoor isn't Harry Potter, the story is completely different - Nevermoor is its own story, and one that should stand on its own merits. And it's completely enchanting.

Nevermoor definitely feels like a children's book, but that's not to say it doesn't have crossover appeal. Adults who enjoy reading beautiful and charming children's books will enjoy Nevermoor, too, but it's not a book that feels like it's for all ages. The writing is completely captivating, and I can imagine it being a great book for parents to read to their child; the child being awed by the magical things that are happening, the adult being drawn in by the writing and the wit, and just how lovely it is.

A really enjoyable read, and I'm really looking forward to seeing where the story goes in book two!

Thank you to Orion Children's Books via NetGalley for the eProof.

Review: Nevermore: The Trials of Morrigan Crow by Jessica Townsend