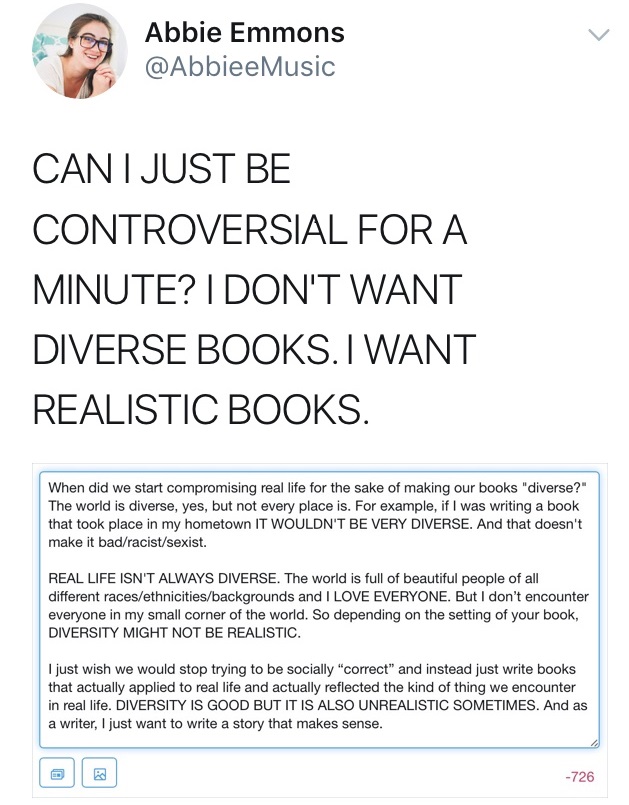 You can click the image to enlarge if you can't quite read the text.
The tweet above by an author was making a lot of people angry yesterday. A lot of people have commented on Twitter about how wrong this author is, but I felt compelled to respond, too.

Let's get to the heart of what this author is really talking about. She has a problem with authors being made to feel they have to write diverse books, but specifically, she has a problem with white authors having to write characters of colour. "The world is full of people of all different races/ethnicities/backgrounds [...] but I don't encounter everyone".

So she is basically saying when she writes a book, when she writes a "realistic" book, she doesn't want to include people of colour, because there aren't any in her town. She may also be saying she won't even think to include any other marginalisations, because she doesn't "see" them. And that a story without people of colour - and maybe other marginalisations - is "a story that makes sense".

Can we just take a moment to absorb that, please? A book that only features white specifically, but also maybe only allo cishet, non-disabled, neurotypical, Christian (and/or athiest) people with no mental illnesses makes sense.

Maybe that's the case. Maybe there are no people of colour. Maybe everyone in her town is exactly the same. Or maybe she's actually erasing those of us from those "invisible" marginalised groups because she doesn't know we're there. In either case, a book where everyone is white/exactly the same is the book she wants to read, the book she wants to write.

Her original tweet has been deleted, so it's difficult to follow the threads of comments that came in response to her tweet, and the conversations she was having. These conversations didn't specify people of colour, but "diverse people" - as in people of any marginalisation. There were conversations about not putting "diverse people" into stories unless they serve the story. As if we're not just people who exist in the world. That there must be a reason for us faulty, other, less-than people to exist. So we don't need to see ourselves in books. We don't need representation. Because books aren't for us anyway. Books are for those white, allo cishet, non-disabled, neurotypical, Christian (and/or atheist) people with no mental illnesses. And they only need to see us in books if we serve the plot. If we're going to provide a teaching moment, or a tool used in the main character's development, or whatever other disgusting reason these people think we would help their books/characters.

Let's just for a moment try - try really bloody hard, but probably fail - to imagine that the thoughts and opinions of this author and all who agreed with her aren't highly offensive. Who would want to read that goddamned book anyway? I mean, can you imagine how boring it would be, where everyone is exactly the same? Can you imagine how boring it would be to live there? Perhaps not for those who have a problem with people who are different from themselves. But surely for this author, right? Because she loves everyone.

I really can't with how screwed up this is. Marginalised people deserve to see ourselves in books, because we exist. We are here. You do not need to force us into your stories because you should, because diversity. If you're writing about a realistic world, we'll be there because we exist. And with the number of people who replied to this author saying how wrong she is, a number of them talked about the small towns they are from/had visited and how there were marginalised people living in them. So we're there. We exist. You just don't see us. You're choosing not to acknowledge us, because our being "different"... what? Makes you uncomfortable?

And, seriously, how many of these "realistic" books, these books that "make sense" are there already in the world? I mean, seriously. What you're really saying is that those few books that feature marginalised characters, specifically people of colour - because it is a few in comparison to all the others with no marginalised characters - weren't here in the first place. Or that us marginalised people should be happy with what we have. What you're saying is that you want us marginalised people to shut up about wanting representation, wanting good representation, and demand you be a better writer.

What you're saying is that us marginalised people don't matter anywhere near as much as you.

To which I say, screw you.