Review: My Life Next Door by Huntley Fitzpatrick 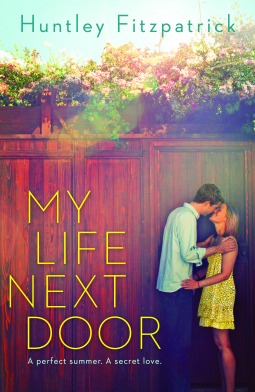 My Life Next Door by Huntley Fitzpatrick (eProof) - A debut about family, friendship, first romance, and how to be true to one person you love without betraying another.

One thing my mother never knew, and would disapprove of most of all, was that I watched the Garretts. All the time.

The Garretts are everything the Reeds are not. Loud, numerous, messy, affectionate. And every day from her balcony perch, seventeen-year-old Samantha Reed wishes she was one of them... until one summer evening, Jase Garrett climbs her terrace and changes everything. As the two fall fiercely in love, Jase's family makes Samantha one of their own. Then in an instant, the bottom drops out of her world and she is suddenly faced with an impossible decision. Which perfect family will save her? Or is it time she saved herself? From Goodreads.

My Life Next Door by Huntley Fitzpatrick sounds like such a great book, but unfortunately, I finished it feeling pretty disappointed.

Samantha has been intrigued by the Garretts ever since they moved next door when she was younger. Loud and boisterous and obviously loving, their family is everything her family is not. Her mum is a clean freak, likes things to be perfect and just so, and has too many rules. She's also rude and judgemental, and doesn't like the Garretts simply because their yard isn't as immaculate as hers, because their children are loud, because Mrs. Garrett breastfeeds in public, and because they keep on having babies. Samantha's mum is also a Senator, and she's currently campaigning to be re-elected, with new guy Clay on the scene to help with her campaign, who she ends up dating. Her mum is so busy with the campaign, she pretty much neglects Samantha, and with Samantha's sister's Tracy away on holiday, things are pretty lonely at home. Until one day, when watching the Garretts from her little perch just outside her bedroom window, Jase Garrett climbs up the trellis and is soon a major part of her life.

So, positives first. The romance between Samantha and Jase was intriguing and sweet before they got together - the whole "will they, won't they?" moments were cute. I loved Jase's family, how big and loud and full of life they are - especially George, a precocious three-year-old who is scared of everything. I loved Tim, Samantha's best friend Nan's twin brother, and his development from a loser junkie to someone who's trying to sort his life out. I loved how Samantha and Nan's relationship ends up kind of rocky after Samantha discovers something. I loved how Samantha's mum obsession with politics and Clay was creating such major distance between her and Samantha. There were so many elements of this book that were so awesome, or had great potential.

But the main plot of the story, of her and Jase' romance? Once they got together, I lost all interest. I didn't feel any chemistry. And he was just so perfect and she was always swooning, and I was constantly rolling my eyes. It just didn't work for me once they got it together. Things started to get interesting once things go horribly wrong, but then I spent the rest of book constantly angry at Samantha for the choices she makes. It was so ridiculous. I would hope no-one would actually act the way she did, no matter what the consequences of the right choices would be. It was just so wrong, and I was so angry!

And then there's the relationship with her mum and how that's disintegrating, as her mum no longer seems to care about anything other than politics and Clay, following everything he says like a puppy. Of course, the reader wants things resolved for Samantha, because the relationship they have now is just terrible. But things would have continued going the way they were if it wasn't for the terrible thing that happened. If that hadn't happened, I don't think anything would have changed. Samantha certainly didn't seem to have the backbone to say anything, to really fight. So that was a let down.

And things with Nan? I was expecting for things to be resolved in some way, but nope. Again with Samantha not having a backbone and not having it out with her best friend when she's being a complete and utter cow. I can, in some ways, see where Nan was coming from, but Nan doesn't really know anything, and the way she treated Samantha was just appalling. And, I think, not entirely realistic. I could believe that she had started to resent Samantha, but they had been friends since they were five, that's a lot of years and a lot of memories. I don't think things would have gone the way they did in real life.

Over all, a pretty disappointing book. I do have the second book in this series, which follows Tim, and considering I loved Tim, I think I'll give it a go. But I'm really worried it's going to be another disappointment. Fingers crossed it won't be.

Thank you to Electric Monkey via NetGalley for the eProof.

Review: My Life Next Door by Huntley Fitzpatrick