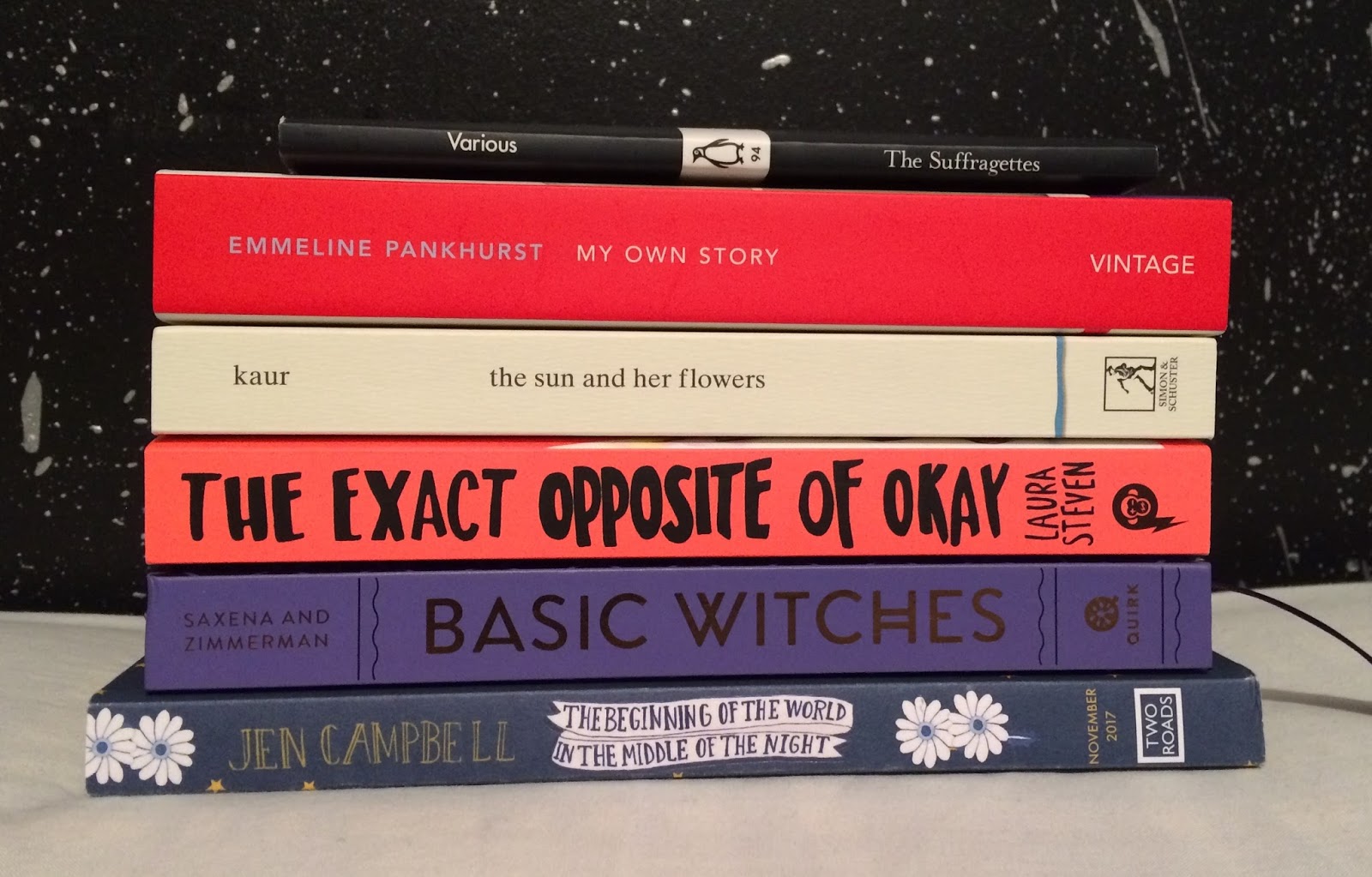 My Own Story by Emmeline Pankhurst (11th December 2014)
I read Things a Bright Girl Can Do by Sally Nicholls this month (see below for review), and although I enjoyed it, it didn't actually have that much about the Suffragettes. Being a feminist, I think it's shameful that I don't actually know very much about what the Suffragettes did, just bits and pieces from The Suffragette movie, so I've decided to educate myself. And what better way than to do so with autobiography of the leader of the Women's Social and Political Union? I'm really looking forward to reading it, though I don't imagine it will be enjoyable, reading exactly what these women suffered for us women to get the vote.

The Suffragettes by Various (3rd March 2016)
Again, another book bought to educated myself in the Suffragettes. This is a Penguin Little Black Classic, and it's "A potted history of the women who pioneered feminism and changed the world," as said on Goodreads. Had a flick through, and it seems to be mostly documents created by the Suffragettes; manifestos and posters, etc. It looks interesting!

The Beginning of the World in the Middle of the Night by Jen Campbell* (2nd November 2017)
A collection of short stories of magic and the fantastic. I believe these short stories are original fairy tales. I'm looking forward to reading it!

The Exact Opposite of Okay by Laura Steven* (8th March 2018 - 2018 UKYA debut)
This book looks to be really interesting. It's a feminist novel that looks at the double standards of sex-shaming, though it's meant to be funny, too. I am intrigued, and ready to get angry.

Basic Witches by Jaya Saxena and Jess Zimmerman (12th September 2017)
So this isn't exactly what I thought it would be. It's less occult and more feminism. More about lifestyle and self-care - but still with spells and rituals. I've started reading some of it, and it's interesting! Looking forward to reading the whole thing.

The Sun and Her Flowers by Rupi Kaur* (3rd October 2017)
Aaah, I am SO looking forward to reading Rupi Kaur's second book of poetry. I've not finished Milk and Honey, simply because I like to dip in and out, and make the gorgeousness last, but I might read it quicker now I have another book to dip in and out of.

Charlie and Me by Mark Lowery (11th January 2018)
This sounds like it's going to be a really moving read. About a boy who is taking his younger brother - who was born far too early - 421 miles to Cornwall, but the real reason why, we're not told. I think this might upset me, possibly.

No Shame by Anne Cassidy (21st September 2017)
This is the sequel to No Virgin, which I'm still yet to read. The first is quite short though, so I could probably get to it quite quickly. This book follows the court case Stacey has to go through, after being raped.

Mick & Michelle by Nina Rossing (31st October 2017)
This is the story of fifteen-year-old Michelle as she comes out to her friends and family as a trans girl, and not the boy Mick they all thought they knew. Really looking forward to reading this.

The Last Namsara by Kristen Ciccarelli (12th October 2017)
Dragon hunting! A YA high fantasy novel that sounds so good! I'm really intrigued, so I'm looking forward to reading it!


This post first appeared on Once Upon A Bookcase, please read the originial post: here
People also like
The Sign of Four
10 of the best rural glamping hideaways in Britain
Proven Methods for Successful Weight Loss
Social Security Disability Insurance: See if You Qualify and How to Find Adequate Help to Get It
“The Friend Who May Not Seem a Friend” – The Cat and the Fire, Post 2 of 3
Globe 5G traffic up 24x in February
My Top Ten Favorite Business Tools for Entrepreneurs