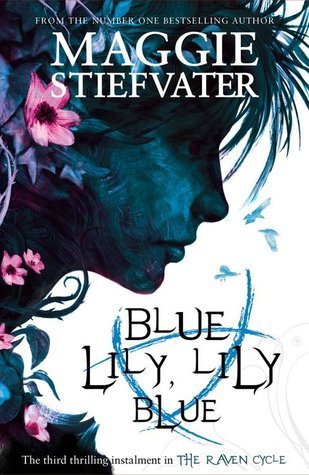 Blue Lily, Lily Blue by Maggie Stiefvater (Bought) - WARNING! I cannot review this book without spoiling the others in the series. Read no further if you're planning on reading this series and don't want it spoilt for you.

The trick with found things, though, is how easily they can be lost.

Friends can betray.
Mothers can disappear.
Visions can mislead.
Certainties can unravel. From Goodreads.

Blue Lily, Lily Blue by Maggie Stiefvater is probably the most exciting book in The Raven Cycle, and a fair few things happen. However, I'm starting to feel like by the time I reach the end of this series, I'm going to be disappointed.

I really enjoyed Blue Lily, Lily Blue. I still love all the characters, who are the reason I read this series, but when it comes to the plot, I'm starting to get a little frustrated. It's fair to say things do move on quite a bit in this book - Maura goes missing when trying to look for Blue's father, Mallory comes over to help Gansey with the ley line and he's awesome, we meet Jesse Dittley who I just loved, things happen in caves, and those things lead on to other things - especially when compared to The Dream Thieves, but I'm really starting to feel like things aren't happening fast enough. Sure, there's only one book left, and everything will be wrapped up in this one, but this is the third book, and in the great scheme of things, not a huge deal has happened. Adam woke the ley line in the first book, Ronan got better at taking things from him dreams in the second, in this things are discovered in caves. I could summaries this third book a little better, but spoilers. But that's pretty much it. I mean, come on.

As I said, I love the characters, I am gripped by this series, and the stakes are seriously raised in Blue Lily, Lily Blue - and that cliffhanger! - but looking back over the series, I am feeling kind of disappointed. It's fortunate that I've started reading the series after the whole series had been published, but I would be pretty annoyed if I had read each book as it was released, and had to wait for the next. The series ends with the next book, and I don't feel like enough has happened. I am still really intrigued by the whole story, and I want to know the out come in regards to Glendower - I find the fact that this is based on real folklore awesome, and the folklore itself so fascinating - but I have read better series when it comes to plot and what actually happens in each of the books overall.

Blue Lily, Lily Blue has definitely got better, it's built on the last two, and things are finally happening, but I'm still left wanting. I'm left wanting because there is only one book left, and I don't feel this series has truly got moving yet. I almost feel like both The Dream Thieves and Blue Lily, Lily Blue could have been shorter and made into one book. And then, maybe, the pace would feel better. But I would still want another two books after. Seriously, I need more. This book is awesome - really, it's so good! But looking at the series so far as a whole, I'm really frustrated and disappointed. I'm really looking forward to the final book, The Raven King, but at the same time, I really worried that I'm going to be disappointed. I'm really expecting a lot from this final book, and if it fails to deliver, I'm not going to be pleased.


This post first appeared on Once Upon A Bookcase, please read the originial post: here
People also like
The Sign of Four
10 of the best rural glamping hideaways in Britain
Modern Venice Architecture
Social Security Disability Insurance: See if You Qualify and How to Find Adequate Help to Get It
Cabbage Production Guide
“The Friend Who May Not Seem a Friend” – The Cat and the Fire, Post 2 of 3
Music Profile: Elliott Waits For No One - Alternative Rock Band - Illinois, Usa | SRL Networks London Music PR