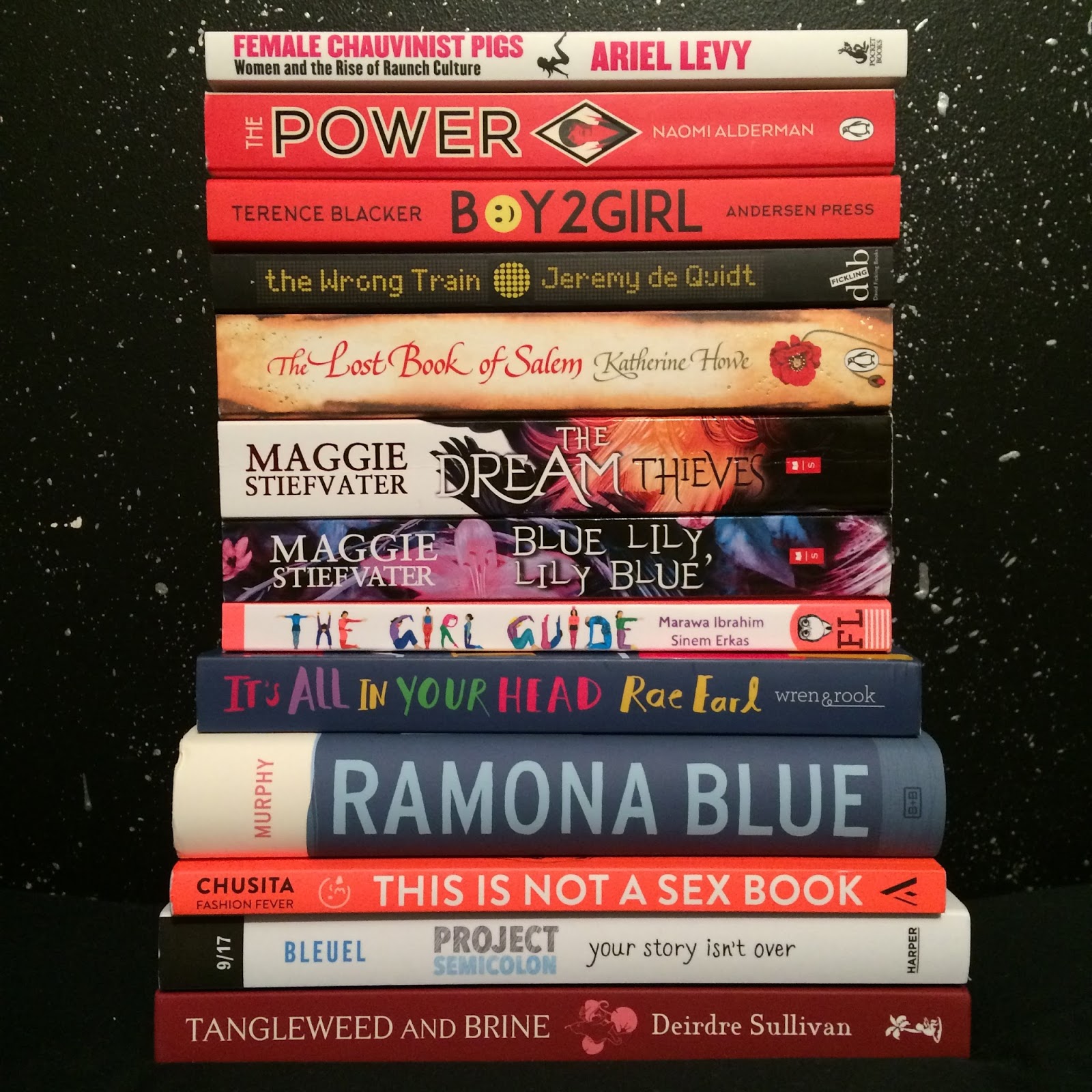 Female Chauvinist Pigs by Ariel Levy (3rd OCtober 2006)
I've wanted to read this book for quite a while now, and although it was interesting, it was a little disappointing (see review below). Looks into raunch culture, and how it's actually sexist rather than liberation.

The Lost Book of Salem by Katherine Howe (9th June 2009)
I bought this in a charity shop for £1.49, and it's in such good condition! It sounds so interesting; a family curse, and a link to the Salem witch trials! I'm really excited to read it!

The Power by Naomi Alderman (6th April 2017)
I don't read much in the way of general fiction, but this one sounds like it's quite a feminist story. Teenage girls discover they have a the power to cause pain or even death with the flick of a hand, and it's about how this affects the four central characters. Sounds so good!

Project Semicolon: Your Story Isn't Over by Amy Bleuel (5th September 2017)
Created by the woman behind Project Semicolon - to help people with mental illness carry on when suicidal - this book shares the stories of people with mental illnesses, and how they kept going. I think this is going to be very powerful, though bittersweet, knowing Bleuel lost her battle with depression earlier this year.

Ramona Blue by Julie Murphy (9th August 2017)
I am so happy to have this! I've been wanting to read this ever since I first heard about it. Not only is it by Julie Murphy, but it's also a book that looks at the fluidity of sexuality. Up until now, Ramona has been into girls, but with the return of her childhood friend, Freddie, and her growing feelings for him, she begins to question her sexuality.

Tangleweed and Brine by Deirdre Sullivan* (7th September 2017)
Ok, so I know I included this in last month's recap, but the rep who sent me the manuscript came into my bookshop with a finished hardcover copy for me! It was such a surprise, I wasn't expecting a physical copy as I was sent a manuscript. And it's beautiful! I'm so looking forward to reading it!

Boy2Girl by Terence Blacker (5th October 2017)
I am really intrigued by this! Though I'm also nervous about how the topic will be dealt with, but if done well, I think this could be really interesting!

The Wrong Train by Jeremey de Quidt (7th September 2017)
This was unsolicited, but sounds pretty good, if you're in to horror. A collection of short scary stories. I'm not big on horror, so I'm not sure if I'll read this one.

It's All In Your Head: A Guide to Getting Your Sh*t Together by Rae Earl (10th August 2017)
This is a non-fic book about mental illness for teens by an author who has a mental illness. As someone with a mental illness, I'm really looking forward to reading this.

This Is Not a Sex Book by Chusita Fashion Fever (13th July 2017)
So really, this pretty much is a sex book. Written by Youtuber Chusita Fashion Fever, it's a book for teens that talks about sexuality, sexual orientation, kissing, sex, and more, with real honesty. Seriously, I flicked through this book and was amazed at the topics it covers. It also has illustrations and little comic sections to illustrate certain situations. I think it's going to be incredible, and I'm looking forward to reading it.

The Girl Guide by Marawa Ibrahim (1st June 2017)
This is an honest book about growing up and puberty for girls from world breaking hula-hooper and circus performer, Marawa Ibrahim. Another one that deals with topics in such honesty, and normalising issues. I think this is going to be awesome.

36 Questions That Changed My Mind About You by Vicki Grant (19th OCtober 2017)
This sounds so intriguing! Two teens take part in an experiment to see if they can fall in love by asking each other 36 questions.

Rules of Rain by Leah Scheier (5th December 2017)
This one sounds intriguing, but I'm also a little wary. About the relationship between Rain and her twin brother Ethan, who has Autism. She's always cared for Ethan, but now she's finding he doesn't need her as much, and after making a mistake, she realises that this time she needs him.


This post first appeared on Once Upon A Bookcase, please read the originial post: here
People also like
Predicting Roulette
Best Things to Do in Cadaques, Beautiful Town in Costa Brava
8 Signs You Should Avoid That Potential Employer
Break Da Bank Again Megaways Slot Review (Microgaming)
Easy Pet Rocks Craft Idea For Kids
The Sign of Four
Flooring Design for Modern Homes
10 of the best rural glamping hideaways in Britain