Review: Because You Love to Hate Me: 13 Tales of Villainy anthology, edited by Ameriie 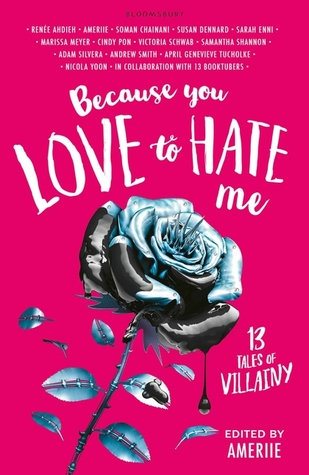 Because You Love to Hate Me: 13 Tales of Villainy anthology, edited by Ameriie (Review Copy) - Leave it to the heroes to save the world--villains just want to rule the world.

In this unique YA anthology, thirteen acclaimed, bestselling authors team up with thirteen influential BookTubers to reimagine fairy tales from the oft-misunderstood villains' points of view.

These fractured, unconventional spins on classics like "Medusa," Sherlock Holmes, and "Jack and the Beanstalk" provide a behind-the-curtain look at villains' acts of vengeance, defiance, and rage--and the pain, heartbreak, and sorrow that spurned them on. No fairy tale will ever seem quite the same again! From Goodreads.

Trigger Warning: A character is raped off the page in Beautiful Venom.

I'd been wanting to read the Because You Love to Hate Me anthology, edited by Ameriie ever since I first heard about it. Retellings that put villains at front centre? What's not to love? However, I finished feeling a little disappointed.

All I'd heard about Because You Love to Hate Me is in the summary above. It specifically said that these stories are reimagining fairy tales, but that is not always the case. Five of these thirteen stories are original stories. Possibly even six, as one story's only link to a previously known story is in the challenge, but it's not recognisable as a retelling. Really, only three of the stories included are based on fairy tales, though there are others based on classics, mythology, and folktales, which is fine by me. But the whole reason I wanted to read this book was because it was going to be retellings of fairy tales - or other known stories - from the villain's perspective with a twist, or origin stories, or what have you. This is what I was expecting. The challenges from the Booktubers for the authors are revealed after each story, which was good, because, in some cases, they would be spoilers, but when you read the first story, and struggle to work out what the original story it's based on is, to then find out it's not based on anything, it's a disappointment. And to have that for a number of stories, I was annoyed. That's not to say that the stories were bad, just that it's not what I was expecting. I have no interest in villains in general, it was the fact that these are villains we already know that had me wanting to read this book. To be fair to the book, though, the blurb does say that there are also original stories in this anthology, but I'm not reading the blurb when I already know what the book is, right? Maybe I should from now on.

That aside, I enjoyed most of the stories. There were a few that really stuck out for me. The Sea Witch by Marissa Meyer is an origin story of the Sea Witch from The Little Mermaid, and was so, so good! But I love The Little Mermaid, and I love Marissa Meyer, so this was pretty much a perfect fit for me. I also really loved Beautiful Venom by Cindy Pon, a retelling of the story of Medusa. I never knew how Medusa became Medusa in any great detail, so the story was a great surprise to me, but also one I feel is really important. It looks into rape culture and victim blaming, and was so powerful. Pon also took this Greek myth and set it in East Asia - presumably China. This is also the only story in the anthology with POC characters. Marigold by Samantha Shannon was brilliant, a really feminist - and probably more realistic - look at a story set in the 19th Century, involving the Erl Queen. I also really enjoyed the original stories The Blessing of Little Wants by Sarah Enni and Sera by Nicola Yoon, which I'm not going to say anything about, because of spoilers.But to be honest, a lot of the other stories left so little impact that I have the book with me as I write this review because I simply couldn't remember them.

I liked the premise of this anthology, that Booktubers would challenge authors to write about villains in a specific way, and I was interested in what they themselves would have to say. At first, I thought it was going to be them also writing a story based on the challenge, but most of the time, it was more about them looking at the subject of villains, or specific villains, referencing the story their author wrote. Some of them were interesting; I like what Benjamin Alderson (Benjaminoftomes) had to say on rape culture and victim blaming in Without the Evil in the World, How Do We See the Good? And I loved how Steph Sinclair and Kat Kennedy (Cuddlebuggery)'s The Bad Girl's Guide to Villainy, although focusing on villains and being kind of jokey, was so feminist; a lot of the advice they five to would-be villainesses is advice girls and women should take simply to have a voice in this patriarchal world - to take up space, not do as you're told, go our and get what you want. It was fantastic! But overall, I didn't think the pieces from the Booktubers added much, and at worst, I felt some of them were written as if they were writing to young people - not that they were dumbed down, just that they had a specific age group in mind, and to me some felt a little patronising. Apart from the two mentioned above, the pieces from the Booktubers didn't work, in my opinion, for this book. The ones that weren't patronising would have been interesting if discussed in greater length in blog posts, or, as they are Booktubers, videos. But I didn't really enjoy them as part of this book. Saying that, that are people who are fans of these Booktubers who will buy it for them as well as for the authors/villain stories, and so will probably enjoy this element of the book more than I did, who was interested in the book only for the retellings.

So mixed feelings overall. Because You Loved to Hate Me wasn't what I expected. I'm sure there are a lot of people who would love it, but for me, I would have preferred more stories instead of the commentary from the Booktubers, and stories with a bit more impact.

Thank you to Bloomsbury Children's Books for the review copy.

Review: Because You Love to Hate Me: 13 Tales of Villainy anthology, edited by Ameriie