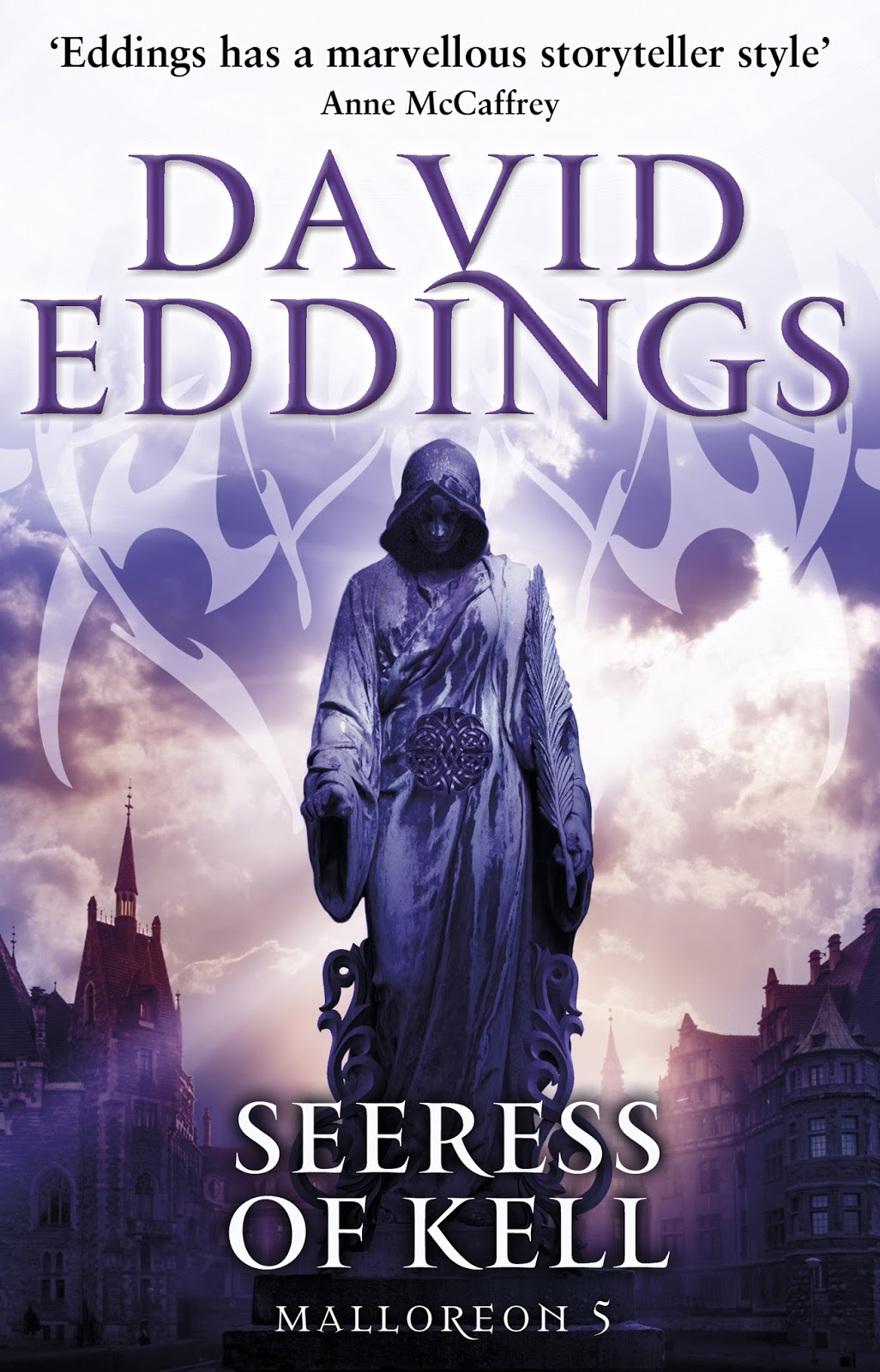 Seeress of Kell by David Eddings (Borrowed) - WARNING! I cannot review this book without spoiling the others in the series. Read no further if you're planning on reading this series and don't want it spoilt for you.

Now in the final stages of their quest for his son, Garion and his companions travel to Kell to consult the only undamaged copy of the Malloreon Gospels. For centuries the Seers have guarded this book from the Grolims and even had their wizards put a curse of blindness on any Grolim who tried to enter Kell.

So, as proclaimed in Guardians of the West, Belgarion the Godslayer sets out with those who must join him: the Eternal Man, the Guide, the Man with Two Lives, the Bearer of the Orb and the Silent Man, and the rest of his companions to The Place Which Is No More to make the final choice - darkness or light.

But Zandramas the Sorceress will not be outdone. Though she may not enter Kell she still has young Geran and should she reach the final meeting place with him, then Garion must slay his son or the world will be no more. From Goodreads.

Seeress of Kell by David Eddings is the final book in the Malloreon series, and as excited for it and the final meeting between the Child of Light and the Child of Dark, I felt the ending was kind of anti-climatic.

This time round, I found it fairly odd how the book finished. The meeting between the Child of Light and the Child of Dark took several chapters, which I wasn't expecting; there were various parts of that meeting at the Place Which is No More that I had forgotten. As interesting as it all was, I was eager to get to the end of the meeting when Cyradis' Choice would be made, but then I felt a little let down, as I felt it was anti-climatic. This is down to myself than the book failing; as I've said, I've read these books before, and I had built up this final meeting a lot more in my head, so when it got down to it, it wasn't as huge as I was expecting. I think, although I couldn't remember much of it, what I was most excited about, about the final meeting were the events that led up to the choice. I should have perhaps enjoyed them more than I did in my eagerness for the story to continue.

And then there was about a hundred pages that followed the final meeting, and I was kind of baffled as to where the story would go then. As this is the final book starring Garion and his companions, the ending wraps up everyone's storylines, and we get to see, for a short while, where their lives head after the meeting. Even so, Seeress of Kell is an exciting book, and a satisfying end to the series.

There are two things I need to mention. The first is in regard to race. Except for Riva, Cherek, Algaria and Drasnia, which are Alorn countries, and Cthol Mishrak, Mishrak ak Thull, and Gar og Nadrak, which are Angarak countries, and Mallorea which is a bit of a melting pot, all countries are home to their own race. That is how they are described. And although there are some physical differences between them - size, cheekbones, hair colour, etc. - the main differences are in personalities. What I'm getting at here is that there seem to be no people of colour in this world. I've waited to mention it until the last book, as I was hoping as the story continued there might be further description of the different races, so I could be more sure before I said anything, but it seems to me that everyone is white. Which is not only unrealistic, but also not ok. To be certain, I would need to read the Belgariad again, as there would be more descriptions of the characters as Garion meets other races for the first time, but I'm pretty sure everyone is white. Which is really disappointing and harmful.

The second thing I want to discuss are the relationships that develop over this series. I won't give any spoilers in regards to which characters I'm discussing, but there are a number of instances where young women - in their mid to late teens - fall for much older men. Granted, most of the men in question are quite powerful in one way or another, but that's not what these women are attracted to; they are genuinely in love with these men, and the men end up genuinely returning their affections. Of course, this does happen in real life, it's not exactly unrealistic. What has me raising an eyebrow though is that it happens with every single relationship that is developed in this series. Each one involves a female teenager and a man approaching or in his 50s. Each one. If it was the odd relationship, I probably wouldn't have even noticed, but as it's every single one, with no-one, man or woman, falling in love with someone around their own age, it smacked of wish fulfilment for Eddings, who was 55-60 when this series was originally published. It just felt a little odd to me, all these teenagers falling for middle-aged men. I don't know, I guess it didn't feel quite as realistic when it's every single relationship.

Anyway, a great end to the series, though a problematic one. Though I'm sad there will are no more books featuring Garion and his friends. However, I do look forward to reading Belgarath the Sorcerer and Polgara the Sorceress at some point - the prequel "autobiographies" the two write about their lives from infancy to the beginning of the Belgariad, where get to see all the events from history that are discussed first hand.


This post first appeared on Once Upon A Bookcase, please read the originial post: here
People also like
Vehicle Preparedness – Preparing for Comfort
Under Over Fest: Etain And Friends Bring Cannabis Education To Upstate New York's Best Indie Music Festival
Rossby Waves Affect Our Weather and Tides, But What Are They?
Kim Kardashian’s Boyfriend, Pete Davidson Reveals His Greatest Desire