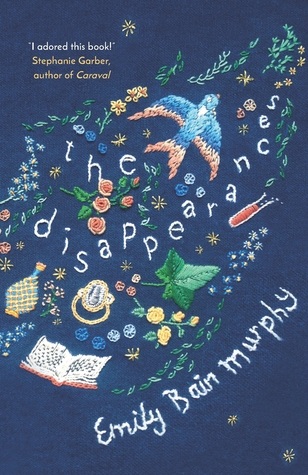 The Disappearances by Emily Bain Murphy (eProof/review copy)* - Every seven years something goes missing in the remote town of Sterling: people's reflections, the stars in the sky, the ability to dream. Aila realises that her mother may be to blame for the curse. But some mysteries are buried very deep and some secrets want to stay hidden - and one young woman's desire to uncover the truth may not be enough to save Sterling from the past.

A beautifully told story of love, loss and finding the truth - no matter how difficult that might be. From Goodreads.

The Disappearances by Emily Bain Murphy sounded amazing. It had such an incredible premise, and it showed so much promise, but it fell flat for me right at the end.

It's 1942, and three weeks after their mother dies, Aila and Miles' father has to go to war. As there's no-one to look after them, they go to Sterling with Mrs Cliffton, their mother's childhood best friend, and her husband Dr Cliffton.  Sterling is a small quiet, town no different from any other - except that something will go missing every seven years. It started 35 years ago, and the people of Sterling have lost scents, the stars, their reflections, and their dreams. Aila and Miles aren't made to feel welcome in Sterling, as some believe it was their mother who caused the Disappearances; they started when she was born, and when she left Sterling, she got everything back, while other members of Sterling never did. And with another Disappearances due this year, the people of Sterling are worried, even more so now that Aila and Miles are here. Desperate to clear her mother's name, Aila tries to find out all she can about the Disappearances; what causes them, and how to stop them. But the past is full of secrets, and curses can be more intricate than she ever imagined.

Doesn't that sound just so exciting?! I was so eager for this to be amazing and blow my mind! The Disappearances is one of those quiet, calm stories, and normally I enjoy that kind of story, but it took a while to really get going, for Aila to have a theory that looked like it might lead somewhere. But once it did, oh my god, it was so good! It was so clever and so complicated, but so intriguing and fascinating. Murphy really know her stuff, and I was just so impressed and so eager for the truth.

And then there's the mysterious Stefen. For the most part, the story is narrated by Aila, but every now and then there would be a chapter from Stefen, coming more often as the story goes on. He, also, used to know Aila's mother. When we meet him, he's about to commit suicide by jumping in front of a train. At the last minute, he changes his mind, and decides to go and meet his father, Phineas. He's never met him before due to being in prison for grave robbery, and never coming back for Stefan when he got out. Stefan has a troubled past; he caught influenza when he was young, and it really affected him. He was left in a wheelchair for a long time, unable to do most things like children his age, like go to school. His legs are stronger now, and he can walk, but he still struggles. There's also the fact that he and Juliet, Aila and Miles' mother, fell out a long time ago, and there was someone from his past that he was in love with. He too is affected by the Disappearances, and is jealous of Dr Cliffton for discovering the Variants, something he believes he should have got some credit for. But he has a plan of his own. I was so intrigued by him! Who is Stefan? How did he know Juliet? Is he somehow linked to it all? And his own plan. It's all so intriguing, but he's also kind of sinister. Even so, I really enjoyed his chapters.

The problem is, there were too many questions without answers. Firstly, Dr Cliffton is a scientist who discovered Variants, things which will bring back the lost things temporarily for the user of the Variants. He's discovered Variants for reflections and for scents, but not for the stars or for dreams. But in his experiments, he's discovered other Variants, and so has a doctor in a sister town - because it's three towns that are affected by the curse, not just Sterling - so there are now Variants that will create warmth, Variants that will keep the rain off you, and so on. But there's no explanation as to how they work, or why they work. As the story goes on, we learn more about specific Variants, what's in them, and the link there is to literature, how sometimes they can point out things that Dr Cliffton has tried and has worked. So we know literature, in some way, is involved, and although we don't get told why or how the Variants work, I assumed it was part of the overall mystery of the curse, and when the truth finally came out, it would be explained. No. I mean, I've finished the book, and so I know what the curse was about, but it doesn't explain why, for example, crushed Blessed Thistle can bring back scents. I don't accept that it works because an author wrote about it. It gets difficult for me to discuss my problems with this without spoiling the story, but basically, so what? So what if this person wrote about it? Why does that make it work? And how does it work? I know you sprinkle it on flowers or food, and voila smell, but how does it actually bring back scents? There were no answers.

And the ending was just the biggest disappointment of all. I was getting so close to the end, and still no answers, and so I was sure this would end on a cliffhanger and there would be a second book. But no. The ending is convenient, and really, just ridiculous. It just all happened too quickly, and there are still so many unanswered questions. There are so many holes! I know about the curse, but there are still so many how's and why's! That whole ending could have been taken and developed a whole lot more. It was far too easy. It was ridiculously easy. I feel cheated. It should never have been that easy, they never would have worked it out without something conveniently happening. They would have no idea. And there's never any proof about their theories anyway. There is so much conjecture about what's going on without any real proof that this is the case. Aila and her group of friends just decide this must be it because it all seems to work out, but they don't know for sure, and they just go along with it, and yes, they're right.

When Shakespeare's works were brought in, and everything that was happening to Sterling and it's sister towns could be found in his plays and sonnets, it was amazing. It was so intricate! And then Shakespeare's missing seven years, and the quote on his gravestone. But it just came about so conveniently. Stefen gives Aila the map from his father, Aila and friends find links to the Helena Stone in Shakespeare's works, and find the quote on the gravestone about the curse, and that's enough for them to solve everything. It just wasn't enough. Why did Shakespeare curse his grave? How does the curse work? And why did the curse specifically affect people by losing certain things? "He linked it to his work!" they say, but how? And oooh, the map leads to places where Shakespeare's bones are, so we'll just dig them up and bury them all together, and everything will be fine! No! Too easy! And why would Phineas have made a map of where he buried the bones anyway? Why would he care where he buried them? He didn't know what was going to happen, he was just burying them to get rid of them. The locations of those bones should have been more difficult to find. There shouldn't have been a map. Too bloody convenient.

(And also, on a side note, how on earth did Stefen make his so called virtues? Seriously, what does he do? How does he make the mice fell peace, and how does he extract it? What is he actually doing? These are never answered!)

It should have been harder to work out, harder to fix, and more questions should have been answered. This is fantasy - historical fantasy, yes, but still fantasy. None of this happens in real life, so you've got to make it believable. And to make it believable, you've got to work on the world building. You've got to answer all questions and have things make sense. It's got to be believable! That whole ending could have been worked on and made into a second book. I finished the book in complete disbelief, and quite angry really. It was a shoddy ending, and I'm so disappointed and so annoyed.

The Disappearances had so much promise! It was doing so well! I really can't believe Murphy got away with that ending really. I feel ripped off. I really don't know if I'll read anything by Murphy again, because although the book completely had be gripped and seemed so clever, with no answers and an easy, convenient ending, I just can't see why it would be worth my time.

*I requested The Disappearances on NetGalley a while back, and was then offered the opportunity to review the UK edition a couple of weeks ago. I accepted, not realising they were the same book until later. Hence the two covers and mentioning that I have an eProof and a review copy.

Thank you to HMH Books for Young Readers via NetGalley for the eProof, and thank you to Pushkin Children's Books for the review copy.


This post first appeared on Once Upon A Bookcase, please read the originial post: here
People also like
The Sign of Four
10 of the best rural glamping hideaways in Britain
Proven Methods for Successful Weight Loss
Social Security Disability Insurance: See if You Qualify and How to Find Adequate Help to Get It
“The Friend Who May Not Seem a Friend” – The Cat and the Fire, Post 2 of 3
Short Happiness Quotes From Famous and Unknown People