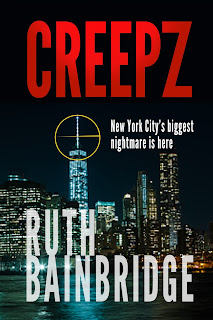 Creepz
by Ruth Bainbridge
~~~~~~~~~~~~~
GENRE: Suspense Thriller
~~~~~~~~~~~~~
BLURB:
June 2017. New York is suffering under the worst heatwave in centuries, but it’s the barrage of grisly murders that has city dwellers on edge. Since the homicides don’t fit a pattern, the NYPD is treating them as unrelated, but Detective Grace Jarrod isn’t so sure. Graffiti left at the crime scenes points to the crimes being linked and part of a rampage.

Bárbara y Mechita la pareja lésbica d…
Sexy Games for Married Couples
Spider-Man: If This Be My Destiny - L…
Remote Learning Resources for the Fir…
4 Things You Should Know Before You M…
The delivery of a cryptogram to her precinct proves her theory correct. A group calling themselves CREEPZ takes credit for the deaths and for the war they wage. They promise not to stop until a societal revolution is achieved. Jarrod leads the investigation and goes after the madmen that strike at will and profess to kill for love. Little does she know that the group of homeless drifters is led by a genius who believes himself God.
~~~~~~~~~~~~~
Excerpt :
PROLOGUE
“It’s the things right under your nose—
the things you don’t notice
—that get you killed.”
—  Detective Grace Jarrod, NYPD
The express train thundered down the subway tracks, speeding past the commuters huddled on the platform. The breeze broke the solid wall of heat, giving the crowd on the underground platform some relief from the steam bath they were caught up in.
A sigh rippled through the human herd as they edged away from the mechanical beast clearing the station. When the last car was swallowed up by the darkness of the tunnel, they eased back into position and anticipated the arrival of a local that would stop at the 72nd Street station.
In the commuters’ minds, getting home took precedence over everything, even the colorful graffiti spray painted on the tiled wall. If only they’d divined the signs right before their eyes, they could have prevented a war.
.
~~~~~~~~~~~~~
AUTHOR Info:
Ruth Bainbridge was born in the idyllic, sleepy town of Ithaca, NY, and has been a lover of mysteries for her entire life. Ever since a child, she’s consumed detective stories at regular intervals, becoming enamored with all the superstars of crime. She loved matching wits with Hercule Poirot, Miss Marple, Thomas Pitt, Lord Peter Wimsey, Richard Jury and Edward X Delaney. In fact, she was so inspired by their brilliance that she began trying to emulate her writing idol's achievements by composing her own short stories. However, life interfered with her plans of becoming the next hopeful to try a life of crime--on paper at least. But the empty nest syndrome happened and gave her the impetus to return to her first love--murder.
Her works include: THE CURT SAVAGE MYSTERIES (a four-part series that should be read in order); DEADSPEAK, a detective Twin Peaks; and ONLY ONE WILL FALL, the first in THE NICK CROSS MYSTERIES. CREEPZ is her eighth published work. The most intense read of the season, it’s a complex adrenaline rush that’s filled with suspense.
Facebook: https://www.facebook.com/RuthBainbridgeMysteries/
Newsletter: http://tinyurl.com/ruthbainbridgenewsletter-com
Twitter: @Ruth_Mysteries
Website: http://ruthbainbridgemysteries.blogspot.com
BUY LINK:
Amazon:
Creepz
~~~~~~~~~~~~~
GIVEAWAY
Ruth will be awarding a $10 Amazon or B/N GC to a Randomly Drawn winner via rafflecopter during the tour and, (US/CANADA ONLY) Ruth is hosting an EXTRA CONTEST. The prizes are a Kindle Fire HD8 and (5) $10 gift certificates. It's a CRYPTOGRAM CONTEST and all winners will be randomly drawn via rafflecopter.
a Rafflecopter giveaway