HOW TO SPOT DEAD OR LIFELESS CHARACTERS, PLOTS, AND RELATIONSHIPS (CPR), Part 3

Based on CPR FOR DEAD OR LIFELESS FICTION {A Writer's Guide to Deep and Multifaceted Development and Progression of Characters, Plot, and Relationships} by Karen S. Wiesner 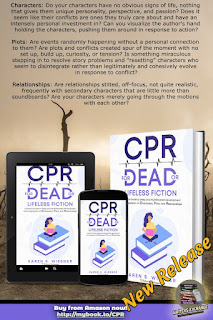 This is the final of three posts focusing on how to spot dead or lifeless characters, plots, and relationships in your fiction

A lack of development and progress in character, plot, and relationship is something that can be seen throughout an entire book and sometimes the whole of a series. James Scott Bell advises asking yourself, "Who cares?" and "What's the purpose?" to ensure validity and clarification of the reason for each scene even existing. I'd add for clarification that characters, plots, and relationships all need to have a reason for existing. If readers are never engaged on even one count of core elements, what's the purpose of the book existing and, honestly, who cares if it gets read? If there isn't passion burning inside all three of the core elements, bursting out so the story has to be told, there is quite literally no point to starting, continuing or finishing. For anyone.

Development of all three elements is crucial and progression has to be evident from one scene to the next. If something is actually happening in a story with all three of the CPR elements, the reader will want to stick around to find out more--to find out everything, with a sense of avid anticipation and participation rather than frustration and disengagement, uncertainty, and dissatisfaction.

Off the top of my head, I can think of two current bestselling authors writing series focused on main characters in white collar fields. In both series, the stories are plot-leaden (as opposed to merely heavy). These authors are known for action-packed stories, and they deserve kudos for providing that every single time. However, in both cases, the series are almost completely character and relationship-development deficient. In either, beyond what the main character does for a living--with above-average intelligence--we learn almost nothing about him personally, about his current life beyond his work and the story quest, about his past and his future drive. All his internal conflicts and goals and motivations are plot-focused to the point where his own private needs and desires are rarely if ever considered or attended to. Relationships never feel well-grounded. They happen in the present--and they merely happen. We're given only sparse glimpses about what occurred between characters in the past and those glimpses are cold without strong, emotional connections, memories, or developments. Readers don't feel any encouragement about future developments with those relationships either. Personal attachments--temporary or otherwise--serve the plot. Period.

The sheer evidence of the insufficiency of character and relationship development lives in how neither author includes enough "downtimes" (a point in which the main character takes a rest from the action to reflect) within the extreme action sequences of the individual stories. The main character in both series is almost constantly running from or toward something. He doesn't sit down and ruminate on his life, let alone take that time to cultivate strong connections and emotional attachments with the people running around with him. As a result, the consequences are muted, lacking both tension and intrigue, and certain exhaustion (also for the reader?) may be the only end-game in sight.

Whenever I read these series which are admittedly enjoyable (though ultimately disappointing because of all the reasons I mentioned above), I'm forced to imagine the author holding a doll of his very popular series character and slam-driving that poor, defenseless thing through one breath-stealing action sequence after the other without a single break in the arduous trek each book goes through. Nothing personal breaks up these ruthless tasks the character is given back-to-back in every story.

But, not only are the creators forcing the characters through the motions, the authors aren't going beyond those motions themselves--and that's the biggest travesty of un-/underdevelopment of core elements. In both cases, the main character isn't dead but he's almost certainly lifeless. Unfortunately for demanding readers who want three-dimensional core elements, the intrigue here is with plots (and--in a stretch--settings, which is a component of character development) almost exclusively. I consider these particular characters little more than zombies. Yes, there is a semblance of life. The POV character is actually moving around, going through the motions, but he isn't actively living, breathing, or functioning beyond basic instinct in direct response to the plot, which he serves. With a little more effort, these authors could actually breathe life into all CPR elements of these series stories and make them wonderful and memorable beyond the exciting plots.

Fix this axiom in your mind: Character reveals plot and relationships, just as plot and relationships reveal character, and relationships reveal character and plot. This trinity is vital to the cohesiveness of your stories. They work together to unearth, connect, and layer a story. The strongest stories are the ones in which every part of the story--the characters’ role, physical descriptions, personalities, strengths and weaknesses, relationships, skills, conflicts, goals and motivation, and even settings--becomes cohesive and fits together organically. We’ve all read books in which the key aspects didn't quite merge naturally. Maybe we didn’t notice a specific issue, but we knew something was off, lacked logic, or didn’t quite fit with the rest of the story, and the imbalance frustrated us. There’s a chance you never finished reading those books. The ones that you absolutely cannot put down and that stay with you every minute of the time you’re reading them and for years afterward are the ones in which every aspect is so intricately connected that separating the threads of CPR development is difficult, even impossible.

While it should be easy to spot dead or lifeless conditions in our characters, plots and relationships, it's nowhere as simple as author would like it to be. In this three-part article, we've gone over some of the telltale scenarios that may reveal if any aspect of your CPR development is outright dead or simply lifeless, in whole or in part with the "alive" part potentially carting around the "lifeless" or "dead" elements. So often these scenarios are utilized as if they're legitimate methods in so-called CPR development--and they can't and shouldn't be. The scenarios in this article should help you pinpoint if any of your core elements are dead or lifeless.

Have you ever read a book with dead or lifeless relationships? Leave a comment to tell me about it!

Find out more about CPR FOR DEAD OR LIFELESS FICTION here: http://www.writers-exchange.com/cpr/