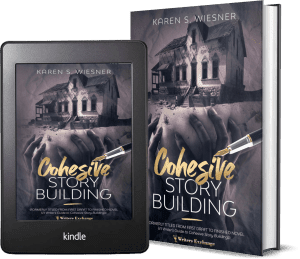 This will be the first of three posts focusing on how (and why) to build tension and twists into your fiction.

Tension and Suspense can be described as the sensation of uncertainty and anticipation in the reader. Without them, your reader is uninterested and uninvolved in your story—cardinal sins where any work of fiction is concerned.

Tension is any type of awareness that brings the story to the fever pitch of anticipation. Tension must begin at the start of the story and must be kept intense throughout to prevent your reader from being disappointed or bored.

While many writers probably don’t see a difference between tension and suspense, in the structure of a story I believe tension is the milder of the two. Tension is anxiety, where suspense is agony. So tension could be considered the positive form of the two, because there’s an element of hope in it. With suspense, there’s danger, and it’s generally because something dreadful is coming.

Think of the movie While You Were Sleeping. There’s no real danger in this romantic comedy, outside of the fact that the heroine might marry the wrong guy. The film crackles with hopeful tension—the viewer worries because she desperately wants Lucy to end up with Jack, not his good-looking but mimbo brother, Peter. What’s at stake is happily-ever-after for two wonderful people. Viewers feel tension, not suspense.

The danger in the Aliens movie series is of the global-annihilation sort. Viewers are held in agonizing suspense, knowing that if these creatures escape and multiply, the worst thing imaginable will happen—and the viewer dreads it. What’s at stake is total elimination of the entire human race. No happily-ever-after for anyone.

Both tension and suspense are tricky to achieve and sustain. In each, you’re bringing your audience to the snapping point, and then and only then giving them what they want—temporarily. The tricky, sticky part is that you’re withholding a resolution that the audience desperately wants. If you keep it out of reach too long, you’ll lose your audience. If you give them too much of what they want too soon, they’ll have no reason to stick around.

Tension and suspense are absolutely necessary in every story.

Release as any temporary easement of either plot or romantic/sexual tension. Some of the many forms release can take are a kiss, the resolution of a red herring or a clue that seems to solve part of the mystery, or an answer that leads the character closer to getting what he wants. Release, like tension, is part of the causal chain of events essential to reaching resolution. It has to make sense in that chain and become part of its natural progression.

Downtime is a form of release, but it’s more intense and, like the climax, it happens only once during the course of a novel, during a time of incredible tension. This is the bleakest portion of the story, when all hope has seemingly been lost. The obstacles standing in the way are too numerous, too monumental, too impossible. The main character takes release from the action to reflect on what’s happened and what could have been, and, by all appearances, he seems to give up the fight. During downtime, the character now has a glimpse of the happily-ever-after he’s convinced has slipped from his fingers. This is a temporary respite from the extreme suspense. Characters—and readers!—need this desperately. If you don’t include it, the reader will get so exhausted from the fast pace, she won’t care how the book ends. She’s too tired to care.

Following downtime, the black moment, as the climax of downtime, comes. The character has no choice but to act at this point. Remember John McClane in Die Hard 2: Die Harder? He felt he’d expended all viable options to save his wife and stop the terrorists. He’s depressed, brought to his lowest point, and he reflects on all that’s happened and what he’s about to lose (this is the downtime). But then the pilot brings a swift end to all dithering when he takes the chance of blindly landing the plane—at exactly the same time the terrorists are attempting to make their getaway (black moment). At that point, John has absolutely no choice but to find a way to succeed. This provides the momentum for the final showdown.

Here again, I see a difference between release and downtime. Like tension, release is the milder of the two. Release is temporary relief from anxiety, while downtime is temporary relief from agony. Release could be considered the positive form of the two because there’s an element of hope in it. With downtime, the character believes he’s lost everything, danger’s on its way back, and he’s convinced there’s no stopping it. The ultimate dread is produced, because few people can relax when they know everything they ever wanted is about to go down the toilet. That naturally produces restlessness, recklessness, and intense edginess.

Release and downtime are also absolutely necessary in every story. But only with a cohesive logic in the build-up of downtime, suspense, and black moment, and with an equally meshed logical resolution, will your reader be left satisfied and smiling upon closing the book.

This in no way, however, means that you can’t throw a twist in at the end of your story—provided that it fits logically and cohesively with what you’ve already set up in the beginning and middle of the book.

In Part 2, we'll talk about tips for incorporating twists effectively into your fiction.

Leave a comment to describe the most memorable tension you've ever experienced in a book or movie. Why do you think it was so effective?