This is the final of eight posts focusing on my Woodcutter's Grim Series and the stories behind classic fairy tales.

INTO THE SUN, Part 3 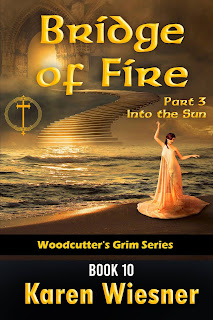 ** Loosely based on "The Three Billy Goats Gruff". A shape-shifting goat, William Gruff escaped being bound to the evil pervading Woodcutter's Grim, the sole shelter for supernatural creatures. Years later, he and his pregnant wife, Adaryn Azar, a phoenix, have no choice but to flee there themselves. But just one phoenix can exist in the world. Will the powerful magic Liam wields consume him before he can build the only bridge that can take him and Adaryn into the sun of Eternal Paradise? **

While I was outlining Part 2 of BRIDGE OF FIRE: Book 10, I became aware that one of the things that had never felt "connected" between the Woodcutter's Grim Series "Real World" and the "Mirror Darkly World" introduced in HUNTER'S BLUES, Book 9 was that the Protectorate Guardian in the Mirror Darkly World was a Pallaton (Reece). Why would that be? What caused the change/discrepancy between the two worlds? Since that book was already written and published, I had to abide by the decision and create a plausible explanation for the fact.

I finished all three outlines for the parts of BRIDGE OF FIRE, then moved onto another massive project that took up most of my time. Nevertheless, in the back of my mind, I was thinking about the apparent discrepancy. In the very least, I wanted to answer the question for myself. I had a dim but gradually brightening lightbulb come on during this time: I'd already inserted two Pallatons in A NEW BEGINNING, Part 2 and INTO THE SUN, Part 3 in the characters of Nazarha and her mother. When I went back into the outline to refresh myself just before I started writing Part 1, I had a brilliant spotlight of illumination. I knew how to connect the Mirror Darkly and Real worlds. The explanation finally resolved what suddenly seemed like a major discrepancy (to me anyway) in the series.

But that wasn't the only question that was bugging me. Even after I'd written the first draft of all three parts of BRIDGE OF FIRE, something else was niggling at me about who Nazarha Pallaton was in relation to the main female character, Adaryn Azar, throughout the three segments. Coming up with the answer to that is when I truly felt like this series was gratifyingly complete and strong in a way it'd never been before (again, only to me--I seriously doubt any of my readers even noticed).

I feel great nostalgia in coming to a conclusion with Woodcutter's Grim Series--Classic Tales of Horror Retold. When I began it, I was a contemporary romance author who didn't believe I had what it took to write horror or fantasy, my two personal favorite genres. But, with Woodcutter's Grim, I got to develop stories with vampires, werewolves, dragons, phoenixes, various shapeshifters and creatures of lore, and I even mostly made up a monster of my own (the Unspeakable/Polyhedra). I dealt with alternate worlds, the ultimate good and the ultimate evil, a secret organization with roles that are passed on from one generation to the next (the Protectorate), familiar faces I've come to love and look forward to revisiting again and again, all while combining fairy and folk tales, mythology, fables, parables, nursery rhymes and poems into one complex, fantastical world. I hope my readers have loved taking this journey as much as I have and will want to drop by this town all over again with future readings.

At this time, I'm playing with the idea of a "prequel" trilogy for the Woodcutter's Grim Series to develop the origin of the Unspeakable creature I created for BRIDGE OF FIRE. Only the future will tell if anything comes of my brainstorming.

Unique creatures of folklore are something that fascinates me immensely. Leave a comment to tell me about your favorites!

Next week, I plan to post one of what will be many writing craft articles.