This is the sixth of eight posts focusing on my Woodcutter's Grim Series and the stories behind classic fairy tales.

OUT OF THE ASHES, Part 1 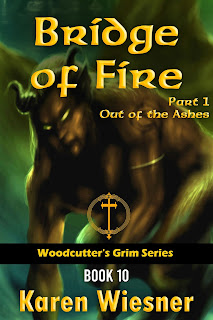 ** Loosely based on "The Three Billy Goats Gruff". The youngest son in a family of shape-shifting goats, William Gruff escaped a dire fate but his life is desperately lonely, engineering fantastical bridges that defy logic. Nothing prepares him for meeting Adaryn Azar.

Adaryn has a secret that keeps her on the run Loosely based on "The Three Billy Goats Gruff".. Just as everything she's ever wanted is about to come true with Liam, her enemy discovers her. But starting over would mean losing the timeless love she's found with Liam… **

BRIDGE OF FIRE started with a vivid dream I had of a man awakened in the middle of the night by a knock on the door. The police had come to tell him his wife was dead. He went to ID the body, and he was devastated and unable to function by this event. But, later that night, she came back to him and told him things about herself and her life that he could hardly get himself to believe...and yet he wasn't without his own secrets he'd been keeping from the woman he loved.

While I didn't immediately see this as an installment of my Woodcutter's Grim Series, I quickly found a way to make it work in in my horror/fantasy world. I'd always wanted to write one based on another of my favorite fairy tales, "The Three Billy Goats Gruff".

When I first started working on BRIDGE OF FIRE, I assumed it would be one possibly large novel. But, when outlining, I'd barely gotten past the part that merged with my dream (guy thinks his wife is dead, then finds out she has a huge secret--just like he does). They decide to go to Woodcutter's Grim, because it's the only safe place for supernatural beings such as they are. Also, in writing scenes in the viewpoints of both main characters and the heroine's closest family Torin (who has a young daughter), the story was fleshing out fast.

The outline was huge at that point. I'd realized once the newly forged family entered Woodcutter's Grim, I had another character I wanted to include the POV of to really round out the story. I knew then that I had two novels in this one outline. I stopped, deciding I needed to sort it out before proceeding. I went back to the beginning and ultimately ended the outline for the first part of the story in the most natural place (when their new location would become Woodcutter's Grim). I went through, added scenes for the new POV character, then continued outlining Part 2 of the story again.

Unfortunately, the same thing happened again long before I finished outlining the second part. The outline was growing bigger and bigger, and I was nowhere near coming to the end. Dividing it into three parts instead of two seemed only logical, and again I was able to find a logical place to divide Part 2 from Part 3 and switch up the POVs I wanted to feature in Part 3. Even after I finished the outlines, I wasn't entirely sure whether the books would end up novellas or novels, but they turned out to be full-length novels. All three parts of BRIDGE OF FIRE will be published within a few days of each other.

"The Three Billy Goats Gruff" is a Norwegian folktale with a moral about being brave and clever in the face of obstacles that get in your way. I find it hilarious that Wikipedia describes it as having an "eat-me-when-I'm-fatter" plot. Who knew such a thing existed?

Have you ever written a story with a deliberate moral in it? Leave a comment to tell me about it!