Reviews 66 The Collegium Chronicles Novels of Valdemar by Mercedes Lackey

Reviews haven't (yet) been indexed. 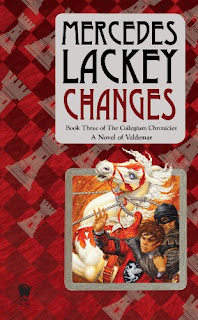 For staying power in publishing, Mercedes Lackey is to be admired. It is very hard to grab and audience and keep their attention as they grow up, and then have them present your novels to their teenage children.

That has happened with my novels, so I know what a thrill it is when a "next generation" (and even a next after that) reader turns up on Facebook recommending a series to their friends.

Lackey has not only pulled that generational trick off, but has also grabbed the fans of other writers. In fact, I was introduced to Lackey's work by fans of my books, and yes, there is a resonance.

I find Lackey's style and substance entirely luminous and easy to read - easy to sink into the story - easy to like (or dislike) the Characters, and I always pick them up again if I have to put them down.

So I can understand how our fans overlap.

The Collegium Chronicles are focused on young people just deciding on a direction in life, and starting to implement it. They are taking inventory of their talents, adding skills, training, reaching to be the best they can be. And these particular young people are positioned at the center of government of a large, prosperous Kingdom.

That Kingdom has an heir-apparent getting married and starting life -- right next to the Collegium characters.

Most of the fans of the Valdemar novels are not so centrally placed in affairs of State, or the Economy, or the spy game.  I expect we, the readers, are mostly content not to be embroiled in the spy game, or life-threatening action.  Being the target of assassins is not how we really want to live.

However, I just took a walk around my neighborhood -- suburban, single family homes, quiet HOA style place. And there was a forensic unit parked outside a neighbor's house dusting their car for prints.  I'd never seen or heard of anything like that in this neighborhood but adjacent ones have had car break-ins.

Today all of us, everywhere, resonate to the symphony of emotions being a Target Of Assassins evokes.

Mercedes Lackey nails that pea-soup of conflicting feelings in Book Three and Book Four of the Collegium Chronicles.

Her main characters have just been through having a barn burned down, potential riots, and being kidnapped and rescued -- ending off Book Three, Changes, with potential assassins still on the loose and enemy countries brewing trouble. 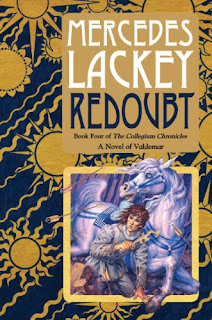 Book Four, (of Four) Redoubt, starts with a Royal Wedding filling the Collegium and the adjacent Palace Grounds with people (hopefully trustworthy), and the main Talented characters who are still just students filling the roles of adults of their future professions.

The main viewpoint Character, Mags, a Herald Trainee is known as a Hero because he rescued the kidnap victim and he's the "Harry Potter" of the field ballgame popular at the Collegium (where magic is taught and disciplined.)  He is secretly being trained as a spy, and has scored some promotions there, too.

By the middle of Redoubt, another couple who have been hot for each other get married -- to solve some family-politics problems as much as because they want to build a life together.

The main Character, Mags, likewise has a love-interest but hasn't gotten serious enough by the middle of Book 4.

So Lackey is telling the story of how Relationships, generation after generation, shape the macro-political landscape within which we live.  That is pretty much what Sime~Gen is about -- how us hapless, no-account, individuals just hammering away at our personal and problematic lives, do shape and direct the course of History -- often in ways we will not live to learn about.

Are Heroes born? Made? Or some combination of the two with other variables amidst circumstances?

How much of what we accomplish in life is a matter of our own, personal, choice?  Is there such a thing as Luck? Or do you make your own Luck?  If so, what rules do you follow to craft an amenable sort of Luck for yourself and your family?

In Redoubt, Mags is beginning to re-craft his identity by conquering his (wildly illiterate) accent, and taking some pride in his appearance.

Like Harry Potter, Mags goes from the bottom rung of the disregarded kid to "fame and glory" climbing up each rung of the ladder by dint of ever strengthening Will.

Mags hones his problem solving ability and judgement in fluid situations filled with deadly enemies, and becomes a more formidable adult with each triumph.

In Redoubt, Mags already knows the difference between Lust and Love -- and is aware he feels Lust that is not Love (yet).  I think the reader sees deeper into Mags than Mags, himself, does, and I think the girl has made up his mind for him. But that's just Lackey's smooth writing.

He's not the King, so it doesn't seem the good of the Kingdom depends on his choice of bride -- but the master theme of the Chronicles seems to be that family matters, Relationships shape society, economy, and politics over many generations. Who you marry matters.

That's a theme dear to my heart. Love Conquers All.

Reviews 66 The Collegium Chronicles Novels of Valdemar by Mercedes Lackey