Reviews haven't been indexed yet.

Ks Lash Beauty
How To Meditate: A Complete Guide to …
What to wear: outfit ideas for Christ…

Battle Ground is like part of a book, or the middle of a long book. 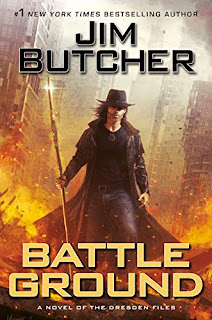 It starts with a night time approach to Chicago with dread in the air, gives a quick (nice and smooth) reminder of where we are in the long-long Dresden saga, then plunges right into magical battle preparations, explosions, destruction, blood-blood-blood, David-vs-Goliath battles, squad actions, cooperative attacks and defenses, followed by more and more and more strategy, tactics, execution, collective injuries, and deaths.

It ends with several issues and affairs yet to be settled, but the initial problem is resolved (mostly).

Remember that Harry Dresden himself was dead and a ghost for a good, long, adventurous stretch of time when Jim Butcher colored in the details of how Dresden's multiverse differs from ours, or what we think ours is.

So though some characters we remember clearly from previous books die, we're not so sure they won't be back.

There are a lot of characters, and most of them we remember from Dresden's previous adventures.  They are given introductions that remind you of them, but don't explain who they are to Dresden.

This is all very well done -- but the craftsmanship won't be apparent unless you've read the previous  books.

I don't recommend starting to read The Dresden Files with this entry - but I do recommend the Series very highly. It is not Romance, but has Love Story and Relationship dynamics driving the plot and the character motivations, interspersed with whopping good magical combat scenes, and plenty of not-so-magical brute force combat.

Dresden is a Hero - old school style, with guts, determination driven by the love of people, and particular persons more than others. But mostly he is a Champion, a defender of humanity - which is always under attack by other-dimensional Beings and magic users from our every day reality.  Then there are the simple crooks to be thwarted. Like Sherlock Holmes, Dresden - as Chicago's only professional Wizard - is hired to solve cases for people  who desperately need help. He just can't resist a plea for help.

So now, when he needs help to save all of Chicago, those he's helped rally round, and even take over.