How To Make Ghosts, Vampires, and Demons Real

Previous parts in this Series are:

Part 3 - What Makes and Idea Too Crazy

Here is an article from 2020, targeting the Halloween readership -- about ghosts, and the scientific explanations for what people are "really" seeing or feeling but interpreting as "supernatural."  You've read a lot of these, I'm sure.

The multiple universe worldbuilding for very long series of very long novels is usually done "on the fly" by authors who accidentally write the first book in a series thinking it is a stand-alone -- only to have it sell so well that the editor asks for another book.

This has happened to me. It's REAL.

It happened to me also on submission.  Here's one story:

My Agent told me I needed to establish another byline, so I thought about it, and found I could write one of the action-action-action novels such as we discussed in Part 3 of Worldbuilding For Multiple Alternate Universes.

So I submitted a very short novel to my Agent which he said was too short for the market he had in mind, and I should make it longer.  So I added more action scenes - combat, unarmed combat, space-battle, but that didn't satisfy my standards for story.  So I added more story, more Relationship and Character to bring it up to the length he wanted.  He liked it, and submitted it.

My Agent called me back shortly thereafter with good news and bad news.  He had an offer from a Mass Market paperback original editor, but they wanted a sequel.

There was a chance for even more books in the series, so I needed to add more worldbuilding - creating a sprawling galactic war backdrop that could support many sequels if needed.

As it turned out, the publisher and editors all shifted jobs (as happens constantly in Manhattan Publishing) and the third book was never sold, but the two hit the stands and sold very well.  I retrieved the rights, and posted Hero and Border Dispute,  on Amazon Kindle as a single volume because they are very short novels by today's standards.  You can read free on Kindle Unlimited. 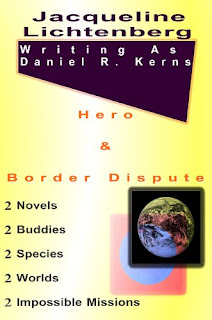 By expanding the world building behind the story of HERO I  learned a lot about how the Setting and the Story interact with the Plot of a novel, or a Series.

Hero and Border Dispute both occur in a single level of reality, no alternate universes, no "supernatural."  But those elements are in there, behind everything, hidden, and easily to be revealed if necessary.

The structural integrity of the world building behind the Setting bespeaks the author's intentions, values, understanding of Real Reality, and scope of Imagination.

The world you build reveals more about you than what you wear, how you speak, what makes you smile, or whether you believe in God.

And most of the time, as you write, as you cast the outline of a story into a sketch, you have no idea just how much you reveal.

Are you precise, organized and goal directed?  Are you helter-skelter, mess churning, haphazard, and amateurish?  Are you an artist or an artisan?

Are you able to see the paranormal dimension in your own everyday reality?  And if you can see it, can you explain it? Do you understand it? Have you studied it? Are you master of the state-of-the-art material all humanity has generated over centuries of study of the Paranormal?

The answers to those questions are the bare bones of any fictional world you build to tell a story against.

That is the essence of Worldbuilding -- building a world broad enough, strong enough, coherent enough, deep enough, and variegated enough to support a long series of long novels -- or a series of long stories broken into shorter novels, shorter books, books designed to fit into any publishing environment.

I like to depict "Aliens" -- people who maybe aren't very human, but have enough in common with Earth's humans to be recognizably people.

The question that generated the premise behind the novel HERO -- was simply, "What if an Alien species, allied to humanity to fight a vicious war, regarded heroism as a horrendous crime against their species?"

What if heroism was a stigma?

What if well meaning, big hearted, humans awarded such an Alien some supreme accolade for heroism? And what if he/she/it then went home?

What traits in an alien species could qualify them to be exterminated?  (Yeah, I know, so I'm a Star Trek Fan with a lot of Doctor Who included.)

So in this case, the book idea started with a Character feeling horribly embarrassed about something the reader would regard as an Honor.

And the plot, and the world (and other Characters) unfolded from that overwhelming embarrassment. 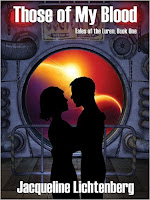 But if you look closer, you'll see that the World (the galactic war situation) these characters live in make a thematic statement you find you most of my other work -- what if what you think you see isn't actually there?

What if you think you see ghosts -- but actually they're just real people living in another dimension? 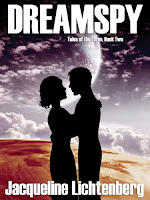 What if Vampires (complete with blood lust and apparently magical powers) are just Aliens from another Planet stranded on Earth and struggling to get home?
I wrote that as THOSE OF MY BLOOD and the

parallel novel DREAMSPY, and was pleased with the hardcover editions, except for the covers. The subsequent publishers took a little of my advice, and I ended up with these covers, that at least show it's a Relationship Story.

What if Demons are REAL???  What if a Vampire's human friend was haunted (and viciously targeted) by a demon?  I have a series of Vampire short stories about a human/Vampire pair who have demon problems -- reprinted here:

I've rarely used the "demon" character in my own work even though I have followed with rapt attention the way other writers, especially Romance genre writers, have developed the common, ordinary, symbol of pure Evil, the threat to the humanity of a human, into a varied and unpredictably almost-good-sometimes Plot Moving Character (i.e. a point of view Character).

And in the series we looked at in Part 3, the Cassie Palmer series about a time traveling guardian of the timeline titled a Pythia, we have a fully rounded depiction of demons, gods, half-breed god/demon and human/demon and god/human mixes as people trying to just live "normal" lives, and having to morph into Heroes.

The Demon, Ghost or Vampire -- the Evil One -- as the best of the Good in humanity, is actually what Science Fiction and Romance are really about.

You will find that in all my novels -- the world building is predicated on the assumption that the universe is rooted in the Fountain of Love in such a way that LOVE DOES CONQUER ALL.

The essence of solving any problem humanity might encounter will always be the emotional bond between one human and another -- no matter the details of the species each human belongs to.

In other words, the essence of my worldbuilding is a philosophical idea about the nature of reality -- that all the universe we call "real" is fabricated from the musical note of Love.

But to solve problems, we have to figure out what is really happening, and ride the wave of reality by understanding what is "right" and what is "wrong" in the situation we are in -- do righteously, and Love will bring an optimum solution to the problem.

So that science article about Ghosts cited above is in hot pursuit of the solution to some problems.  It poses the question gnawing at most of us -- if Science can't analyze it, then is it actually Real?  Or put another way, "What exactly is Reality?"

When you build a world to house multiple alternate Universes where the same Characters live through different plots - becoming different people because of their choices and the results of their actions - you, the writer, must know what is "right" and what is "wrong" in each of the universes and why that is so.

What property of each of your alternate universes (pocket realities, or whatever) determines the laws and rules of righteousness?

The answer to that will depend on your take on what property of our everyday reality determines what the laws of morality and ethics are.

For example: if God is real, and has revealed his Rules of Order in the Bible, then the rules of this Earth's reality are known to most of your readers (or they can Google it).

If your world uses different Rules - how does God manifest in that Reality?

Whether the Characters know it or not, there has to be a "scientific" explanation that you know for the existence of these various orders of beings in your various alternate universes - Magic Users, gods, demons, vampires, ghosts, hostile and friendly -- for reasons.  Everything that shows on the surface of your narrative has to be consistent with those premises.  Just as in Mystery Genre, you must play fair with the reader and be sure there is a way for them to figure out what the "reality" is even if the Characters don't know it (well, especially if the Characters are clueless.)

If God is not Real, and was just made up by bossy humans who wanted control over others, then who made up the Rules of your well built world?  What would the Rules of morality be in a world created by "Demons?"

What do the peoples of your built world think sets the Rules, and what Rules do they argue over? (very hot wars can ensue from such a premise).

As a writer, you don't need to know the answers to these questions consciously. Most of the synthesis of all these variables will be done by your subconscious - but the resulting novels will be incoherent and incomprehensible to readers if you don't train your subconscious and fill it with the Collective Wisdom of Humanity.

You can find a whole lot of different Collective Wisdoms recorded throughout History (and pre-History) and around the Globe.  Set them against one another and you have Conflicts vast enough to support a long series of long novels.