Shadow of the Beast

My first published novel, Shadow OF THE BEAST, a werewolf urban fantasy with romantic elements, is back in print after a few years of dormancy, being recently re-released by Writers Exchange E-Publishing:

This wasn't the first novel I completed. That was the true book of my heart, vampire romantic urban fantasy DARK CHANGELING, first published not long after SHADOW OF THE BEAST and currently available in an e-book duology called TWILIGHT'S CHANGELINGS:

And as a Kindle e-book here:

SHADOW OF THE BEAST was originally published by a small horror press that produced numerous attractive trade paperbacks for several years before closing down. My novel was later picked up by Amber Quill Press, which had a fairly long run before it, too, went out of business. I was lucky to find Writers Exchange, which sells its products in both electronic and trade paperback formats, to adopt most of my Amber Quill books. (It's somewhat disheartening to contemplate how many of my works have been "orphaned" by the disappearances of publishers over the years. Fortunately, we now have self-publishing as an alternative in case switching to a new publisher doesn't work out.) 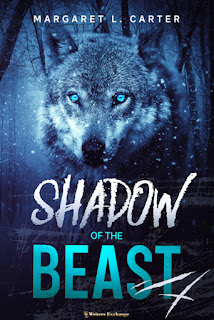 I lightly revised SHADOW OF THE BEAST before the Amber Quill edition was published. The text of this latest version hasn't changed from that one; only the cover is different. The story follows the template of one of my favorite tropes, the Ugly Duckling. The heroine discovers she isn't what she always believed herself to be, and traits that first seem like flaws turn out to be gifts. I've retold that basic story multiple times over the years. My first professionally published work of fiction, "Her Own Blood" in FREE AMAZONS OF DARKOVER, fits that pattern, as does DARK CHANGELING.

Because SHADOW OF THE BEAST retains the text from the previous edition, it features technology that has become obsolete. Since only one scene is affected (where the characters use a VHS camcorder and tape player), the editor decided it wouldn't be a problem and didn't need a disclaimer at the beginning. As far as the plot goes, SHADOW OF THE BEAST has some undeniable flaws. The editing for Amber Quill corrected some of the original version's problems but didn't amount to a major rewrite. The "because line" is weak in places; back then, I didn't realize I was sometimes making characters do things for my convenience as author, rather than from solidly established motives. I've learned better since then, I hope!

What's your philosophy on rewriting older books for re-release or leaving them alone?"

Shadow of the Beast