Previous reviews have not been indexed.

But I have discussed Jennifer Roberson's previous work. She is one of my favorite writers.

I discussed Roberson's Sword-Dancer Saga in the first book review post I did for this blog. 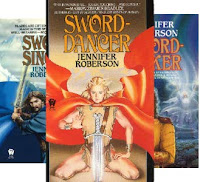 The Tiger and Del, Sword Dancer series went to 7 books, and I loved every one of them.

Roberson's Cheysuli Series - 8 Books - is very much worth your while.
https://amazon.com/dp/B078MRRYYV 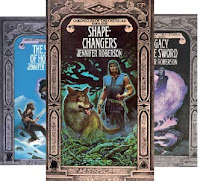 And now we come to a new series, also Fantasy, but with a contemporary setting.  Call it modern Urban Fantasy. 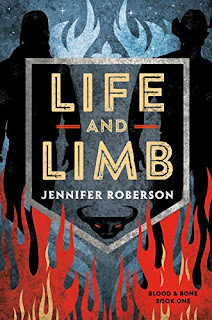 
You may remember the 15 Season TV Series, Supernatural, about two brothers who fight for right in a world of demons, possessions, Angels (fallen or maybe otherwise).  They travel the modern world saving the day from threats most people don't know exist.

It's a marvelous TV Series, but seemed to me to be flawed, possibly because there was more Horror Genre than Romance - more relationships that go nowhere than Happily Ever After trajectories.

I discussed the TV show twice:

And on this blog, Margaret Carter also discussed the show:

We talk about this paradigm of "reality" because it is a fascinating backdrop for Romance, one that is not sufficiently explored.

Now, Jennifer Roberson (that is RoBERson -- not Robson) has brought her Relationship plotting talents to explore this basic concept.

In her afterword, she points out that her first impulse was to create the two lead characters as male and female and play the game as she has in previous series.  But she decided on two brothers to lead this series, brothers who are not physically related but are spiritually related in a way they (at first) don't exactly understand.

They are tutored by a man who seems to be an Angel (actual sort, with wings) working on Earth to gather forces to oppose Evil at an Armageddon.

This man tries to explain their nature to them as he trains them to conquer the evil forces, and supernatural creatures, demons that possess people.

This kind of Fantasy worldbuilding is Jennifer Roberson's strongest talent, and it shows in the first book in this new series, the Blood and Bone series.

This opening chapter focuses on introducing the two young men (who don't like each other - one who just got out of Prison because he killed someone, and the other who is a college educated Cowboy hick), detailing some of the tutorial assignments they are given, so there is a lot of exposition to absorb.  I liked them both.

The thing is, in this introductory novel, the exposition disguised as dialogue or even action, is not annoying.  The story unfolds at a good, solid pace, and the various oddball characters introduced show vast potential for Relationship.

I feel this Roberson series would have made a much better TV Series than Supernatural.

LIFE AND LIMB is not a "copy" of the TV Series in any way.

The world Roberson's characters inhabit is entirely different.  But if you study the 15 seasons of SUPERNATURAL along with this new Roberson series, do a deep contrast/compare analysis, you could learn why I keep harping on the worldbuilding from theme techniques.

The special difference between the TV Series, Supernatural, and the novel series, Blood and Bone, is theme -- and that difference generates the Characters, Plot, and Story that are so different.