Previous parts in "How do you know if you've written a classic?" series are:

Part 1 in this Series is about writing a "classic" illustrating the long time fan discovering new entries in a series.
http://aliendjinnromances.blogspot.com/2012/02/how-do-you-know-if-youve-written.html

Part 2, Spock's Katra, is a long answer to a request for material for an online blog.  My answer focused on Theodore Bikel and his roles in Star Trek.
https://aliendjinnromances.blogspot.com/2015/10/how-do-you-know-if-youve-written.html

Part 3 answers very insightful interview questions from a Podcast host.  The verbal podcast interview is very different, but here are answers done with some time to think of how to explain the invisible connections between Star Trek, my deep study of the fan dynamics of the TV Series, and my own original universe Sime~Gen novels.
https://aliendjinnromances.blogspot.com/2019/07/how-do-you-know-if-youve-written.html

Part 5
James Clavell Move Over
Current Science Fiction carrying on the classic tradition.
https://aliendjinnromances.blogspot.com/2020/02/how-do-you-know-if-youve-written_25.html
--------
Tor.com posted the Nebula Award Finalists, and one of my writing students has a novel on the list (bang-up great novel, too!) Marque of Caine.

Likewise Science Fiction has a "style" and so does "Fantasy."

Embedded in the choice of style are some implicit Worldbuilding components, most especially Theme.  Theme is the one element that appears in (and dictates) every choice a writer makes, whether the writer knows it or not.

Each such broad question begs an answer that is equally broad, and each novel in each genre, presents an answer for readers to think and argue about, or maybe apply to their own lives.

Yes, fiction writing is dangerous.  It could lead to your Soul being held responsible for life choices made by strangers you'll never meet.

Science Fiction is one of the genres founded on asking unthinkable questions.  That was what Gene Roddenberry always said - Star Trek didn't point viewers to particular answers to age-old questions of life, but restated and posed those questions in contexts that sparked rethinking the answers handed down from generations past. In other words, Roddenberry taught that science fiction was for posing questions, not answering them.

Science is, in fact, all about the art and craft of asking questions.  And so is fiction as it takes you on a journey in another's shoes, moccasins, sandals, or even barefoot over coals.

Historical Romance as a genre has added depth and breadth of Character to the ordinary Historical novel.  Focusing on a Romance plot, a writer can ask questions about our History that other story tellers can't quite get at, questions about the meaning of life.

So James Clavell, as noted in Part 4, cast the political strife of the mid-1960's to life in the historical setting of the founding of Hong Kong, and today we see the same forces advanced through decades re-enacting the same play.

That persistence through time gives us a way to recognize a Classic Novel.

The Rise And Fall of the Roman Empire is non-fiction about politics, economics, greed, and decadence.

The point of that historical non-fiction work was simply that the biggest, most overwhelming, unbeatable, solid and Eternal organizational concepts of civilization have a finite lifespan.

Like individual humans, whole civilizations die and leave a legacy.

In the case of Rome, the legacy included much of what Rome borrowed, inherited, copied, and absorbed from Ancient Greece.  Greece, in turn, had built on legacies that can be traced to Ancient Egypt.  Empires rise and fall over centuries (some much shorter lived).  But however far they expand, they eventually contract, shatter, and die -- and descendants pick through the rubble for valuable ideas.

Learning how to view humanity through the perspective of historical epics is easier than you might think.

But it does require a lot of reading.  Along with Clavell's novel Tai-Pan, read also James Michener's novel -- (also published in the mid-1960's and still selling strong) -- THE SOURCE.

They both have love stories, love as a motivation for the heroic deeds of grand Historical Figures, and the way personal human relationships reshape the events of History -- the things some people considered worth remembering.

Romance, however, generally concerns the things such historians don't consider worth remembering -- even though romance itself, as it occurs in the lives of great heroes and forgotten work-a-day folks, is by far and away the single most important experience of human life.

Romance is the connecting tissue between the Rise and Fall of the Roman Empire, The Source, and Tai-Pan, and it is utterly invisible in these giant classic novels about the tsunami of History spanning thousand of years.

Yes, I do think today's headlines about Hong Kong are the early rumbles of a tsunami of history that will be written about, after they've scrubbed away all the Romance.

So what if Romance writers added that Romance element back into the crafting of the narrative of human history - that is the foundation of human destiny (if the Hellenistic concept of destiny is even real).

In the science fiction genre, the most you can expect today is a Love Story, usually from the male point of view, and about what a man will do for the love of a woman.

Helen of Troy is a Classic for a reason.  Half the readers in this world are male.

So, to craft an epic future history out of Romance, study the mere Love Story and how such a story can encompass the view of History styled in such works as Clavell, Michener, etc. have used to create their Classics.

Now consider a new novel, easily viewed as a Future History such as Heinlien wrote, but with the scope and depth Edward E. Smith incorporated into his Lensman Series. 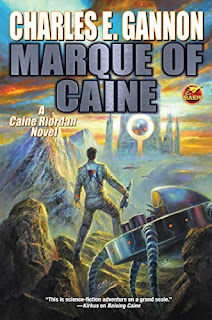 Marque of Caine is the 5th in the series about Caine Riordan, a Polymath tumbled into the sudden opening of Earth to the interstellar civilizations out there already.

This 5th entry in the series has the style of James Clavell, the scope of James Michener, the depth of Edward E. Smith, with a heroic main character driven by a love as potent as Paris's for Helen of Troy.

In case you don't recall, Helen was desperately loved by a true Hero, but was not a woman of strong character such as we would admire today.  She just messed up the plans of great men.

Google "Who loved Helen of Troy" and find summaries such as this:

-----------
Known as "The face that launched a thousand ships," Helen of Troy is considered one the most beautiful women in all literature. She was married to Menelaus, king of Sparta. Paris, son of King Priam of Troy, fell in love with Helen and abducted her, taking her back to Troy.

During an absence of Menelaus, however, Helen fled to Troy with Paris, son of the Trojan king Priam; when Paris was slain, she married his brother Deiphobus, whom she betrayed to Menelaus when Troy was subsequently captured.

Whether the women of the past were as heroic as women of today, or not, the men who wrote History often showed little respect for anything female.

Charles E. Gannon has brought the Helen of Troy character into a Heinlein style heroic woman.  Many commentators today regard Heinlein's writing as sexist -- it was, but in the way of glorifying the heroism of woman.  That, in its time, was a defiant and dangerous way to portray women, so very often Heinlein's style edges into sexism.  Charles E. Gannon faces no such restriction.

The female aliens and human women in the Caine Riordan series are portrayed freely as Characters with strengths and weaknesses as varied and unpredictable as real people.

Caine Riordan fell in love at first sight, had a brief fling with his woman that resulted in an unplanned pregnancy, and then he was swept away into the vortex of time and history.  He then spends years trying to reunite with this special woman, who is just definitely the only woman for him.

Meanwhile, she is swept away by Aliens who allegedly are trying to heal her mortal wounds.

In Book 5, Riordan plunges into the interstellar civilization tackling test after test the Aliens fling at him until at last he finds out why they are testing him, and experiences a dubious encounter with his woman which inflames his determination to rescue her.

Along the way, during all 4 previous novels, Riordan's character has been illuminated by the quality of friends he has made.  Eat this point, it is not surprising this cohort assembles to help Riordan in what seems to be just a personal quest.  The reader now understands the scope of the challenge facing Riordan.

Riordan has to win through for the sake of all humanity -- and probably a whole group of Alien species.

The haunting questions posed by the Caine Riordan novels center around why civilizations, human and maybe non-human, both rise and inevitably fall.

Why is stability so unstable?

In other words, the Caine Riordan series is addressing the issue of whether there is, or maybe could be if only we knew how, such a thing as a Happily Ever After.

The Caine Riordan series is not a Romance, but its central, core theme seems to echo Clavell, Michener, Smith, "Should there be such a thing as a Happily Ever After either for individuals or for whole civilizations?"

The Caine Riordan series is woven of the stuff from which everlasting classics are made.