To ending and apocatastasis

I wondered whether, if I spent long enough with it, the machine would distill the essence of my work out of me the way I had never quite managed for myself. And if it could, was that a perfect artistic tool or the violent intervention of technology into my most human heart? How would I feel if it worked, and the machine's version of my work was better than mine? 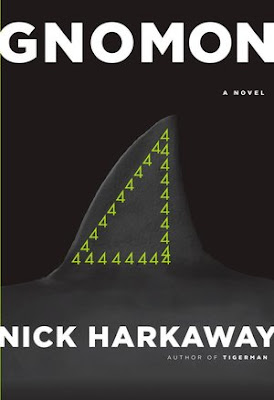 A few words about Gnomon, by Nick Harkaway: Pretty cool, but too long.
I know my university-student-self would've loved it. As it is, it brought me a lot of diversion and some joy when I read it this past summer. It's about reality and perception, mind and Body. It's a murder investigation. It's a surveillance state that offers full transparency, and no one seems to mind. It's Inception. It skips through time. It's the mathematics of high finance and videogames and St Augustine. It's a book of art and digressions. (Here's a better summary.)

And in the end it's not real. It's perceptual.

As a novel, it's baggy, and unfortunate that its distinct threads are all told in the same voice. But it's a treasure chest of ideas. Also, I had to look up a lot of words.
I picked up my copy again this week as I'm reorganizing some bookshelves. Flipping through it and rereading all the passages I'd marked has been a delight.

In a few moments she will start work, and the  day will set her inevitably on the path to the involuted Alkahest. She is just hours from her first meeting with weird, cartilaginous Lönnrot, just over a week from her loss of faith in everything she has believed in her life. As she steps out of her slippers and begins to wash, finding in the animal business of grooming the growing understanding of her body and its place in the process that is her, she is stepping not only on the cracked with shower tray but also on to that road, the one that conducts her without let or hindrance to a point of crisis: to ending and apocatastasis. She apprehends this now with knowledge she has, from her limited vantage point inside the flow of events, not yet gleaned — but that knowledge is so significant that its echo reaches here even here, gathered in the slipstream of the Chamber of Isis and the most complex and saintly murder in the history of crime. Neith's consciousness is etiolated this morning because it touches itself irregularly along its own extension in time, a contact that makes her almost — but, crucially, not quite — prescient. Instead of foresight, the Inspector gets a migraine, and in that small difference she sets her feet on the the pattern that must eventually lead her to all the things I have already mentioned, but most fatefully — fatally — to me.

To ending and apocatastasis