What do you know about yourself?

Sounds a little like Atwood's, "Men are afraid that women will laugh at them. Women are afraid that men will kill them." This is Virginie Despentes. But her statement is not about how men and women behave, it's about how society perceives them. Imagine, Despentes prompts us, if a woman wrote about men the way Houellebecq writes about women.

This is not an easy book. King Kong Theory, by Virginie Despentes, is ferocious. Like any good manifesto, it sucks you into its worldview without giving you space to breathe or time to think. 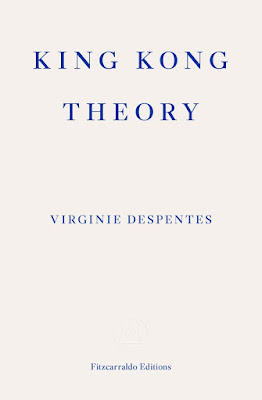 Little girls are bought up learning never to hurt men, and whenever a woman flouts that rule, she is quickly put back in her place. No-one wants to know that they are cowardly. No-one wants to feel that in their own flesh. I'm not angry with myself for not daring to kill one of them, I'm angry at a society that educated me without teaching me to wound a man if he tries to fuck me against my will, especially when this same society has drummed into me the idea that it is a crime I should never get over. And mostly I am fucking furious at the fact that, having been faced with three guys and a gun in the middle of a forest with nowhere to run, I still feel guilty that I didn't have the courage to defend us with a little knife.

This is the kind of feminist the world needs! Or is she? Though I was swept up in her diatribe, when I stepped back to unravel what I'd read I found myself not always wholeheartedly agreeing. For example, she defends prostitution for the agency it lets women claim over their bodies. To which I can only say, yyesss but that's nnnott exactly the whole story.

If we do not push on towards the unknown that is the gender revolution, we know exactly what we will be slipping back towards. An all-powerful state that infantilizes us, meddles in our every decision, for our own good — keeping us in a state of childhood, of ignorance, fearful of punishment, of exclusion. The special treatment so far reserved for women, using shame as the primary tool to enforce their isolation, their docility, their inability to act, could be extended to everyone. To understand the mechanics of how we, as women, have been made to feel inferior, and been trained to become a crack team that polices itself, is to understand the mechanics of control of the population as a whole. Capitalism is an equal-opportunities religion in the sense that it subjugates us all, and leads each of us to feel trapped, as all women are.

All this to say, this book is loaded with theories sprung from analyses on top of throwaway observations, and I wish some of them had a little more room.

Despentes puts a lot of responsibility on women, which doesn't seem fair, but that's the point. Who else is going to fix things?

What do you know about yourself?