Part of you wants to flee, screaming

The Woman is well dressed and clean, but there is a high, manic gleam in her gaze, and her bright, cheerful voice sounds false. No one is ever that happy. She's clearly Not From Around Here. Maybe she's an immigrant, too — legal, of course. Maybe she's a Canadian who has been driven mad by the cold and socialized medicine. 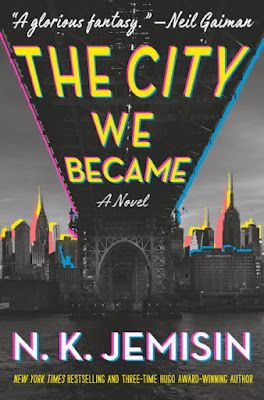 The City We Became, by N.K. Jemisin, is a timely, topical love letter to New York City. It's a fun book —  Lovecraft meets Sense8. A kind of superhero adventure, where a city comes together to battle an invisible evil.

In Your House: Beware of Dog
Seal Shore campsite
Older adults (60plus) lockdown home w…
Do you know which Countries Have esca…
Wuhan Weather Report
The monster is insidiously infecting New York; it might be better known as intolerance. The White Woman is a not so subtle metaphor for straight white privilege — her name might be Karen.

She's not looming anymore — not as much, anyhow — but the air of patronizing concern that she radiates isn't much better. Aislyn stares at her, still trying to figure out whether she should be insulted. The Woman leans closer. "That's why you're afraid of the ferry. Half the people on the island absolutely dread crossing that water every day. They know that what awaits them on the other end isn't the power and glamour we can see from here, but bad jobs and worse pay, and prancing manbunned baristas who turn up their noses at making just a simple goddamned coffee, and prissy chink bitches who barely speak English but make seven figures gambling with your 401(k) and feminists and Jews and trannies and nnnnnNegroes and liberals, libtards everywhere, making the world safe for every kind of pervert. And the other half of the island is the baristas and chinks and feminists, ashamed they can't afford to live there and leave Staten Island for good. You are them, Aislyn! You carry the fear and resentment of half a million people, so is it any wonder that part of you wants to flee, screaming?"

A city can awaken, can be awakened. I love that this city is so diverse, and that its parts channel music, art, math. There's a bit of magic hand-waving at the end (or maybe I dozed off), but it's all very optimistic. I'm interested to know the personified stories of other cities.
Listen to N.K. Jemisin in conversation with her cousin W. Kamau Bell at the New York Public Library.
Prologue.
Excerpt.

Part of you wants to flee, screaming