When promotional material for Cult Writers: 50 Nonconformist Novelists You Need to Know fell into my inbox, I couldn't resist comparing its contents against my own mental list of quirky writers and literary obsessions.

Written by Ian Haydn Smith and illustrated by Kristelle Rodeia, this volume covers a decent cross-section of slightly off-mainstream literature available to the English reading public. Some of the writers are better known for their poetry or essays, but all had authored at least one novel. (For those interested, the publisher's page reveals the full list of writers.)

Quakers, radicals and witches: a walk…
The Sign of Four
Proven Methods for Successful Weight …
5 Main Criteria When Choosing a Writi…
“The Friend Who May Not Seem a Friend… 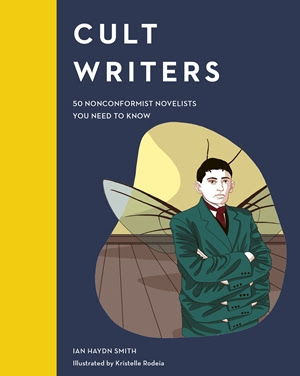 Note: The contents of my digital review copy differ slightly from the public list (swapping out five entries). I truly hope Eve Babitz and Joan Didion made the final cut over Joseph Heller and James Joyce.

I've read 32 of them, and obsessed over several of them throughout various phases of my life (though only one served as namesake for a pet cat).

Women writers are relatively well represented (23 of the 50). Regarding language, 18 of them do not write in English. All but 12 writers are dead.

Only one author had I never heard of (Juan Rulfo).

Each entry is topped by the writer's name and dates, with a pithy descriptive label, like "Chronicler of the Weird" (Murakami) or "The Literary Outlaw" (Genet) or "The Experimenter" (Lessing). Some of these are repetitive, not particularly insightful, arguably not even accurate, but I'd be hard-pressed to come up with better options — that's a tough exercise.

The entry covers a combination of biography, publication history, and public reception — it sticks to objective fact rather than attempt to offer insight. There is little attention to any particular work, but in most cases a style is attributed to the author — "Southern Gothic" (McCullers) and poetic Confessionalism (Plath) — and their work is described in broad thematic strokes. Every entry is complemented by an illustration of the author (that's Bulgakov below, and can you guess who it is on the cover?), and some of them feature quotations.

The book is indexed (mostly people, institutions, publications, and prizes) and includes a list of key works for each writer.

But how do you define the cult status of a writer anyway? Without setting hard and fast criteria, Smith focuses on the fervour of their readership and their transgression of genre boundaries.

However, for all its focus on their work, this book is ultimately about the creators. Which raises another question: is a cult writer defined by the work they produce or the life they have lived? As you will glean from the portraits included here, the answer is: both. More specifically, it depends on the life lived in the external or internal world of a writer.

I would dispute the status of some of the writers included (and here my own biases will be laid bare).

One stumbling block for me is that I don't think it's enough to have authored a cult book to be considered a cult writer. To me, you're only a cult writer if, having experienced your work, I'm compelled to search out and devour everything you've ever written.

By my thinking, JRR Tolkien does not fit the bill. The world he created is massive and influential; Middle Earth inspires worship, but Tolkien does not. Besides, he is too obvious and too present in our culture to be a discovery — cult status is reserved for the special, beyond mainstream. 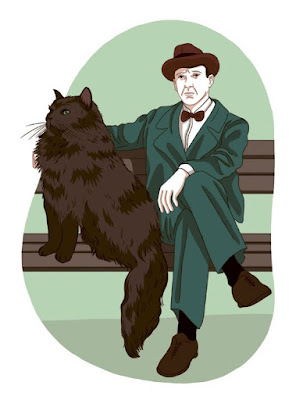 Pauline Réage authored but one book, The Story of O. She is, I think, unfairly labeled here as "the sado-masochist author," diminishing the sexual paradox of liberation in slavery that it explores and the controversial brand of feminism it inspires. While I think her novel is an important one and it enjoys elite status, the author, anonymous for years, remains essentially unknown.

And Ayn Rand. Does anyone read her seriously after high school?

But I was pleased to see Chris Kraus in this company (whose work I only recently discovered, and yes, I am compelled to explore more).

And then there are the inevitable oversights.

Smith justifies some of his choices in the introduction: "Thomas Pynchon stands in for other experimental writers such William Gaddis, Roberto Bolaño and David Foster Wallace." Even while they're all postmodernists, and often maximalists, they're quite different. I suspect Pynchon is less prevalent on college campuses today than the others. But maybe not. (Smith acknowledges, "Times are changing and so should this list.") Since the entries tend toward the biographical with only a minimal attempt to place these figures on the literary landscape and describe their significance and influence, the idea that one writer might stand for a group isn't strongly conveyed. (I would've chosen Bolaño to represent this group, because he resonates more strongly with this millennium's readers.)

Smith nods at a few other writers that didn't make the cut (I would have included Mark Z Danielewski over several of the others).

The one writer missing who, in my view, absolutely ought to be here: Clarice Lispector.

Despite my quibbles, I love lists, and I think Cult Writers makes for a great coffee table book. It has smallish dimensions but the illustrations are a lot of fun. It's not the kind of book you read cover to cover; you flip through and learn a random fact, reminisce over the copy of Cortázar your ex gave you, be inspired to finally read Train Dreams.

I'd happily bestow this book on the right college student, possibly annotated to better mould their mind.

Whom would you include in a list of cult writers everybody needs to know?


This post first appeared on Magnificent Octopus, please read the originial post: here
People also like
Quakers, radicals and witches: a walk back in time on Pendle Hill
The Sign of Four
Proven Methods for Successful Weight Loss
5 Main Criteria When Choosing a Writing Service
“The Friend Who May Not Seem a Friend” – The Cat and the Fire, Post 2 of 3