The most fantastic and uptight and uninhibited person alive

Knots, by Gunnhild Øyehaug, is a heartbreak of insightful short stories. I stumbled upon this book in an outlet store, and it felt familiar and right to be reading it while visiting family and traveling home. It felt fantastic.

[I read Wait, Blink, a novel by the same author, just a few months ago and while I haven't (yet?) managed to write about it here, I was deeply moved by it.]

Most of these stories make me ache. Øyehaug uses repetition of certain phrases to great rhythmic effect. A few characters make appearances in more than one story. Everything is knotted together. 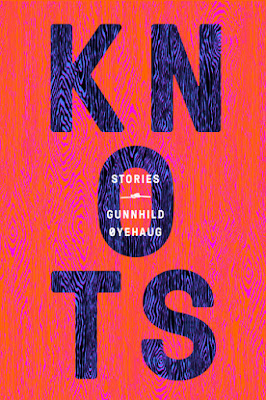 "Can't we sit down for a while?" she says. I nod. We find two green chairs and sit down. I look at her and think, almost in wonder, that this is the girl, this is the girl who straddled me and rode me hard on the jangling hotel bed less than an hour ago. That her fair hair had swayed back and forth above me. That she had had no one to bump into then, no boats to lose control of, no parents who thought that their child was hopeless at this, that she should let go of her inhibitions and not be so uptight. I am gripped by love, want to shake her, tell her that she's the most fantastic and uptight and uninhibited person alive. But I know that if I lean over and whisper that in her ear, and that I want to be with her for the rest of my life, that it's very likely that we'll do just that, stay together for the rest of our lives, I know that she won't say anything, her eyes will slip away, but she'll take my hand and squeeze it. That's all. Because she's not in love with me. I know that. I know she's in love with someone else in this town. Obsessed. Someone she tries not to talk about. Someone she tries not to look for on every street corner, in every gallery we go to. Someone we were supposed to meet here by the pond two days ago, but who didn't show up, someone she thinks she sees everywhere — I can feel it in the hand that's holding hers, a a faint start, she thinks she sees: a tall guy, with broad shoulders, a thin dark line. An ex. She looks at me: "Shall we go and get something warm to drink? I'm cold," she says. She's done with longing. Or rather: she wants to long a little more, as we leave the pond and she thinks that it's perhaps the last time that we'll pass this place. We stand up, and she takes my hand. Always takes my hand.

[From "The Girl Holding My Hand."]

The stories are simple, understated, short. I want to say that they're very female, but even though I read more women than men last year, I don't really know what that means. It's not the domesticity and the love and sex, but something about the matter-of-factness and the poignancy; everything is obvious and tragic. At any rate, they speak to me.

I can't pick a favourite. There are scenes of hurt and tenderness. There's death and violence. There's a deer. There's Rimbaud. Performance art and Arvo Pärt. There's when you need to pee, and when you need to run away. Longing and fear and regret. In "Transcend," a woman longs for an eternity of total fusion and considers protesting her current situation by not having an orgasm. "Meanwhile, on Another Planet" has a very Cosmicomics feel about it.

Excerpts
"Nice and Mild"
"It's Raining in Love"

Reviews
New Yorker: A Norwegian Master of the Short Story: Gunnhild Øyehaug dramatizes the critical consciousness, by James Wood: "She can produce stabs of emotion, unexpected ghost notes of feeling, from pieces so short and offbeat that they seem at first like aborted arias."

It seems pertinent, even polemical, then, that the characters in Øyehaug's stories are all concerned with the need to be seen and heard. From lonely women to existential deer to two-timing husbands stranded in snow banks, Øyehaug's characters yearn for acknowledgement and reciprocity, and for the equilibrium that such a bond, or knot, promises. Most often, though, they’re denied recognition.

In the place of recognition, the characters are left with a sense of longing, paired with a deep-seeded disappointment, which announces its presence on every page of this book. Øyehaug's work constructs an ecology of longing. Of failed epiphanies. Of unsatisfied women.

The most fantastic and uptight and uninhibited person alive