Step by step until it is done

Nothing special has happened today; no one can say she was more provoked than usual. It is only that every day one grows a little, every day something is different, so that in the heaping up of days suddenly a thing that was impossible has become possible. This is how a girl become a grown woman. Step by step until it is done.

A fascinating premise, and a book for our times, the execution was weak and formulaic, with characters I didn't care about.

What The Power does do quite cleverly is flip gender expectations upside-down.

Boys dressing as girls to seem more powerful. Girls dressing as boys to shake off the meaning of the power, or to leap on the unsuspecting, wolf in sheep's clothing.

I'm surprised this book wasn't written before now; it's as if it were waiting for its time. 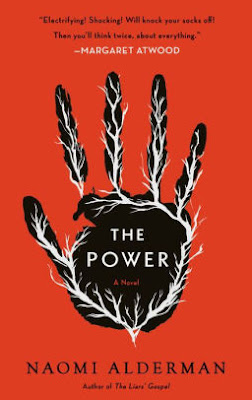 Girls have evolved to have an organ of electricity; they can channel this "power" through their fingertips like lightning. It can kill.

This sets the world on fire, with women wresting control from abusers, criminal, harassers, despots. Women take back the night, and then some.

As provocative as the ideas are in this novel, it feels like it was trying to do too many things. The cross-cutting of several perspectives, the overall pacing, the graphic nature of some scenes, the "real-life" politics (mentions of military training, UN sanctions, a play for oil) — these elements give the novel the feel of a thriller, of a genre novel. I'm not proud of myself for using that word ("genre") disparagingly here (I trust most readers recognize that I read broadly and I have nothing against genre-bending), but the novel packs all this in and more to the detriment of more meaningful plot and better realized characters. I suspect the work of a marketing-savvy editor with an eye on film rights.

That being said, The Power is a worthwhile thought experiment. Beyond the role switching, the novel questions power dynamics, the nature of power itself, and the corruption of individuals who hold it and wield it.

It also questions how we come by our basic assumptions of history, biology, and our place in the world. (This is particularly evident in the novel's frame; the story is established as a work of historical fiction speculating on the events that led to the global Cataclysm — it posits a kind of pre-history. I found the framing device really jarring, but I appreciate what it's trying to accomplish.)

In the New York Times (Naomi Alderman on the World That Yielded The Power), Alderman poses some supplementary thought experiments that are key to our being in the world:

If you and I lived in a world where women were dominant, would you be telling yourself: This is very unjust; I will fight for the rights of men?

The things you don't want to know, Roxy, those are the things that'll get you in the end.

Step by step until it is done